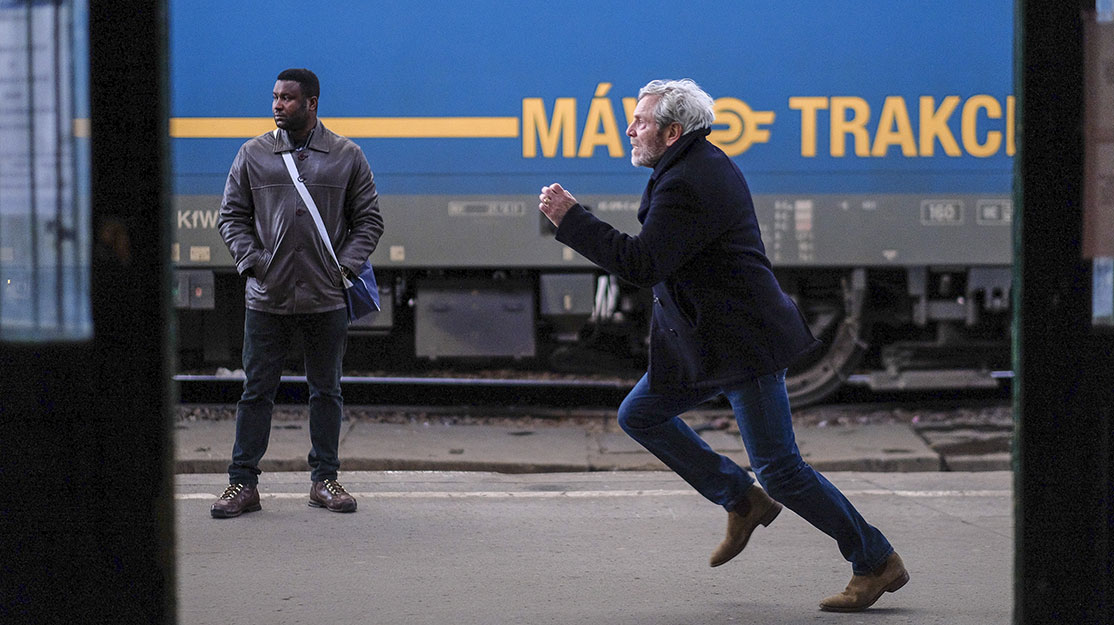 Baptiste star Tchéky Karyo and producer John Griffin discuss the return of Julien Baptiste in the BBC crime drama as the retired police detective picks up a new case that takes him into Budapest’s corrupt underworld.

Across two seasons of The Missing and its spin-off series Baptiste, the exploits of retired French police investigator Julien Baptiste have taken him across Europe, from France and Germany to the Netherlands. Now, as Baptiste returns for a second season, he travels to Hungary to lend his support to another missing persons case. But as personal tragedies in his own life begin to stack up, will this be the case that finally breaks him?

BBC and Starz drama The Missing launched in 2014 with Baptiste joining forces with a father still searching for his son eight years after he disappeared during a holiday in a small French town. Season two in 2016 saw him become embroiled in the case of a missing British girl who suddenly reappears in her German hometown 11 years after she vanished.

The investigator then took centre stage in his own series, which first aired on BBC1 in 2019 and Masterpiece on PBS in the US in 2020. That story took Baptiste, after undergoing surgery for a brain tumour, to the streets of Amsterdam, where he is asked by an old Dutch police friend to help find a missing sex worker.

After experiencing huge personal tragedy, he now returns for a second season of Baptiste, which finds the titular character having pushed his wife Celia away and looking for any distraction to consume him. When British Ambassador Emma Chambers’ husband and two children disappear one night during a skiing trip in the Hungarian mountains, Baptiste commits himself to helping her find her family. But working with a police force he doesn’t trust and in the face of unrelenting media hunger for information about the high-profile case, he must try to remain rational if he is to solve a mystery that takes him into the heart of Budapest’s secretive and corrupt underworld.

“In The Missing season one, we are with someone who is in a happy family,” says Tchéky Karyo, who plays Baptiste. “Then we realise in season two he has a tumour, he goes through hell having hallucinations and fighting to tell the truth about this case he’s working on, but he survives his surgery. When we start with the first season of Baptiste, he is at the bottom of himself and the bottom of a lot of bottles, being angry, punishing himself and going through a masochistic state. We see someone yelling at the world.

“When we start now [in season two of Baptiste], he is in some deep, dark places that he will have to deal with, but he will eventually get out of the trap he is in because of the empathy he has for this woman he is trying to help.”

A major difference between the first and second seasons of Baptiste is that S2 plays out in dual timelines, returning to a format more similar to The Missing. In the present, Baptiste is a broken man, trapped at the bottom of a bottle, before the story flashes back to see him join the search for the family of Emma Chambers (played by Fiona Shaw), who disappear in mysterious circumstances one evening.

“One of the really exciting things for me in this show is the fact that a major unique selling point is each season of The Missing and Baptiste have been in different countries,” says producer John Griffin, speaking with Karyo ahead of the C21 Screenings Digital Premiere of the first episode of Baptiste S2. “We’ve been to France, Germany, we were in the Netherlands last season and this time we’re in Budapest. We start in the Hungarian mountains where the British ambassador is on a skiing holiday and her entire family go missing.

“Julien Baptiste, for the want of something to do because he just needs to run away from his own life due to his own personal tragedy, comes here doing the only thing he knows he can, which is to help somebody find their family. The journey he and Emma go on is really complex. They have some very similar demons to deal with but it also brings them into enormous conflict at times.

“Between them, and working with a Hungarian police officer, they uncover quite a dark story that takes us into right-wing politics in Budapest, and a lot of things unfold that are very interesting. Julien has to go on the most extraordinary journey, and you get to a point halfway through the story where you go, ‘Ah, that’s where we started back in episode one,’ and the timelines converge. It’s very exciting.”

As viewers will see, Baptiste sports a rather unruly beard in one of those timelines, with Karyo spending six months letting his facial hair grow out for the role. He even turned down some other projects, such was his commitment to returning to the series, which he describes as a “gift in the life of an actor.”

“I had to let my beard grow,” the French actor says. “I was excited to play with the versatility of this story and this character, and excited to meet Fiona Shaw who is this amazing personality and full of love and hope and talent. We’ve done a lot of theatre, she worked in France. As much as I love to speak English, she loves to speak French so we had this in common. We played chess together sometimes. I loved the way she questioned the situation; she’s not afraid to call a cat a cat and doesn’t take things for granted – she’s always shaking the material. It was exciting to come every day and be with her and go together on this road.”

The six-part show comes from writers Jack and Harry Williams, who created The Missing and can also count Fleabag, Liar and Cheat among the shows to have emerged from their Two Brothers Pictures prodco. All3Media International handles global sales of Baptiste.

“They know this character as much as I know him,” Karyo says of his partnership with the creators. “When I work on what’s happening behind the lines, they say you know him [as well as we do]! The Missing was their first project as Two Brothers; they created that company out of it and we had this amazing welcome throughout the world. We grew up together.”

Of course, filming season two of Baptiste wasn’t as simple as Griffin had hoped when production first began, with the pandemic forcing production to shut down about halfway through the shoot. “It’s been an exciting and unusual year,” he says. “Hungary was an amazing place to shoot. They have fantastic film crews and we had a brilliant partner production company there that helped service all the locations and let us show off the beautiful parts of Budapest and Hungary generally.

“One of the lucky things was when you’ve got a character with a huge beard in one timeline and not in the other, we couldn’t shoot anything of Julien without the beard until we’d shot everything with the beard, and we achieved that a week before we stopped, which was a hell of a blessing because otherwise poor Tchécky would have had to hang on to the beard until September [last year] when we finished shooting.”

Picking up the remaining scenes five months later was “incredibly challenging,” after having to quickly repatriate everyone back to the UK before it went into lockdown last March and Hungary enacted its own measures. The solution was to mostly finish the shoot in the UK, though some additional filming was completed in Hungary where scenes couldn’t be faked, such as those featuring the Danube.

“But we were again lucky a lot of the last episodes are set in rural countryside, which we were able to cheat in the UK,” Griffin says. “We’ve had three different crews on the show, which has been exciting and sometimes challenging. All in all, it was rather good fun.”

Karyo picks up: “It was, especially when we went back to England and I had to do two weeks in quarantine. But the protocol for Covid was so well done. We were tested twice a week; not one case happened. The production team were so good in England with Covid. It took more time in France to get straight with the situation.

“When I was working with Noëlle [Keruzoré], my dialogue coach, John came and said we had to pack, that Hungary was closing the border, France was going into lockdown and all the English team were anxious to get back to their country. From one hour to another, we were packing, then we left and the Hungarian team prepared for the lockdown. Then we were waiting anxiously to go back to the production. Luckily, they found a way to manage the logistics in England. It was really fantastic.”

Viewers in more than 180 countries across the Americas, Europe, Asia Pacific and Africa have now followed the investigations of Julien Baptiste, who returned to BBC1 last night for the second season of Baptiste. Griffin puts the popularity of the show down to the title character, whom he picks out as one of the most unique and interesting detectives currently on screen.

“He has so much empathy and understanding of human nature, and that’s his special skill as a detective. That, and the fact he takes you into countries and teaches you things about other cultures while he does it, which for me is what makes it an extraordinary show,” the producer says. “This season absolutely won’t disappoint. If you enjoyed the first season of Baptiste, you’re in for a really exciting ride and one that’s bigger than last time.”