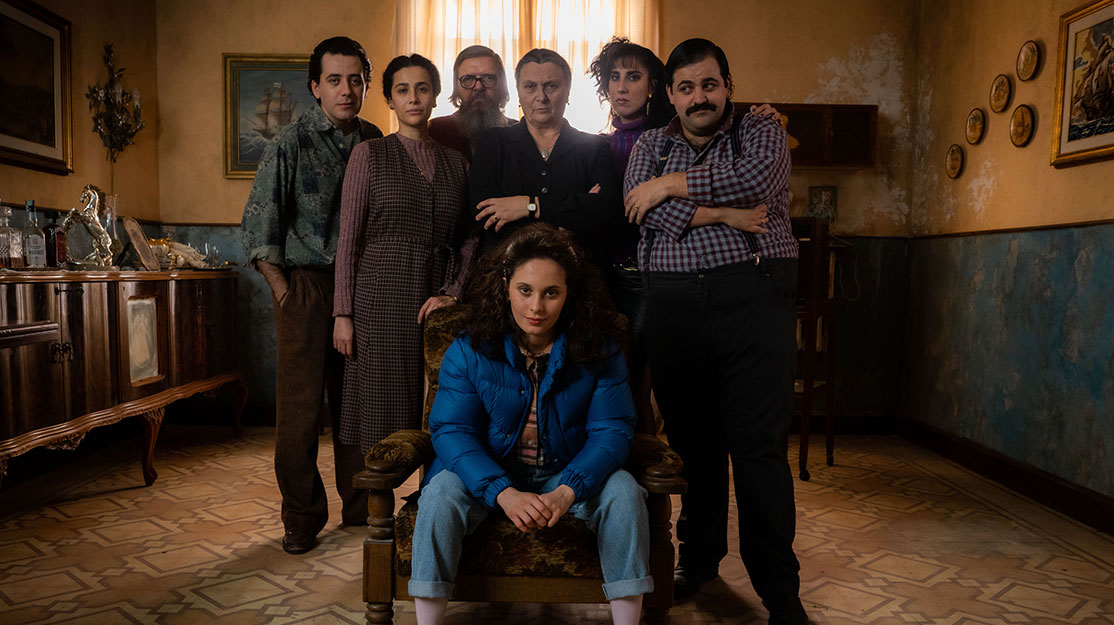 Bang Bang Baby star Arianna Becheroni and lead director Michele Alhaique discuss the making of Prime Video’s first Italian original drama, in which a teenager discovers she has a unique connection with the mob underworld in 1980s Milan.

The 10-part series, which launches worldwide tomorrow, introduces 16-year-old Alice Giammateo, who lives with her mother Gabriella in a small, unremarkable town in northern Italy. Her life changes irreversibly when she discovers her father, who she believed was murdered years earlier, is in fact alive. Determined to see him, she sets out for Milan where she is charmed by her father’s family, the Barones – a dangerous mob clan led by her ruthless grandmother Nonna Lina, who leads Alice’s decent into a life of crime.

Speaking to DQ ahead of the show’s world premiere in competition at French television festival Canneseries, Becheroni and Alhaique talked about why the show is a unique take on an Italian mob story, developing the character of Alice and recreating Milan in Rome.

Arianna, introduce us to Alice.
Becheroni: She’s a normal girl, a teenager, but she discovers her dad’s alive all of a sudden, and this is going to be a turning point in her life. It will define the rest of her life and her actions as well because, after the initial shock of discovering her dad is alive, she’s going to slowly begin to enter this underworld and she will change. She will no longer feel like a victim; she will start taking the initiative. This is basically the beginning of a transformation.
She starts off being a very fearful, shy girl before, because of her need for her dad’s love, becomes more and more determined. In the end, she’s going to come out on top and grow into a real woman as a result of this experience.

How did believing her father was murdered affect her growing up?
Becheroni: Obviously growing up without your dad has to be dramatic. I can imagine Alice going to bed at night and thinking of him, maybe saying, ‘Good night, I miss you, dad.’ The thing is, she doesn’t even understand why, after discovering that he’s alive, he hasn’t been looking for her. This is what motivates her initially to go and look for him – she wants to understand why she wasn’t wanted. Then all of a sudden, after meeting up with him, she realises that what matters isn’t so much why he hasn’t been in touch with her all these years, but what she can do now to be close to him. This is her main aim.

This is your first lead role. Why were you interested in the project?
Becheroni: I fell in love with the character of Alice straightaway. I felt an immediate connection with her, so I wanted the role. Then I was called in to see Andrea Di Stefano who, after a while, said, ‘Do you feel ready for this? Do you really feel you can play this role?’ And I said, ‘Yes, definitely.’
I met up with Michele afterwards and we worked together on the character, we went through the script and we went through all the scenes. It was a long process but it was an essential one because it helped us understand the evolution of the character.

Alhaique: The journey Arianna made with the series is very close to the journey Alice takes in the story, because she started working with me before lockdown. She was with the character for a long time. She had so much time to think about it, to read the scripts together [with me] and alone by herself. She did something unique – she wrote down her thoughts about the character and then she let me read them. It was exciting because she grew more and more into the story and the journey.
What also helped was I needed to find actors for the other roles and she was always there with me, so we had the chance to work together for a long time with many different actors and other directors. That allowed us to know each other and work on the character too.

Arianna, what was it like to be so involved in those early stages?
Becheroni: It gave me the opportunity to feel a connection in a deeper way, in an almost visceral way. I stepped into the shoes of this character. The pandemic helped me in a way because it made my desire to act even stronger. I was really motivated; I was raring to go the first day when I got to set. Professionally, working with Michele was so positive. I couldn’t wish for a better director, and we created Alice together. She is a complex character. Michele helped me because he simplified the way I could get into it.

Michele, why was this a story you wanted to tell?
Alhaique: It’s a unique story. What appealed to me first was that the script was very complex. I was both excited and very frightened reading the script because I didn’t know what would be the right tone to use. I had to read the script many, many times before I knew how to create an organic way to pass through the mix of crime, comedy and teen drama.
Everyone involved – from set decoration to cinematography and costume design – helped me to find the right way. This series was a chance for everyone to be creative. For the first time, everyone had in front of them something new; and when you have something new, you can manipulate it as you want. Of course, I was conducting the orchestra, but everyone was necessary.

The series is notable for slow zoom shots and bursts of neon colour and light. How did you design and achieve this eye-catching visual style?
Alhaique: It’s been a lot of work finding the right way to tell the story. I started with Alice – she was my point of view to tell the story. I wanted the audience to feel led by the hand, like Alice was bringing them on a journey into this world. I understood that large lenses and slow movement of the camera could help me to tell the story in the right way.
Recreating 1980s Milan was a challenge because we were coming out of lockdown in Rome, where the production company is based, but we weren’t allowed to go to the north of Italy, to Milan, so we had to reinvent Milan in the 80s in Rome in 2020. It was a nightmare but, in every scene, I focused on just one thing and that prevented me from going crazy trying to find Milan in Rome.
For example, in the second episode, there are some guys who arrive from the south and come to a square. I couldn’t use the real square, so I used some crossroads and we made a big billboard of a woman with make-up, and I focused on the billboard to set the scene in Milan in the 80s. At the end of the shoot, we shot in Milan for one day, so everything you see in the series is Rome and our way of bringing Milan to Rome.

Arianna, how would you sum up your experience of making the series?
Becheroni: It was fantastic for me because this was a flamboyant character to play and a multi-faceted one too, who lives a million lives in one single life. To be able to play that role was just fantastic. It gave me the chance to play a character I don’t think I’ll ever find again.