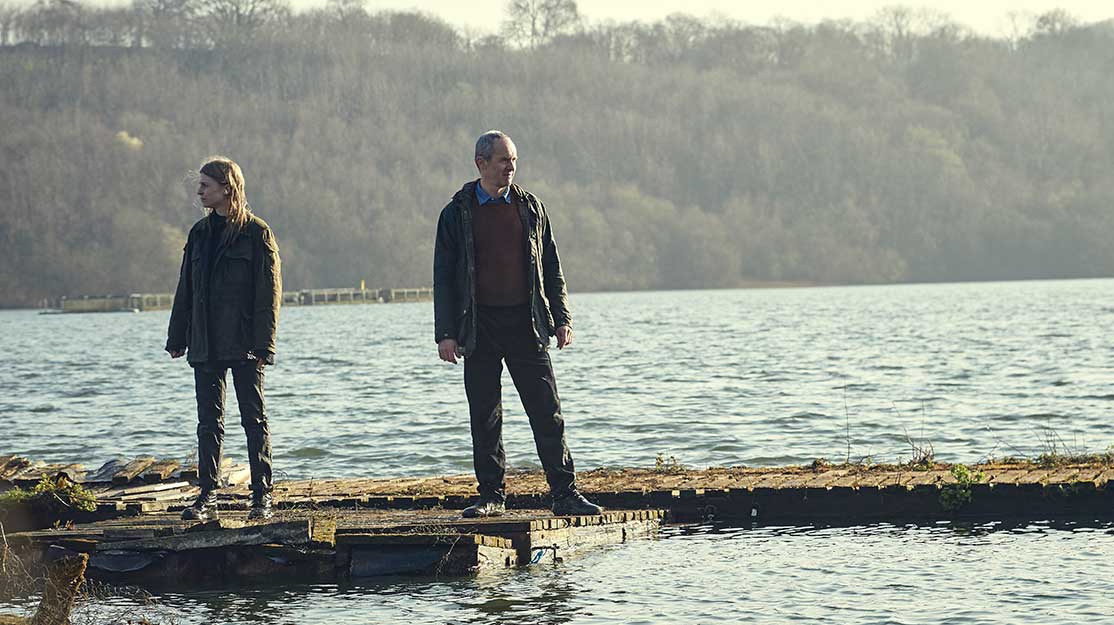 Back with a Vengeance

Ahead of the launch of Anglo-French drama The Tunnel’s third and final season next week, DQ visits the set to find stars Stephen Dillane and Clémence Poésy in an optimistic mood and a new lead writer taking the show back to its roots.

The Tunnel has never been a series to take the easy path. Its Anglo-French take on the beloved Scandinavian culture-clash police drama Bron/Broen (The Bridge) risked charges of mere imitation, while filming in the Channel Tunnel represented a logistical high-wire act.

Most recently, external factors – Brexit, the withdrawal of original coproducer Canal+ and showrunner Ben Richards standing down – have combined to make the third and final season, subtitled Vengeance, another tricky proposition.

Yet when DQ meets cast and crew in a terraced house above Dover train station on a baking hot May day, optimism abounds. Much has changed for the leading pair of coppers, Karl Roebuck and Elise Wassermann, in the eight months since they brought down a ring of international terrorists. The perpetually careworn Karl (Stephen Dillane) is in an uncharacteristically happy place, reconciled with wife and family.

“Part of the difficulty of the second season,” recalls Dillane, reclining in the front garden in an uncomfortable-looking tweed suit, “was that this awful thing had happened [the murder of Karl’s teenage son], but it was important not to become morose or depressed. That was hard to pull off. You could decide this man was utterly floored by his son’s death, which would be a reasonable character choice, but here, he’s not. We’ve had to move things on now, and he’s in good shape: still a detective, happy enough with work. Family life has changed, but he seems alright.”

Similarly, Elise was left in disarray, betrayed by her lover and almost blinded by a pathogen that was injected into her eye. “I was up for having a scar,” laughs Clémence Poésy in the back garden, wearing Elise’s de facto uniform of shapeless jumper and black skinny jeans, “but she’s made a full recovery.”

Physically, if not psychologically? “Yeah, she starts Vengeance in denial. She’s made lots of very rational changes to put the events of the last series behind her, but something’s not quite right: she grinds her teeth a lot and breaks a tooth in her sleep. If it seems to be under control, it probably isn’t, and Karl coming back breaks that cycle.

“Season one felt like Elise opening up to someone then trying to protect that person, season two was the opposite, with Karl seeing her vulnerable and trying to protect her. Season three has them both going through a lot without sharing everything. Karl is worried about Elise and Elise is unsettled by decisions Karl is making.”

With former showrunner Richards stepping aside to work on the BBC’s adaptations of JK Rowling’s Cormoran Strike books, Emilia Di Girolamo, lead writer on Law and Order: UK, came on board. “Ben looked at complex geopolitics with [second season] Sabotage,” she says. “It would have been easier to go bigger and more epic, but I wanted to take it back to its roots and have an intensely personal, emotional story. I worked in prisons for eight years and have a PhD in offender rehabilitation, so it mattered to me that the killers’ motives are rooted in their experience. In this case, that’s trauma and loss. I get excited by how horrifying human nature can be when a person has been so damaged that they have nothing left to lose.”

The Tunnel’s final season, which begins on Sky Atlantic on December 14, revolves around crimes fuelled by the refugee crisis. “We were writing as the refugee camps in Calais were being dismantled,” says Di Girolamo. “I remembered reading these articles about 10,000 unaccompanied refugee children who were missing in Europe. As a writer and a parent, I couldn’t ignore this startling statistic, so I asked the question behind the story: how can one child’s life be worth more than another’s?”

And then there is the spectre of Brexit hanging over a show that pivots on the fragility of cross-Channel relations. “Nobody in the writers room really believed it would happen,” recalls Di Girolamo of the UK’s vote to leave the European Union. “But while we’ve got a few Brexit gags and have ramped up the unease between our French and British characters, we wanted to focus on the case and the characters. It wouldn’t have massively affected the drama if we’d voted Remain.”

The Tunnel itself experienced something of a ‘Frexit’ with the withdrawal of coproducer Canal+ (which, it is anticipated, will be airing the series in France as an acquisition), yet this decision was, in reality, neither a huge surprise nor unduly problematic, says executive producer Karen Wilson.

“Sky were clear they wanted a final season, whereas it was a big thing for Canal+ to even come back for a second. Their involvement would have been a bonus rather than something we were anticipating, because historically they haven’t done returning series. They also have a different way of working: they expect to have all their shooting scripts before going into production, but no one in Britain works like that. The European aesthetic and English-French coproduction are what have made this show unique, so rather than running away from it, we decided to embrace the challenges and the differences. We’d reached an entente cordiale by the end of season one!”

In some ways, it was even a positive development. “It’s a lot simpler working for one broadcaster than two,” says fellow exec producer Manda Levin. “We had a story meeting where all the British people were thinking the audience would never forgive Karl for his fling, but the French people didn’t get that at all – he’s just shagged a really sexy woman! We came at stories really differently, but we do miss their robust script notes that pushed and challenged us. They forced us to involve the French perspective even when that was difficult from the start, and that’s what made the show feel a bit different and made us work in a different way. By season three, we knew how to do that, so I hope Vengeance won’t feel any less French.”

Logistics were easier this season, with French sequences shot in one six-week block, sandwiched between English shoots of similar lengths. The active participation of [Channel Tunnel operator] Eurotunnel further smoothed things, and also of course afforded enormous creative opportunities. The Tunnel remains the only TV series to shoot inside the Channel Tunnel itself, although documentaries and commercials have been given access on occasion. Producer Toby Welch has nothing but praise for the Eurotunnel team, especially in meeting some of the final season’s more challenging briefs, which included rats swarming over one character.

“We can’t compromise their security or disrupt their business, so the challenges they faced to make it work for us were huge. While we did use some CGI, a member of our art department still had to count in and count out 200 dead rats meticulously while a member of Eurotunnel oversaw it. There was as much attention paid to the number of dead rats going in and out of the tunnel as there was to crew members [three Eurotunnel staff were required to be in attendance for every member of The Tunnel’s cast and crew], and rightly so! We also had access to some phenomenal properties outside the tunnel: at the beginning of season three, [Eurotunnel’s director of public affairs] John Keefe took us on a tour of cool things that hadn’t been in the show yet, so Samphire Hoe in Kent features prominently in the final season.”

Perhaps appropriately, having invoked a plague of rats, the biggest challenges were presented by some pretty Biblical weather on Samphire Hoe itself, a nature reserve created from almost five million cubic metres of chalk marl excavated during the tunnel’s construction.

“Samphire Hoe is quite exposed to the elements,” Wilson explains, “so prior to filming a big sequence there, the production team looked at the weather for the last eight years and identified the week that has always had kind weather. Inevitably, it was awful! They closed the road from Dover and some people couldn’t even get to the location. We lost a day but it all came together in the end.”

Many of the off-camera team members from previous seasons have returned, among them director Gilles Bannier, a veteran of French crime thriller Spiral, who filmed the second half of the season; the first three episodes were helmed by Taboo and Jordskott director Anders Engstrom. The show gave Bannier the platform to realise his ambition of working in British television – he has since directed both Tin Star and In the Dark – and it remains a unique proposition on his CV.

“My trademark style is based on documentaries, where I began my career – I used to be very handheld. I wanted to keep [The Tunnel] simple, to look after the beauty and cinematic side of it and to make sure the police work felt real, but also to hold the characters at the centre and foster the dark, baroque feeling that is part of The Tunnel. It’s totally different to all the crime shows I’ve done. In France, the idea of the auteur is still very strong, while on UK television the writer is the most important. For The Tunnel, it was a true collaboration between the writers, directors, producers and execs, which I loved.”

In the absence of Canal+, Bannier and French adapter Eric Forestier (who also directed Poésy in 2008 feature La Troisième Partie du Monde) helped ensure the accuracy of the French aspects. “We would ask whether we’ve done the equivalent of getting a 19-year-old into Wetherspoons and asking for a cherry brandy,” laughs Welch. “They told us what smelled French, even down to the names of characters.”

This final season, produced by Kudos and distributed by Endemol Shine International, will be leaner than ever, running for just six episodes – a decision, the team insists, that was driven by creative rather than financial reasons. “With six episodes, there’s something exciting about being so near the end, even at the start,” says Welch. “It’s nice to have a new format, because there’s no point in repeating ourselves, and there’s something very satisfying about having a trilogy.”

And a trilogy it will remain, Levin confirms. “Knowing we won’t see Stephen and Clémence on screen together again makes me sad, but we do them justice. We started The Tunnel with a man losing his son. Emilia loves writing about parents, children, love and loss, so there was a real circularity to the series. Going out on a high is the way to go.”

For Wilson, the series’ legacy is significant. “I started at the BBC and every story we developed had to be completely British. The idea of subtitles on BBC1 was anathema, and the world has evolved so much since then – in terms of stories we can tell, there are no holds barred.”