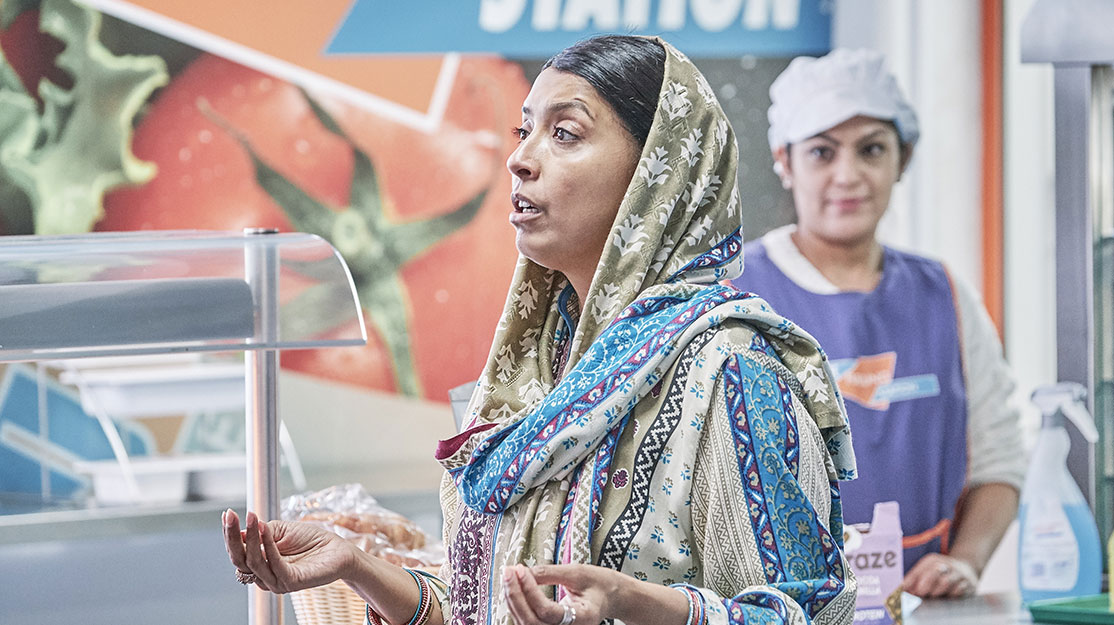 Ackley Bridge star Sunetra Sarker tells DQ about how the school-set drama has been revamped for its fourth season and discusses her role behind the scenes as an associate producer.

An hour before Channel 4’s school drama Ackley Bridge returned for its fourth season, actor Sunetra Sarker set up an account on video-sharing social network TikTok. Her fascination with social media, the show’s young audience and her “fear of missing out” meant she was keen to find out what viewers were saying about the series using the #AckleyBridge hashtag.

“I have to get down with the kids, that’s what the show’s about,” jokes Sarker, who has played Kaneez Paracha since Ackley Bridge launched in 2017. “I’m out of my depth now because I’ve joined and the kids have gone crazy because Ms Paracha’s on TikTok. I don’t quite know what to do now. I’ve created a monster!”

Ackley Bridge has previously used social media to reach out to its viewers – most notably during season two, when extra scenes could be watched via Snapchat – and Sarker says this is an example of how TV shows must try to speak to younger viewers.

“In the old days, TV was like another planet to the people sitting at home,” she says. “It was so glamorous, it was so unreachable. And now we’ve brought it so much more into people’s homes. We have to step up as actors, producers and directors and we have to be aware of this ever-changing world we’re a part of.”

Streaming has further broadened Ackley Bridge’s audience, with viewers able to catch up with the show during a year of Covid-19 lockdowns via C4 on-demand platform All4 or global streamer Netflix before new episodes were released earlier this month.

“Adult friends of mine contacted me who had just discovered Ackley Bridge on Netflix, and that has revealed a brand new world of people who hadn’t been there first time around,” Sarker tells DQ. “With Covid and lockdown, people were searching for new things to watch, so many more people have seen things they would never normally see.”

Produced by The Forge (National Treasure) and distributed by All3Media International, Ackley Bridge was inspired by the real-life Lancashire and Yorkshire schools established to integrate white and Asian communities in some of the UK’s most divided towns. Over its award-winning first three seasons, it has blended real situations and issues with humorous stories in an irreverent, insightful way.

Sarker says Ackley Bridge is far from simply being a series about a school, with the first season exploring how two different communities came together and the opportunities and ramifications that created.

“It’s more of a magnifying glass on a community we don’t see on screen a lot,” she says. “We all know a lot of those schools because we went to them, our kids go to them, but I don’t know if a lot of our audience has been to a school like Ackley Bridge.

“We’re trying to show the heightened versions of all of these characters’ lives and to make the drama be about what we know is happening but we don’t see a lot. This is the stuff we don’t get to get told about because it’s not the adults doing it. It’s what’s happening to the next generation in a multicultural world.”

Sarker’s character Kaneez is a mother-of-three who first works at Ackley Bridge as the school dinner lady and later becomes a student support officer. Through the first three seasons, she has been involved in plots relating to her arranged marriage with husband Iqbal and a new relationship with a teacher at the school. The show’s plots have also dealt with race, class, sexuality and drugs, among numerous other issues.

“A Pakistani woman in a scarf was never the lead in anything I’ve seen, but I get to have prominence in a show where I’m a dinner lady, I’m a working-class, poor woman, but Kaneez has got personality, she’s got humour, she’s got all this backbone,” the actor says. “She’s a real role model for a lot of women who have never seen themselves on TV, so I love the fact they’ve gone there and created this woman. But what I found really explosive were the storylines that made people come up to me in the streets, like when she found out her daughter Nasreen was a lesbian. That really created something.”

In that storyline, Kaneez initially struggled with the news about her daughter’s sexuality, but then embarked on a personal mission to understand more about what Nasreen (Amy-Leigh Hickman) was going through.

“We tend to grow up hearing about arranged marriages and we put everyone in a strict box. To open it up in our show – to have a daughter come out to her mum and then for her to have to self-learn and go to Hebden Bridge to go looking for lesbians to find out what this lesbian thing is about – the comedy of that, the humour and the entertainment really made people stick around for the rest of that storyline,” Sarker says.

“I was shopping and a woman just came up to me out of the blue and told me her daughter told her she was gay after watching that episode. I was so touched, and this was a Caucasian, Scottish woman who just wanted to stop and tell me she wouldn’t have known her daughter was gay had she not sat and watched the show with her. Her daughter turned and said, ‘That’s me, I’m going through that.’ We had loads of stories like that. We’ve explored so many touchy areas and we’re just bringing you into a world we don’t tend to see enough of on screen.”

Ackley Bridge has now returned for its fourth season in a new 18.00 time slot and with a fresh half-hour format, having previously comprised hour-long episodes. Beginning last Monday, its 10 new episodes are being stripped across two weeks, while the entire box set is already available to stream on All4.

As you might expect from a drama about a school, there is an element of ingrained creative renewal in a series in which characters naturally grow up and leave, allowing new characters to appear front and centre. Season four’s new arrivals include Kayla (Robyn Cara), a funny, awkward and loveable pupil who feels she doesn’t fit in either at school or at home, where she attempts to navigate both sides of her separated parents’ heritage, having a white mum and Pakistani dad. Her best friend, Fizza (Yasmin Al-Khudhairi), is a fiercely intelligent firebrand whose sarcastic humour and tough-girl attitude mask a more vulnerable side as she deals with a rocky relationship with her mum.

Another new pupil is Johnny (Ryan Dean), a cheeky, confident charmer from a Romany Gypsy community whose cocky ‘front’ and initial distrust of school reveals a sensitive soul, catching the eye of both Kayla and Fizza.

In developing season four, Sarker says its new half-hour running time – the same as that used for recent hit dramas such as Fleabag, I May Destroy You, Normal People and The End of the F***ing World – has given the show a “snappier” feel, while its run over consecutive nights makes it feel like event television. The original ‘play of the day’ format, where each episode would shine a spotlight on a particular character or story, has also been swapped for a more serialised storyline.

If Sarker – whose career began in 1988 and has included roles in No Angels, Casualty and Informer – seems particularly invested in the show, it’s a reflection of her involvement behind the scenes across all three seasons, which led to her being named an associate producer for the latest run.

“I was always very vocal about my character because I was playing someone I’d never seen on screen,” she says. “I just felt very responsible for being a ‘first’ in my eyes. From day one, I was asking questions and keeping the communication open between the producers, myself and the writers so that I could make sure I was hitting her right, because I am not a Pakistani woman who came over [to the UK] 16 years ago.

“I was born and raised in Liverpool. I come from a liberal Hindu family. My dad’s a doctor and my mum’s a dancer. I come from a very different world than this character I’m playing, so I’m very vocal about wanting to be involved in helping her be the best she can be.”

By season two, the actor was asking if she could be involved in the show from an earlier stage, not wanting to wait until she received the finished scripts. For the latest season, she was part of the early development process, a move that has allowed her to become a link between the young cast and the producers.

“I got to sit in on the storylining and I could contribute where I could with the writers. Similarly, I was also learning the process of how to build a story,” she says. “Becoming part of the producing team, I was so well supported. I really enjoyed how equal and welcomed I felt, because it’s a bit nerve-wracking, as an actor, sitting with the people who don’t usually see you in those rooms. I felt I could add something of value that I had’t been able to do before.

The latest season was into the fourth week of its 10-week shoot when production was paused last March because of the Covid-19 pandemic. Pre-production resumed in June, before the cameras restarted in September.

“What was interesting was being involved in these initial meetings with the line producers, and it wasn’t now about creativity and stories, it was more about the logistical planning,” Sarker says. “’How are we going to film a party scene now? How are we going to shoot kisses? What are we going to do about physical contact?’ We had to really look at scenarios. We had to downsize our locations and we had to find some more external locations.

“What I was really surprised at was the cost [of testing] and how expensive it really is to allow people to be in contact with each other. But when we came back in September, we decided not to address Covid at all [in the plot], and that was a good decision. It was the only decision we could make. Had we brought Covid into our storyline and made people wear masks in scenes, we would have found a lot of other difficulties. It was hard and we did work through it, but this is a show of two halves.”

Sarker is now preparing for a producing role on long-running BBC medical drama Casualty, in which she has appeared in more than 300 episodes, while she is also partnering with fellow Casualty alum Georgia Taylor for an upcoming episode of Channel 4’s Celebrity Gogglebox.

But in an age of renewed family viewing thanks to Covid lockdowns, she is encouraging older viewers to tune into Ackley Bridge with their families and use the show as a means to open discussions between different generations.

“This isn’t a kids’ show,” she asserts, adding that the series will offer different perspectives that viewers may not have considered before, such as Fizza’s relationship with her devout mother and her father who performs as a drag queen.