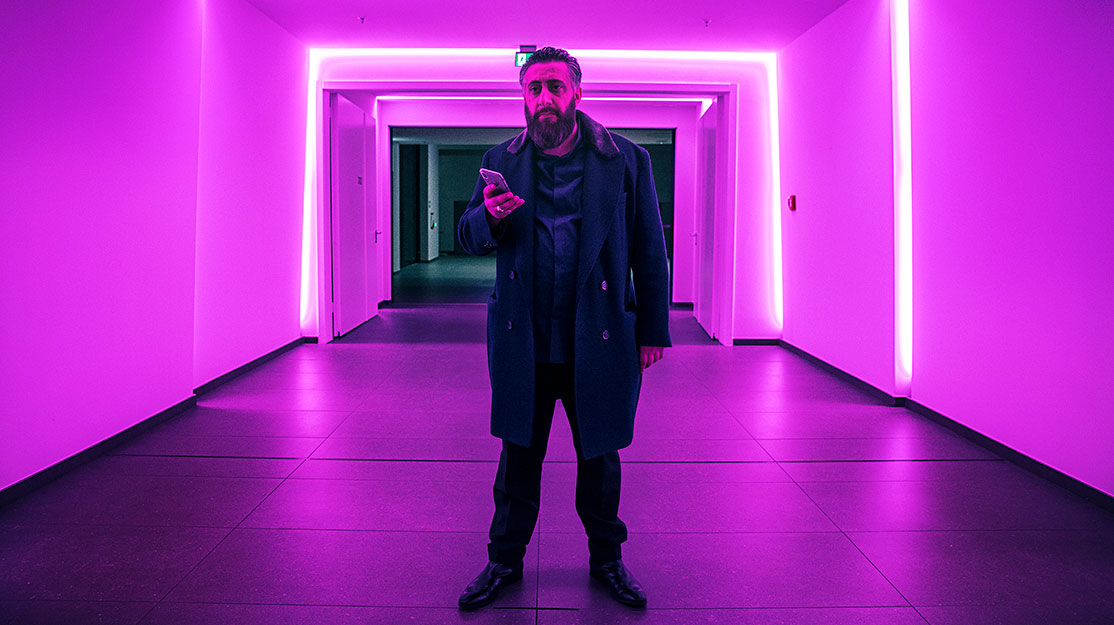 Back on the Block

As German gangster drama 4 Blocks returns for a second season, DQ visits the Neukolln district of Berlin, where the series is set, to met the cast and creative team behind the show.

Overlooking Berlin’s grand Neukolln Schifffahrtskanal, behind the towering Hotel Estrel, a group of industrial buildings has become home to the cast and crew of German gangster drama 4 Blocks.

Inside one of the studios, lead actor Kida Khodr Ramadan (pictured above) is reprising his role as Toni Hamady, the leader of the Hamady clan who finds himself in a bleak and desperate position. After the events of season one, which saw Toni break his own code by killing someone, he is a lost soul. In the episode-one scene being filmed when DQ visits the set during production of the second season earlier this year, he is losing himself to gambling.

“At the end of season one, we see Toni killing a guy, but at the beginning of the first season, he said, ‘We will never kill someone. That’s a line we won’t push.’ He certainly crossed that line,” Ramadan explains. “That does something to his character, I can assure you. We will see a slightly different Toni who’s haunted by that. It’s putting some pressure on him. It will be thrilling to see him, a character we love, struggle to cope with what happened, coping with new challenges coming from new enemies and taking the show to a whole new level.”

Set one year after the climactic showdown, season two of the TNT Serie drama sees a new enemy, the al-Saafis, enter the fray. Described as an upper-class clan, they export art and have connections to high society – but that doesn’t mean they’re any less criminal. It’s another issue for Toni to deal with as he continues to operate without the support of his brother Abbas, who is toiling away behind bars as he awaits trial for murder.

“He goes to jail and just feels left alone. He realises this beloved brother of his is not present and his hatred for him just grows because of that,” Veysel Gelin, who plays Abbas, says of his character. “His imagination runs wild. Then there’s a scene with a cop who says, ‘Well, where was your brother these past eight months?’ For him, that is like a volcano erupting, and he realises, ‘Yes, the little wanker, where was he?’ But they always try to make sure they stick to the family, no matter how much they may hate each other in that moment. No one really wants anything bad to happen to the other one. They stick to the family rules but, at the same time, Abbas also wants to show that he is also suited to be the boss now.”

Charting Toni’s rise from immigrant to clan boss, the series has been praised for its authenticity, both in terms of character and its setting, using the Berlin district of Neukölln as the home of the Hamady family. “I think you find people like Tony not just here in Germany but in Scandinavia and Africa,” Ramadan says. “We chose to shoot in Neukölln, where you find more of these people, but the research and background is absolutely solid and there are actually people in Neukölln who now call themselves Toni. It’s not a Mickey Mouse imitation. They say this is the real deal and that’s what they like about it.”

Inspired by a newspaper article about the challenges police face in certain areas of the German capital, notably Neukölln, 4 Blocks was developed by producer Wiedemann & Berg Television, TNT Serie, Kren and writing trio Hanno Hackfort, Bob Konrad and Richard Kropf. With all three writers returning for season two, they found their research process, which has proven key to the show’s grounding in reality, was much easier thanks to the success of season one, which also aired in more than 200 countries on Amazon Prime Video. The series is distributed by TNT Serie owner Turner.

They utilised a “slow and steady approach” ahead of the first season, speaking to journalists, police, politicians and people in the community. That was helped by Ramadan, who was raised in Neukölln and was able to introduce the writers to people living there.

“We had a three-year period of research ahead of season one because we had to do it very slowly and gain people’s confidence,” he says. “Now it’s an instant OK. ‘You’re from 4 Blocks? What can I tell you?’ It’s very easy now.”

Behind the camera, Oliver Hirschbiegel (Downfall) and Özgür Yildirim take over directing duties from season one’s Marvin Kren, who remains an executive producer. Together they have sought to echo Kren’s style, but the new run has also meant taking charge of more violent and action-heavy scenes. “The season is pretty much about getting close to the dark souls of these guys, and to their hearts as well – the good aspects and the evil aspects,” Hirschbiegel says. “It’s a good means to make the audience conspire with the naughty things these guys do.

“When it comes to the look and the feel, I think we’re on target to being pretty similar to what you saw in the first season.”

Yildirim says he and Hirschbiegel both took seriously the responsibility that came with inheriting the series from Kren. “But this is not about individual vanities, this is not about realising your own full potential,” he explains, noting similarities between 4 Blocks and his feature films Chiko and Only God Can Judge Me. “We don’t have to forcefully try to deliver some kind of highly stylised craftsmanship, but rather we should try to continue the work that was done in the first season.”

That work helped to cement a gangster series in Germany’s television schedules, with Yildirim claiming 4 Blocks is the country’s first drama to establish itself in the genre. This was achieved by treating the criminals as the protagonists rather than the antagonists.

“It was always odd for me to see that in Germany and, to an extent, the Scandinavian countries, crime drama was always told from the perspective of the police,” says executive producer Quirin Berg. “It was never from the perspective of the gangsters. The perception of the audience was that the police is always able to cope with things – ‘It’s Germany, hey, we have clean streets!’ – which, as we all know, is not the reality.”

Berg accepts season two, which has a budget north of €5.5m (US$6.3m), pushes its real-world grounding, but says genre series are able to stretch the boundaries of traditional dramas. “There is a lot of room for more to come, that’s for certain,” he adds.

Hirschbiegel picks up: “The thing with criminals is they step over lines and the more they do this, they don’t know the word ‘no,’ meaning they have to move on. It’s not easy to be a gangster. You live above the law. You live a free life but you pay a high price for that as well. It’s tough to be the head of a crime organisation, and part of that you will see in this new season as well.”

The focus on family as much as criminality has also given rise to a number of female characters, who are notable not just for their relationships to the men in the series but because of their own values, beliefs and backgrounds.

“If you look at Kalila [Maryam Zaree, Toni’s wife], she’s tough and confronts him. They’re really equal, while Amara [Almila Bagriacik, Toni’s sister] and Latif [Wasiem Taha] have a more conservative relationship,” executive producer Anke Greifeneder says. “Of course, the main thing is the male perspective but we fight a lot for the women’s scenes as well because they make it whole.”

Fellow exec producer Hannes Heyelmann says the varied characters are representative of modern-day Berlin, with none of them playing on stereotypes of Arab women. “Some have been here for a long time, some speak German at home, some speak Arabic, so it varies a lot and that’s what we try to show in the series – that the characters are different, just like they are different in Berlin today or in Germany in general.”

Hackfort says season two sought to challenge the different types of relationships between men and women in the series, with more female characters playing a part in the follow-up run. The writer adds: “It was the biggest challenge to deliver 4 Blocks 2.0, the next step, while keeping the DNA. That was a struggle and it was a long, sometimes painful, sometimes joyful but very intense process. But I think we managed.”