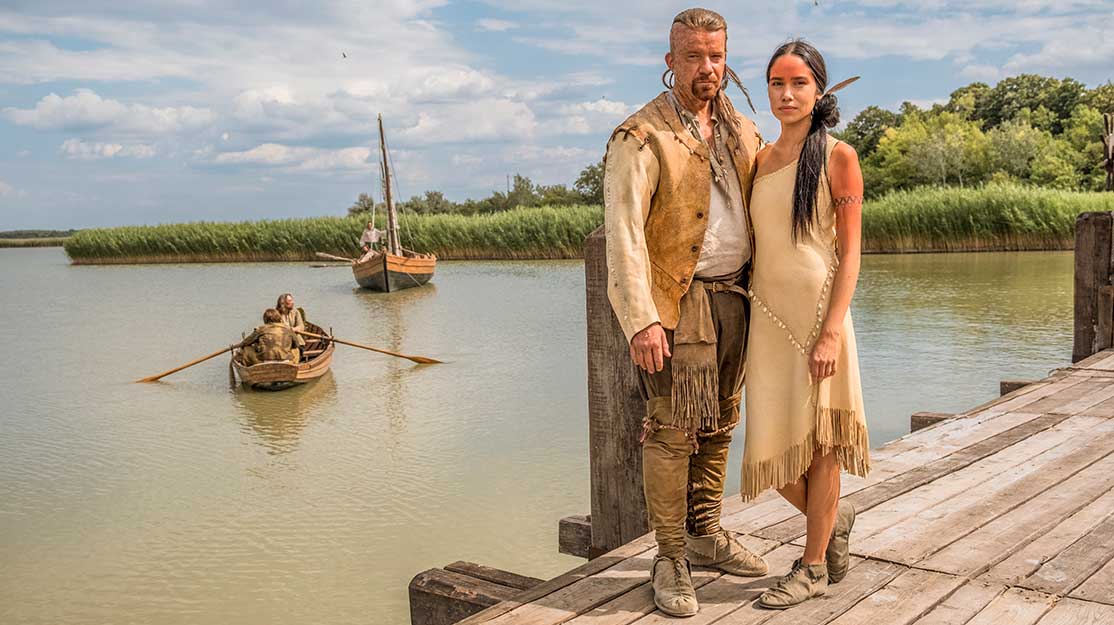 Sky1 is revisiting the American frontier for a second season of historical drama Jamestown. DQ travels to Budapest to meet some of the cast and creator Bill Gallagher on set.

Inside a Native American tepee that has been painstakingly constructed from dried reeds, we are chatting to a group of Pamunkey warriors in striking red warpaint and feathers in their hair. Behind us, a magnificent ceremonial cape made out of the gorgeous black and white plumage of an eagle is hanging from the roof. Nearby, the giant carcasses of a deer and a fish are draped over a sturdy wooden tripod. This feels – and smells – just like early 17th century America.

But it is, in fact, just one part of the spectacular set that has been built in a field outside Budapest for Jamestown, the Sky1 period drama about the beleaguered frontier town, which returns for its second season this Friday. So now there is a corner of modern-day Hungary that is forever 1619 Virginia.

The second season picks up the story of this battling settler community through the prism of Alice (Sophie Rundle), Jocelyn (Naomi Battrick) and Verity (Niamh Walsh). At the start of the series, these three intrepid women became the first females to set foot in Jamestown for 12 years.

But the second run of Bill Gallagher’s drama, which is produced by Carnival Films, does not just focus on the women. It broadens out to take in such dramatically rich areas as the effect of the settlement on the Pamunkey and the beginnings of the slave trade.

Rundle, who has also shone in Peaky Blinders, Dickensian, Happy Valley and The Bletchley Circle, takes a break between scenes and comes over to talk. We find a shady spot out of the broiling Budapest sun, which feels just about hot enough to cook a goulash.

Dressed in Alice’s splendid flowing dress, the 29-year-old actress begins by emphasising that the drama simply cannot overlook the subject of the treatment of the Pamunkey. “It would be a real failing if the Native Americans weren’t central to the story,” she asserts.

“It’s really important, otherwise we’d just be whitewashing history. In this season, there are many amazing scenes about the two communities interacting that you might not have expected. It’s vital that we get this storyline absolutely right.”

In Jamestown, authenticity is king. Kalani Queypo, who plays Pamunkey man Chacrow, is pleased the producers have gone to great lengths to ensure the accuracy of their portrayal of the Native American characters. “That’s one of the aspects of this production that’s really good,” declares the 31-year-old, who has also appeared in Fear the Walking Dead, Slow West, The Royal Tenenbaums, Aspen the Series and Saints & Strangers.

“When you tell Native American communities you’re shooting a drama featuring Native American characters in Budapest, the first thing they say is, ‘Oh no, it’s going to be a bunch of Eastern European actors with spray tans and bad wigs!’ But that’s not what we’re doing on Jamestown. The producers have brought over 60 Native American actors from the US and Canada. That’s amazing.”

Perhaps even more astonishing is the fact the production has revived the Pamunkey language, which had not been spoken in many decades. Queypo adds: “For the descendants of the Pamunkey to hear their language for the first time is incredible.

“It’s a great responsibility for us because when we speak that language, we’re calling upon those ancestors. We’re channelling a way of life. It’s very challenging to learn, but it’s been an absolute privilege.”

Trujillo, who has also starred in Apocalypto, The New World, Riddick and Sicario, continues: “For instance, the Native American victory at Little Big Horn has been described as ‘a savage massacre.’ Come on!

“Balance in the recounting of history has long gone. There have been 500 years of colonialist history, so this re-balancing has been a long time coming. Of course, we need to do far more, but dramas like Jamestown are really helping.”

Queypo picks up: “Historically in Hollywood films, Native Americans have just been a device to push the story forward. As a result, Native American characters have been very one-dimensional in the past. They have either been peaceful or warriors who want to kill white people for no reason. But Jamestown is very different. Here, the Native Americans are not just a device; they are multi-dimensional characters in their own right.”

The other major subject that is tackled in this season of Jamestown is slavery. Again, it is imperative for the cast and crew that the production does not try to gloss over the horror of the slave trade. Rundle affirms: “It’s vital to address slavery. And it’s not OK to get it wrong. You’ve got to tell these stories, or you’re rewriting history. We don’t want to be saying, ‘White people, how was it for you?’ We want to be saying to the people forced into slavery, ‘What was it like for you?'”

Jamestown, which is sold worldwide by NBCUniversal International Television Distribution, does not flinch in its depiction of the sheer brutality of life in the settlement. It underlines that the people who survived there had to be exceptionally tough. Nigel Marchant, exec producer on the show, calls it “a mixture of Jacobean drama and a western.” It certainly contains both those traits. It possesses a welcome sense of humour and is unfailingly entertaining, too.

But it also has many striking parallels with the world today. Gallagher, previously responsible for Lark Rise to Candleford and The Paradise, says: “Of course, I appreciate the times we live in. In the UK today, we’re free. But I also think the way people behaved in Jamestown can be a mirror to the way we behave now. We have still some fantastical beliefs and our ideas of justice are not always sensible.

“We don’t live in a time free from horrors. The idea of colonising countries in order to make money could be a reflection of the global economy today. There are all kinds of regimes these days which are not a million miles from the Jacobean way of inflicting order on people.”

But can drama ever really teach us anything? The Jamestown team believe so. Abiola Ogunbiyi, who plays Maria, one of the slaves brought into the settlement, muses: “I think viewers will learn something from Jamestown because they’ll identify with the characters. But what would be really awesome would be if audiences also got a sense from the drama of why things are this way now.”

The 27-year-old actor concludes: “The need for power and influence has very contemporary echoes. People have always used their religions and traditions to dehumanise other people and justify their actions.

“I’m afraid the desire to dominate other people has never, ever gone away.”