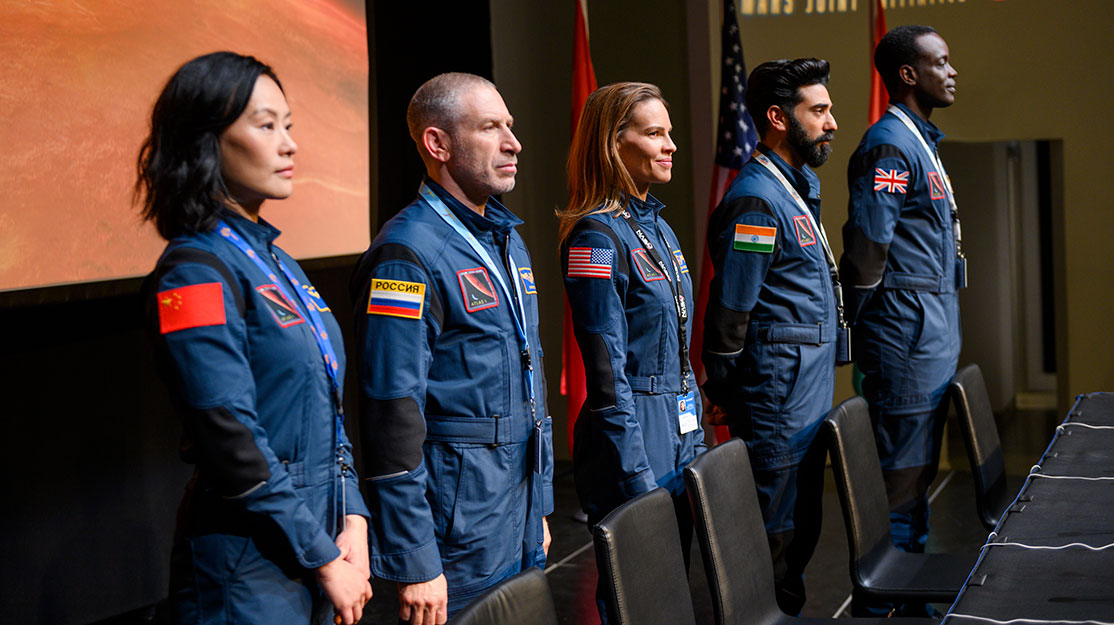 The Path creator Jessica Goldberg tells DQ about her latest mission, showrunning Netflix space drama Away, in which Hilary Swank juggles work and family while on a rocket heading to Mars.

With filming wrapped before the end of February, Netflix drama Away passed through post-production relatively smoothly, considering work was completed remotely because of the coronavirus pandemic. If only the crew of the Atlas-1 could enjoy as smooth a journey on their way to Mars.

The 10-part series, which debuts on the streamer tomorrow, stars two-time Oscar winner Hilary Swank (Boys Don’t Cry, Million Dollar Baby) as American astronaut Emma Green, who must leave her husband and teenage daughter behind to command an international space crew embarking upon a treacherous three-year mission to the red planet.

Josh Charles (The Good Wife) plays her husband and NASA engineer Matt Logan, while Talitha Bateman (Love Simon) is their daughter Alexis. Joining Emma on the ship’s crew are Ato Essandoh (Altered Carbon) as Kwesi, a British-Ghanaian botanist and the mission’s only rookie astronaut; Mark Ivanir (Homeland) as Misha, a veteran Russian cosmonaut and the ship’s engineer; Ray Panthaki (Gangs of London) as Ram, an Indian astronaut and the crew’s medic, co-pilot and second-in-command; and Vivian Wu (Cathy Yan’s Dead Pigs) as Lu, a taikonaut and the crew’s geologist and chemist.

Unfolding both on earth and in space, the story sees the crew members face personal and professional challenges as they battle against conflict, rebellion and a virus outbreak to keep their voyage on track, while Matt, Talitha and the staff of Mission Control in Houston face their own problems at home.

Created by Andrew Hinderaker, the series is loosely inspired by the Esquire article written by Chris Jones, who reported on astronaut Scott Kelly and a Russian cosmonaut as they prepared to spend an uninterrupted year aboard the International Space Station.

“I wasn’t interested in space but when I read the first version of Andrew’s pilot, there were two things about it that meant I knew I had to work on it,” showrunner Jessica Goldberg tells DQ. “We were already in a divisive time in the world but the show has this idea that the world came together [to support the mission to Mars]. This audacity of hope just made me feel like, ‘Oh my gosh, I want to work on something that talks about the world coming together, that isn’t dystopian and that dares to dream of what could happen if we all got together for a common goal.’

“The second reason I fell in love with the show was I really felt like it was the ‘working mother’ show. I had never seen a woman who loved her job and loved her family but where it wasn’t really the issue portrayed [in the story]. I just hadn’t seen that story articulated in that way and it really excited me to be a part of it. Then later I fell in love with space.”

Goldberg agrees that the space setting of Away serves as a starry backdrop to the very human problems facing the characters, as each member of the crew struggles with the relationships they have left back on earth. “That’s how I definitely felt with my entry point,” she says. “Now I sit down to dinner and people are shocked by my nerdiness [about space]. For me, it was about those two other things and this idea that, gosh, if we can get to Mars, the larger possibilities for science and exploration [are enormous].”

Goldberg came to the series as showrunner, writer and executive producer to work alongside creator and writer Hinderaker. The pair had previously worked together on Goldberg’s Hulu drama The Path, about members of a fictional religion, which ran for three seasons until 2018.

Their existing relationship meant that when it came to Away, “from the beginning, it was like we shared a hive mind,” Goldberg says. “We had a moment later where the astronauts have to write something to [the people on the] ground and, at the same time, we both said exactly what they would say. It’s an interesting process. When I read his original script, I thought, ‘I want to be a part of this and help tell this vision if he’ll have me.’ We both approach stories the same way. We came from character, a more philosophical way of thinking about storytelling, so it worked really well.”

Being a showrunner on any series, not least a Netflix drama set in outer space, is a huge job. But Goldberg says one of the first things she learned was how “vital” the writers are to the person in that top role. “I learned how much you need these other points of view,” she says. “You need the ways into the story that other writers can give you. I feel like it was a very inclusive writers room. Andrew and I tag-teamed everything so it allowed us freedom. I’ve never shared all those responsibilities, so that was kind of wonderful. For me, it’s about what other people can bring. Especially in a show that’s so international, you need the insight of other writers.”

The international make-up of the Atlas crew was established in Hinderaker’s first drafts, with Goldberg adding a British immigrant to the group of American, Russian, Chinese and Indian characters.

“It felt audacious to put a Chinese person and an American on the same ship. And also on the International Space Station, there are Russians and Americans. What’s so beautiful about the space station is none of the problems of earth exist up there,” Goldberg says. “You have a common goal in the space station, whether it’s going out to fix a telescope or taking pictures of the cosmos. It’s the idea that the earth is one planet and those lines of division, when you’re out there, don’t really hold the same weight.”

Away certainly uses some creative licence, seemingly set in the present day but in a world where a space station has been established on the moon. Goldberg says some elements have been heightened, but what was most important to her was that the story was grounded in reality. Real-life astronauts Mike Massimino and Don Pettit served as consultants and would help with ideas that felt too outlandish.

“Luckily Mike understood drama,” the showrunner says. “He would say, ‘That’s a little sporty,’ and that meant it would never happen [in real life]. It’s not an alien show. We wanted to start with anything grounded that could really happen on that journey to Mars. Of course, no one’s ever been that far so, as we go along, we take some creative licence.”

As the commander of the Atlas, Emma must face up to the challenge of managing the harmony aboard the ship, which is challenged by a near-catastrophic incident in the first episode, while also dealing with the battles facing her husband and teenage daughter at home. Goldberg says Swank was one of the first actors she and Hinderaker thought of after meeting several female astronauts during development of the show.

“We discussed the kind of strength, not only physically but also emotionally, that it takes to become an astronaut. And with Hilary, you believe she could be an astronaut,” she says of the actor, who is also an executive producer on the series. “When she came in, it turned out she had dreamed as a kid to be an astronaut. One of her early presents she remembers getting was a telescope, so that was super exciting for us. During the process, you can just tell she is a such a smart actor and really works hard on each script. She would come to us with really well-thought-out notes and ideas. As the show went on, it became more and more of a collaboration with her character in particular. What a gift it is to work with an actor like that.”

Making the series – which is produced by Universal Television, True Jack Productions and 6th & Idaho – tasked Goldberg to bring together a show that felt epic and beautiful, particularly during the few times the characters venture into space, but all within the confines of the budget. “I had always done shows that were very characterful, with people in a room, so this was a huge challenge to feel confident with all the special effects,” she says. “But I realise part of being a showrunner now is getting all the best people who know the most, and know what you don’t know, and putting all those people together, learning as you go and not being afraid that people know way more than you about the thing they’re experts in.”

A spacewalk in episode two is particularly dramatic, as Emma and Misha partner to fix solar panels that will prove vital to ensuring they can get to Mars. But ultimately, Goldberg says Away focuses on “intimate stories of the human condition” and how people from different cultures, classes and countries can find common ground and work together. “What moves me so much about this show is, if we could be doing that in our own lives, it would be such a powerful thing.”