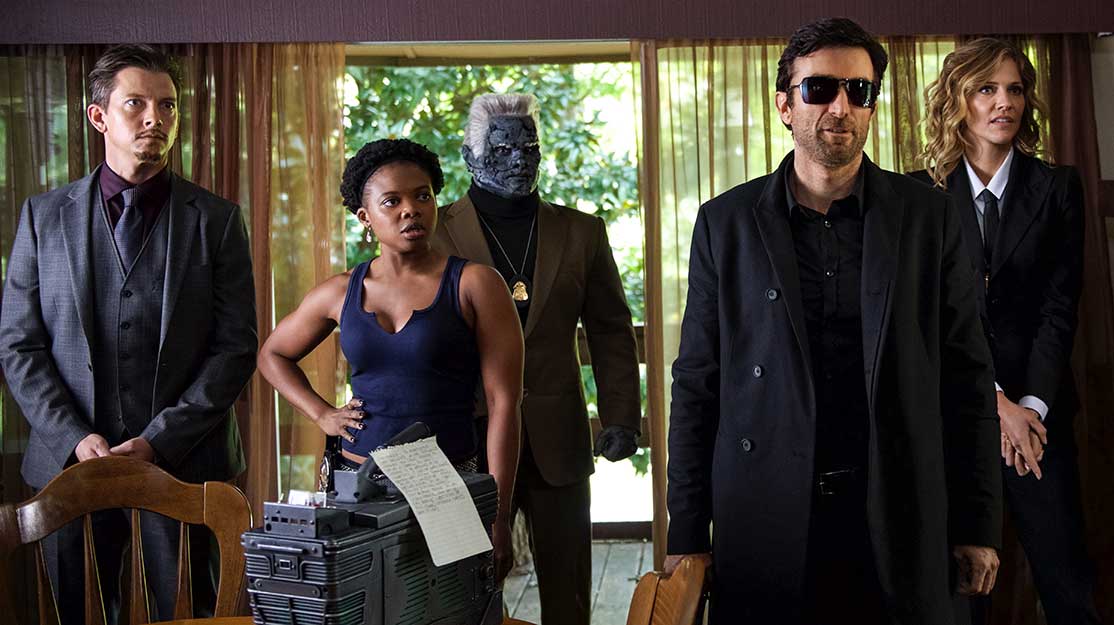 Rogue superheroes are back on the run in the second season of PlayStation Networks original series Powers. DQ speaks to showrunner Rémi Aubuchon.

If you thought the world of superheroes was confined to US network The CW – with Arrow, The Flash, Supergirl and DC’s Legends of Tomorrow among its roster of costumed crusaders – you’d be mistaken.

PlayStation Network broke into original series for the first time with the launch of Powers in March 2015 and the drama, based on the graphic novel series of the same name, returns today for its second season.

The action-packed show follows two homicide detectives, played by Sharlto Copley and Susan Heyward, who are assigned to investigate cases involving people with extraordinary abilities in a world where superheroes aren’t actually heroic.

The new season promises to delve into the storyline made famous by the first comic – entitled Who Killed Retro Girl? – as the Powers Division investigates the shocking murder of the world-famous superhero (Michelle Forbes) and the mysteries that her death uncovers.

“More than season one, we are leaning a little more heavily on the book itself,” explains showrunner Rémi Aubuchon. “When we had our initial discussions about season two, Brian Michael Bendis (creator) and I felt we skipped over a lot of cool things in the book that we didn’t pay attention to because we thought we couldn’t actually recreate them.

“We didn’t know we could realise them in a dramatic way that would be satisfying for television. But with a lot of discussion we figured out how we could do that and in fact we committed to some of the really wonderful things that were in the book that we hadn’t yet explored.”

Aubuchon, whose credits include 24, Wildfire and Falling Skies, describes the original Powers comics as a reaction to traditional comic-book superheroes – one that explores what it means to be a superhero and how they would influence our world.

“I find it fascinating that genre television has become as popular as it has,” he says. “Part of that is just that as the audience gets older, this is what they grew up with and this is what they’re familiar with. But I think also in the crazy-ass world that we live in, the fantasy of a superhero who could take care of us is appealing.

“We can say it’s really good that The Flash is there, but what if he was having a bad day and didn’t feel like rescuing people? Or if he suddenly got caught up in the celebrity machine and was much less interested in saving the world than he was in seeing how many endorsements he could get? I loved every second of that part of telling the story of Powers and using it as a metaphor not just for celebrity but for trying to figure out your place in the world and what you are willing to do to get ahead. If you have extraordinary powers or talent, how far are you willing to exploit that for personal gain? I think those are really good, fun things.”

The first season of Powers, which is produced by Jinxworld and Circle of Confusion in association with Sony Pictures Television, can now be seen around the world on traditional television channels – but its first home is one of an increasing number of non-traditional platforms moving into original series. This makes PlayStation Network stand out, Aubuchon argues, because it is willing to take risks with storytelling.

He adds: “There’s certain traditional building blocks to telling a story that I think you have to follow but I really love it when an audience reacts to something by saying, ‘I didn’t expect that!’ and I think the PlayStation platform gives us that opportunity.”

Aubuchon is also mindful of the network’s key audience – gamers – and admits the platform has influenced the structure and pace of the show.

“We have to constantly make sure the episode is moving as fast as it can because we’re very aware that our unique core audience is used to having a lot of information put before them in a fairly rapid format, and we need to keep up with that,” he explains. “I personally believe that’s the trend we’re heading towards in terms of television and the medium, which I think is changing rapidly.

“There’s still an audience out there that’s interested in the traditional network presentation of material but I don’t think that audience is going to be the majority in a very short period of time. We’ve got a very new, young, engaged audience that is demanding more than just your 42 minutes of people walking around talking about things.”

In terms of visual style, however, the showrunner says both he and PlayStation were determined that Powers should not look like a video game or appear to viewers as if they were in the middle of a role-playing game: “We wanted to have a traditional story told in that respect, but in the way we approach the cinematography, we have a very active moving camera; we move in and out of shadows. We are influenced by gaming in that just when you think we’re turning right, we make a sharp left turn somewhere. And I think that is where the big influence comes in in terms of the medium and the platform.”

Aubuchon started out in theatre before building his television career with writing credits on shows including 413 Hope Street, From the Earth to the Moon and Chicago Hope. He later produced The Lyon’s Den, Summerland and Persons Unknown.

“I don’t think theatre and TV are very different, only that nobody watches theatre anymore,” he says starkly. “I am and always have been about character. I feel that I’m of the school that believes character is structure and structure is character and you can’t separate the two.

“Not everyone, especially in television, feels that way but I feel very strongly about that and that is influenced by my work in theatre where you only have the actors on stage to tell the story, and they have to, by sheer talent and words, be able to convey the power of the dramatic story.”

It was, therefore, in character drama that Aubuchon first began writing for television – but the self-described “nerd” admits he “tried very hard” to move into genre series.

“The first attempt I made was the pilot for Caprica (a prequel to the hit sci-fi series Battlestar Galactica), where I wanted to have a sweeping saga of families caught up in this world,” he recalls. “If I could have made a living in theatre, I think I would have stayed in theatre forever and ever because there’s something about just the smell of the theatre that gets me excited. But unfortunately the lure of television called, and this is where I am.”

Now working on a genre show with the scale and ambition of Powers, every day poses a new challenge, but Aubuchon says that is part of the reward.

“What I think we did really right this season was to take the DNA from the Power book and really bring it to the screen,” he explains. “We tried hard to do that in the first season but, like in any first season of television, there’s lots of trial and error and we weren’t always as successful as we wanted to be. But this season we were very successful trying to translate a comic-book page to a real 24-frames-per-second dramatic piece. It’s not as easy as it seems and I feel very proud of that. We actually brought the comic book to the television screen.”

The showrunner and his producing partners – Bendis, Michael Oeming and David Engel – are already looking towards a third season, and with 12 books from which to adapt material, Powers could be around for the next decade.

But beyond the series, Aubuchon believes consoles like the PlayStation will become one-stop entertainment shops for users to access a host of platforms in the future.

“The idea of having a traditional network that presents the stuff to you they want to look at is, if not dead, then slowly dying,” he says. “Audiences, because the technology is available to do this, are putting together their own personal networks of what they want to see. There are so many choices of television shows out there right now and they’re over a broad range of networks and content providers.

“Places like PlayStation Networks are trying to develop a platform where people will come for any type of entertainment, whether it’s gaming, Spotify, Powers, Netflix, Amazon or any other content – and that to me is a really good model and that’s where we’re heading. I’m glad to be at the cutting edge.”