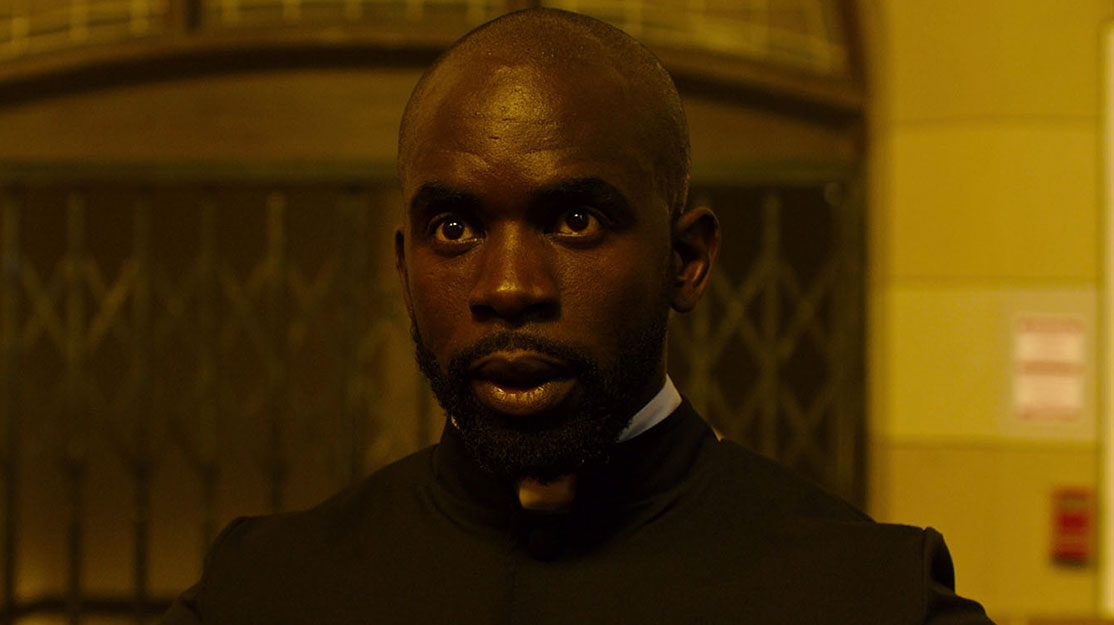 At the top of his Game

After two years of planning and a reported US$2bn budget just to get off the ground, US shortform streaming app Quibi (a portmanteau of ‘quick bites’) launched earlier this month, attracting 1.7 million downloads in its first week. Designed for mobile users and currently only available on smartphones and tablets, the service is aimed at people on the go, offering drama, comedy and unscripted programming that can be enjoyed in bitesize chunks.

It’s likely that many of those early viewers taking advantage of the 90-day free trial have tuned into Most Dangerous Game, Quibi’s flagship drama that takes its cue from Richard Connell’s influential 1924 short story of the same name, which has led to countless previous adaptations.

In this version, Liam Hemsworth plays Dodge, a man in debt and recently diagnosed with a terminal illness. He turns to Christoph Waltz’s mysterious Miles, who offers him millions of dollars if he agrees to be hunted for sport. So begins a cat-and-mouse game as Dodge must survive for 24 hours to win the game, while avoiding the numerous hunters hot on his tail.

Written by Nick Santora and directed by Phil Abraham, the early episodes setting up the game quickly give way to a frenetic action thriller as Dodge must face up to a stream of anonymous assassins, among them a man named Carter, played by British actor Jimmy Akingbola.

Akingbola, known to audiences for turns in US superhero drama Arrow and Idris Elba comedy In the Long Run, admits he didn’t know much about Quibi when he was preparing to audition for the role.

“I remember reading the script and I thought it was a film,” he says. “I was reading it quite quickly and it was quite exciting. It was a page-turner. But I didn’t know who was attached or anything then. I was waiting in my agent’s office when I saw The Hollywood Reporter and I picked it up, flicked the page and there was a big article about Quibi and [co-founder] Jeffrey Katzenberg, and the fact Steven Spielberg is on board [with horror series After Dark]. It just listed all these amazing A-list stars and talent, and I realised this is huge.”

Filming took place in Toronto, which doubles for Detroit in the series, which comes from Black Jack Films, Mayhew Pictures, Silver Reel and CBS Television Studios. Akingbola’s first task on set was also his biggest, filming a key scene in which Carter comes face to face with Dodge for the first time, hiding his true identity and his African accent by pretending to be an African-American reverend.

“I met Liam and he was very pleasant and lovely. Then I was like, ‘I have to do pages of dialogue now.’ There was no little scene to warm you up,” he says. “My character’s in a church and, when you meet Carter, he’s an African-American reverend. He’s just trying to help Dodge. I arrived on set as an American, so not many people knew I was British. Then, during the rehearsal, when I turned from American to African, you could hear a pin drop.

“Me and Liam were vibing, it was just electrifying. We didn’t do many takes of the scenes. Liam was prepared to go wherever I went with it and the excitement once they called cut with the crew and the director was great. You want that as an actor. So it was a lot to do for your first scene, but it set the benchmark for me. I was settled, and then me and Liam could go at it.”

As viewers discover through the first dozen episodes of Most Dangerous Game, Carter is very different from the other hunters Dodge encounters. Rather than intent on chasing him down, Carter is all about the psychology of the hunt, Akingbola explains, playing with Dodge like a predator with his prey – until the pair later become caught up in a motorbike chase.

“He wants to understand who he’s hunting. He’s really studied Dodge and was able to work out how he would act in this situation,” he says. “He’s West African, he’s highly educated; he studied at the top universities around the world and psychology is his thing. He knows how to push Dodge’s buttons. So while the other hunters are a bit less talky and are just like, ‘Come here, I want to kill you,’ with Carter, he’s very smart and manipulative. For me, what’s great is you don’t see Carter coming. Some of the others reveal themselves in a more obvious way. What I will say is Carter does surprise a lot of people.”

Now, having worked on Most Dangerous Game and seen the production behind a Quibi series up close – with additional camera equipment that allows viewers to watch from a different perspective depending on whether they are using their device in landscape or portrait mode – Akingbola believes the streamer has the potential to compete with established players like Netflix and Amazon and new entrants such as Disney+ and Apple TV+.

“Right now, we are all sitting at home so it’s a bit hard,” the actor says of Quibi’s ‘on the go’ appeal at a time when most of the world is stuck in lockdown due to the coronavirus pandemic. “But for those people travelling on the train and the bus who get frustrated watching something that doesn’t finish by the time they get to work, Quibi gives you that satisfaction. There is something nice about just being able to watch a couple of episodes. It’s not like watching 10 minutes of [hour-long HBO drama hit] Succession, when you’re just gonna get frustrated.”

It’s noticeable, however, that while Most Dangerous Game is an out-and-out thriller, it comes at a time in Akingbola’s career when he’s just appeared in a string of comedies, most notably ITV’s Kate & Koji and Sky’s In the Long Run, created by Luther star Elba. His previous credits include Cheat, Living the Dream, Arrow and Fungus the Bogeyman.

“In terms of TV, I hadn’t done much comedy apart from Rev [2010-14] but, in the last couple of years, I feel like comedy has been the main thing. But I don’t like to get stuck in one genre,” he says. “I feel blessed I can do both and they require different things and stretch you in different ways. Most Dangerous Game is something that stretches me physically, but this is a whole new platform. It’s not competition for Netflix, it’s offering something different.

“To get a part like Carter and to get to work with people like Liam and Christoph is a dream come true. At the same time, I like to show different sides of what I can do. It’s ticking all the aspects because it’s a great character – one of my favourites I’ve played – and it’s really exciting to be part of a new platform. I’m excited to do more shows like Most Dangerous Game.”

Besides acting, Akingbola is also busy bringing through a new generation of talent via UK body Triforce Creative Network, which he co-founded as a way to increase diversity, inclusion and access to the television industry. He says that while the US is still ahead of the UK in terms of the number of opportunities available for BAME cast and crew, Triforce has helped many producers, writers, runners and camera operators find their feet in the business over the past 12 months.

“That work is ongoing but I do think it’s an exciting time and people are waking up to it,” Akingbola says. “I’m very interested in learning about the producer space and people like OT Fagbenle with Maxxx, Phoebe Waller-Bridge in Fleabag and Michaela Coel [Chewing Gum]. We can talk about inclusive diversity all day long, but now is the time to stop the talk and get on with it. Make the shows. There are stories out there.

“I’m hoping the commissioners will slowly start understanding they’ve got a lot of responsibility to widen their menu of the type of shows they commission, because there are millions of stories out there and we’ve not touched the sides in terms of diverse, inclusive content for everybody to watch and enjoy.”

With Most Dangerous Game and Kate & Koji now on screens, this year Akingbola will also appear in Apple TV+ series Ted Lasso opposite Jason Sudeikis (Horrible Bosses), while 1980s-set In the Long Run, which is based on Elba’s childhood in London, will return for a second season.

The actor concludes: “During the coronavirus lockdown, people are going to be seeing a lot of my face!”