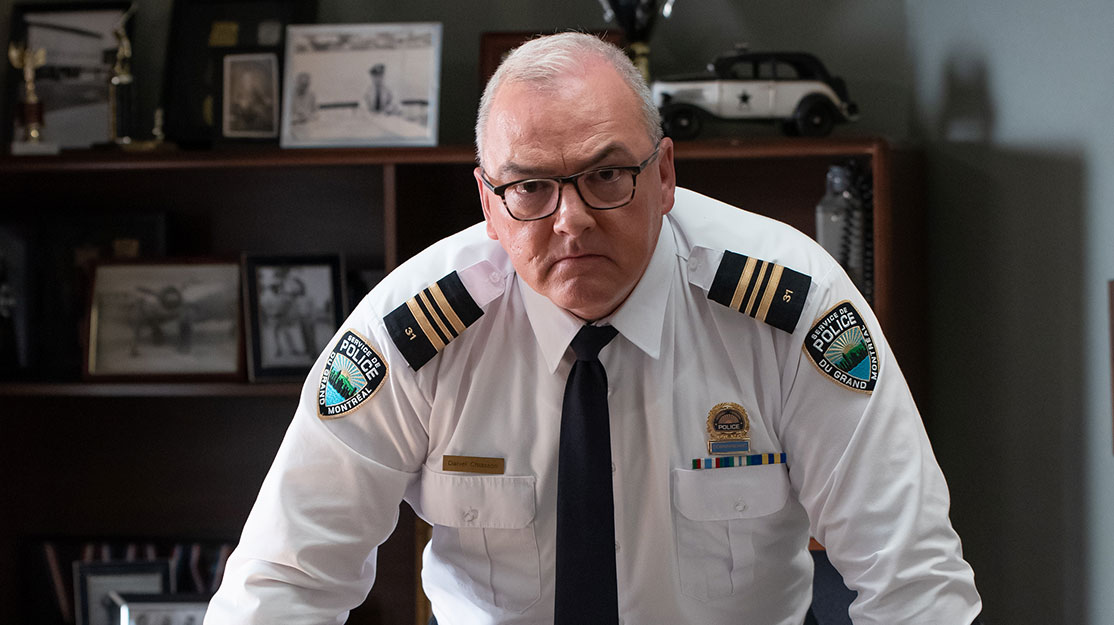 As Luc would have it

Screenwriter Luc Dionne reflects on the success of his Quebecois crime drama District 31, discusses how he has navigated a film and television career over more than 25 years and offers some words of advice to new writers.

After the conclusion of the fifth season of Quebecois crime drama District 31, creator Luc Dionne is certainly due a break. As the only writer on the daily series, he is solely responsible for producing 160 pages of scripts each week to meet the demand of making 120 episodes per year.

The Radio-Canada series, which debuted in 2017, follows the officers working at a Montreal police station as they are called upon to investigate kidnappings, burglaries, murders and sex crimes carried out in the city.

When plotting the show, Dionne says it is impossible to plan an entire season before writing it. Instead, he places himself among the characters that populate the series and follows them as they attempt to enforce law and order.

“I don’t know what I’m going to write the next week or the week after. I don’t have any plan,” he says, speaking during a session as part of C21Media’s Content Quebec On Demand. “I’ve got an overall outline, where this year I’m going to talk about domestic violence, for example. But as far as the story goes, I cannot plan 120 episodes because it’s a balance between what the actors give me and what I can write.”

The impact of the Covid-19 pandemic added some extra challenges to storylining the show’s most recent season, with actors having to abide by social-distancing protocols on set. “But as far as the stories are concerned, I just go with the flow,” Dionne says.

Dionne believes it is his extreme focus on dramatising the real work of police officers that has made the series so successful, with murder cases often remaining unsolved after three years.

“They know who did it, they just can’t prove it – and that’s the reality,” he explains. “When I started this show, I wanted to show to regular people how your life can change in a heartbeat because you make a bad decision – having a third glass of wine, taking your car, hitting a child, boom, you’re a criminal. That was the essence of the show at the beginning. That’s why people related to that show, because they could see themselves.

“Most of the people who go into a police station, they’re not criminals. They’re either a victim of a criminal act or they did a criminal act not knowing they were doing something criminal. When you can portray normal people in these situations, people can relate to what the characters are living.”

The writer also reckons his own lack of planning contribute’s to the show’s appeal. “I don’t have a recipe. The audience is still attracted to this show because they don’t know where I’m going – because I don’t,” he says. “Viewers are pretty intelligent, smart people because they’ve seen a lot of stuff. When you already know the ending, people know where you’re going unless you want to trick them all the time. I start District 31 with something and I don’t know [where it will end], so how would you know if I don’t?”

The themes and issues of the real world also infect that of District 31, with Dionne using the show to discuss topics such as social media and racism. The latter is particularly pertinent at present owing to the Black Lives Matters movement that spread around in the wake of George Floyd’s death last year.

“This is a micro society and it would be foolish to avoid these debates. They happen in real life,” the writer says. “Sometimes, somebody will tell me a story that happened in Australia and I will say, ‘OK, I’ll do something,’ because it’s important.”

The demands of writing District 31 – “4,800 pages of screenplay every year” – mean the job is quite unlike anything Dionne has done before. There is also little time for rewrites and revision. “There’s no second draft. I write, they shoot it, boom, it’s on TV. To be able to obtain this quality, it’s usually begins with the screenplays, but it’s also the quality of the actors and the technical team and everybody involved in the project to make it what it is now,” Dionne says. “It’s a unique experience. I’ve learnt so much as a writer writing this show.”

Dionne’s work on District 31 is the culmination of a 28-year career across television and film, and it seems that he was always destined for the job. A career guidance test he took as a 16-year-old suggested he might be most suited to work in literature or as a writer, “but I started laughing,” he recalls. “I said to my father, ‘There’s no way. I can’t even write a postcard.’”

Instead, he started working in music before becoming a political advisor. One day, however, he sat down and started writing a screenplay about the mob, which would go on to become Omerta, a series that would run for three seasons.

“I hadn’t written anything before,” Dionne says. “I just wrote the first episode, second episode, the last episode and an outline of the series and went to see a producer. I wore a tie! They looked at it, read it and told me that I shouldn’t ask any questions about what I’m going to do with my life because I’m going to be a writer.”

Political dramedy Bunker and biker series The Last Chapter followed, with Dionne displaying an uncanny knack of writing shows about subjects that would soon afterwards become the focus of international hit series. For Omerta and The Last Chapter, see The Sopranos and Sons of Anarchy, respectively.

“I can’t explain it. There’s no secret; it’s all about work,” he says. “I’m never happy about what I’m doing. I’m always criticising this and that, but that’s part of being a writer.”

Those early series also have something in common with District 31 – Dionne’s interest in the minute details of the worlds he is writing about “There are a lot of shows about cops, and we’ve seen a million of them about mobs and bikers. But I’m always interested in the small details because we never get them with these shows,” he says.

“That’s probably why District 31 works so well. I go as deep into how complicated it is to write a warrant. I can tell you a story spread over 30 weeks about a warrant being defective, where it’s not applicable or you can’t use whatever you got from it in a court case. I’m interested in that kind of thing, and that’s why people relate so much to this show. It’s all about those little details we don’t usually know, that people don’t tell you because they think it’s too complicated.”

After writing the second season of The Last Chapter, Dionne then had a spell in cinema, writing and directing films such as Omerta (a feature film sequel to the series), The Child Prodigy and Aurore. But although he is a self-avowed film fan, his work soon led him back to television with 2016 drama Blue Moon.

“It’s pretty tough to do movies in Quebec,” he admits. “It’s a very long process. There’s no money and there are a lot of filmmakers. It’s also a personal matter to me. A film is something that disappears very fast unless you’re writing the movie of the year. Most of the movies, it’s something that it takes a long time to do and, after a month, it’s gone.

“Writing a good movie is probably the most difficult task for a writer in life. It’s hard. Anybody can write a movie, that’s easy. But writing a good movie is unbelievably hard because you’ve got two hours to tell the story, so it better be good. I’ve got 120 30-minute segments to tell the story [in District 31] so I can go anywhere I want. That’s probably why I came back to television. The format is bigger. It’s longer. You can go into character stuff you can’t do in movies.”

Dionne says the key to being a successful writer is to listen to your gut instinct. As an example, he reveals that he wrote 17 versions of Blue Moon – about a woman who inherits her father’s company only to find it being used as a cover for illegal activities – but something didn’t feel right about the script and he put it to one side. A week later, he came back to it, and version 18 became the first episode of a series that would run for three years.

“If I had more advice to give to young writers, it’s forget about the story. It’s all about the characters. I don’t remember what Steve McGarrett did in Hawaii Five-0. There were so many stories, but I remember the character. It’s as simple as that.”

The writer says you should also be able to boil down the essence of your story into a 20-word sentence. If you can’t, “you don’t have a story,” he adds. “You’re just babbling about something. Omerta is the story of a cop who falls in love with the daughter of a mobster. If you can’t do that, you don’t have a story. The real stories are in the simple things. It doesn’t have to be complicated. I know because when I write complicated stuff, it’s complicated for me too. That little voice tells me.”

Dionne is already looking ahead to June 1, the date when he will be back at his computer ready to begin work on the sixth season of District 31. But if he doesn’t know what’s in store for each season before he begins writing, how will he know when the show should end?

“I’ll feel it,” he says. “If I don’t have fun doing this show, I’ll stop doing it. A friend of mine used to play in the National Hockey League and I asked him, ‘When did you know it was time for you to retire?’ He said it happened one morning: he went for breakfast, he turned to his wife and said, ‘That’s enough. I don’t want to play hockey anymore. I’m finished. I don’t want to do that again.’ And it’s probably going to be the same thing for me.

“I’m going to be writing something and I’m going to turn around and say, ‘You know what, that’s enough. I’ve had enough of cops. I’ll do something else.’”