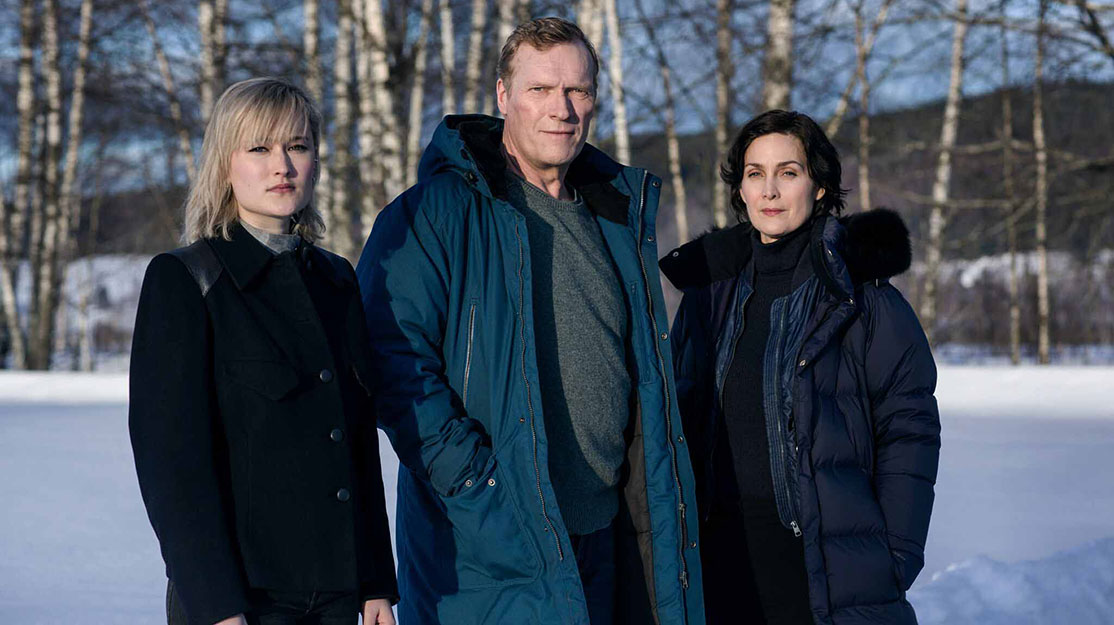 Crime continues to be the dominant force in television drama. DQ speaks to a selection of leading writers and producers about the genre and finds out how their latest series are pushing the boundaries of traditional police stories.

Crime dramas continue to dominate the television landscape, whether viewers watch weekly episodes or binge the latest serialised boxset. Yet the genre has shifted a long way from the traditional crime procedurals best characterised by long-running US series like Law & Order and its many spin-offs.

“We’re constantly trying to reinvent it and find new ways to tell the same story,” says Steve Thompson, the showrunner of Vienna Blood. “Broadcasters are always asking for a new way to make a cop show, and going to Vienna in 1906 is a really new and fresh way to do it.”

Set before the dawn of forensic science, Vienna Blood is based on the novels by Frank Tallis. It sees Max Liebermann (Matthew Beard), a brilliant protégé of psychoanalyst Sigmund Freud, come into contact with Oskar Rheinhardt (Juergen Maurer), a detective struggling with an unusual and disturbing murder.

Endor Productions and MR Film are collaborating on three 90-minute films based on three of Tallis’s novels. They were commissioned by ORF in Austria and ZDF in Germany, with Red Arrow Studios International distributing.

“It has the same essential ingredients [of a crime drama] in that is has a great plot and great characters, which is really important, but this has a particular sheen that Vienna in 1906 gives it,” Thompson says. “It’s just a place you want to be. While some parts of it are very dark and terrifying, others are exhilarating to experience.”

More often than not, crime dramas are characterised by the person leading the investigation. In Vienna Blood, Liebermann is forging a new path in the use of psychology to solve crimes. In the case of Chilean drama Inspector Rojas: In Cold Blood, the titular investigator must come to terms with his complex past as he fights for justice and seeks inner peace through his police work.

The series, a Villano production for Mega, is based on real events from the 1990s and dramatises the disappearance of 12 young girls in the Alto Hospicio commune in northern Chile, triggering an investigation led by police captain César Rojas. It is distributed by DCD Rights.

Director and producer Juan Ignacio Sabatini says: “Rojas puts up a wall around himself to contain his inner demons but the wall begins to crumble just before he embarks on this journey. His need to find justice and to fight for justice is intrinsically linked with trying to solve his own issues. This inner strength is what makes him stand far above his colleagues.”

Sabatini believes “humans have always had a morbid interest in evil” – an interest that dramatically increases when a story is based on true events. But key to any successful crime series is the way the story is constructed to offer clues along the way. “Being able to give the audience a structured, yet broken, stream of information is crucial, as it means they are able to conjecture different scenarios as the case unfolds,” Sabatini adds.

Three investigators take centre stage in fellow Chilean series La Jauría (The Pack), but this eight-parter isn’t just a detective drama. Coproduced by Fabula and distributor Fremantle, in association with Kapow and public broadcaster TVN, it sees a specialist all-female police unit led by Elisa Murillo (Daniela Vega) tasked with solving the disappearance of a 17-year-old teenager involved in protests against a teacher suspected of sexually assaulting a student. A video of the missing girl being raped by a gang of men then goes viral, and the detectives soon learn there is more than one person behind the crime.

“These three policewomen are flesh and blood women trying to deal with their personal lives, as well as with the crimes they investigate,” showrunner Lucia Puenzo says. “What interested me the most is these women are faced with very sinister and very dark worlds, at the same time as, in their personal lives, they are faced with the universe of child tenderness, parenting, being in a couple, or solitude in the case of Daniela’s character.”

Those familiar with the 2006 German psychological crime thriller Perfume: The Story of a Murderer might remember the story of a killer with a unique sense of smell. That feature film has now been followed by a series, called Parfum (Perfume), commissioned by broadcaster ZDF in collaboration with Netflix, which carries the series outside Germany.

The story, based on the movie and the original novel by Patrick Süskind, follows a criminal profiler who begins to investigate the past lives of five school friends when they become linked to a murder. In a meta twist, it transpires they read Süskind’s novel at boarding school together and it inspires them to experiment with smells. The profiler then reads the book and watches the film to learn about the possible motives behind the crime.

“Perfume is unlike other crime series in that it combines a thrilling modern crime story, deep psychodrama and a seemingly esoteric topic such as the mystical power of smell,” says Oliver Berben, from producer Constantin Film. “It is also unusually original in terms of its visual and narrative style: beautiful but bleak, psychological but also extravagant, fantastical and hyper-realistic at the same time. We tried to create something without using existing patterns or paragons, with its very own look and feel.” 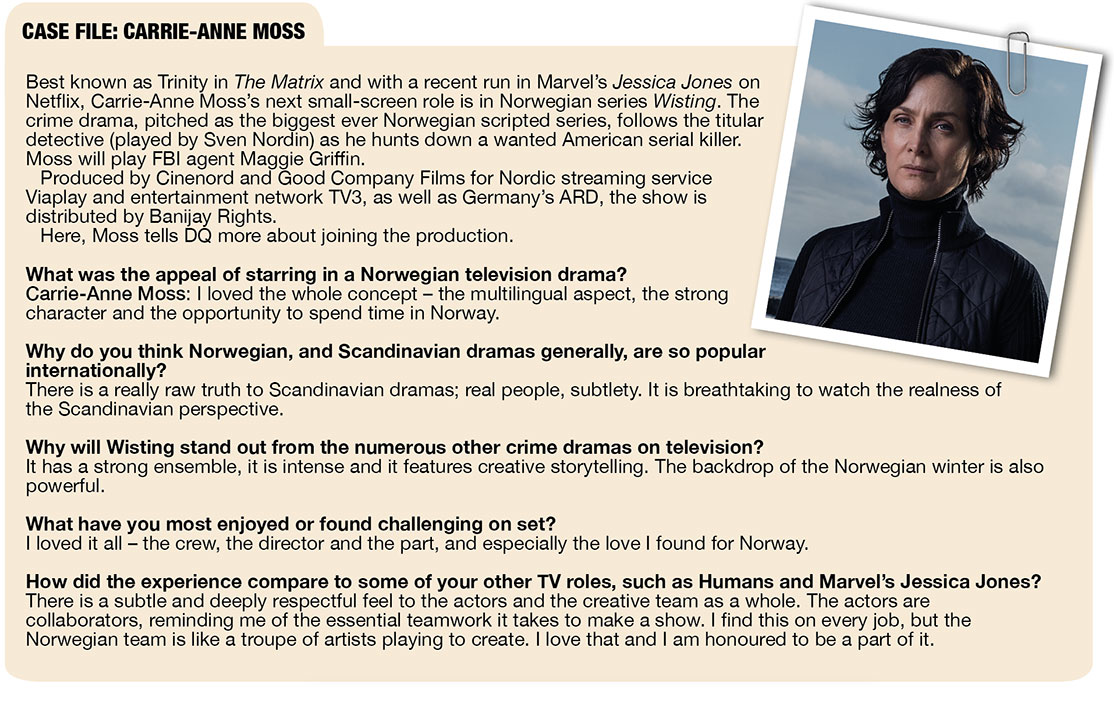 Dutch drama The Twelve offers a fresh perspective within the crime genre, putting viewers alongside the jury members who must determine the fate of a woman accused of a double murder.

Produced by Eyeworks for Eén and distributed by Federation Entertainment, the Flemish-language series introduces the members of the jury, alongside the accused and the victims’ families, exploring the case through the evidence presented during the trial and how the jurors’ personal lives affect, and become affected by, the proceedings.

“What really struck us – and became the main idea of the series – was when a woman told us she had a really dominant, jealous husband and then when she was on a jury, she started to see traits of her husband in the defendant. She was thinking that if she stayed with her husband, she might find herself in the same position [the victim of a crime perpetrated by her husband],” says Bert Van Dael, who wrote the series with Sanne Nuyens. “It was interesting for us to see how your private life may affect your judgement.”

Series producer Peter Bouckaert says that while most crime series follow trained professionals doing their job, this 10-parter sees people picked at random to decide another person’s fate. “When you’re watching a really good crime story through the eyes of the professionals, you are doing a bit of police work yourself,” he explains. “In this case, it’s truly a one-on-one experience with our main characters. People watching the series are put into the same position as them, and we think that’s unique.”

Spanish drama Hierro mixes crime and politics when a body is discovered in the sea, off the coast of a secluded island in the Canaries. The story focuses on a judge, who has recently arrived on the island, and a local businessman suspected of the crime. It is produced by Protocabo and Atlantique Productions for Movistar+ and Arte France. Banijay Rights is the distributor.

“We conceived the series as ‘southern noir,’ set in a place of luminous landscapes and passionate characters, full of humour and intensity, reflecting the reality of Spanish life,” explains executive producer Alfonso Blanco. “Crime drama is in constant evolution. It has changed over the past few years, in the same way as other genres, but what may be different now is its accessibility. Nowadays, an audience can watch the same series at practically the same time all over the world.”

For this reason, crime stories must also have universal topics and themes, whatever their setting or their approach to the genre. “The mechanics of a crime thriller can be followed in almost any country,” Blanco continues. “Add to this the fact that the duration of a miniseries allows for greater evolution of characters, helping to create a frame in which to develop different stories and characters. The genre also permits a sociological approach to different realities; therefore, the variety of stories is infinite.”

Supposedly old-fashioned crime procedurals haven’t completely disappeared, however. Broadcasters around the world, particularly in Europe, are still keen on closed-ended, episodic series that viewers can enjoy without the commitment demanded by a serialised drama.

“Generally these days, the detective is dead, reincarnated or wearing an interesting hat. Everything has to be really quirky – and lots of those shows I love. But there isn’t a show like this,” Paul Marquess says of his Acorn TV series London Kills. “It does what it says on the tin.”

The series, distributed by ZDF Enterprises, follows a team of top detectives solving murders in London and represents a throwback to the episodic storytelling model that has been overshadowed by the current trend for bingeable series, with one story told over multiple episodes.

“It’s not wildly quirky. All the detectives are actually alive. There is, I hope, a very compelling serial story kicking along underneath it but what that really does is inform the relationship between the characters in an interesting way. That’s what it’s there for. Ultimately, I hope it reflects my fascination with the real versions of what these people do – and we all love a good murder mystery. It doesn’t have to be dressed up in Agatha Christie clothes. There isn’t, to my mind, an equivalent UK ‘murder of the week’ being shot at the moment.”

Meanwhile, Canadian series The Murders presents a unique concept for a procedural crime drama by using music and sound related to the theme of each episode. For example, episode one uses Long Black Veil – a ‘murder ballad’ originally written in 1959 and covered by artists such as Johnny Cash and Mick Jagger – as a key hook for the story.

It’s part of a five-season plan to explore a different sense each year that showrunner Damon Vignale has designed for the series, which stars Jessica Lucas (Gotham) as a rookie homicide detective who searches for redemption after her negligence led to the death of a fellow officer. It is produced by Muse Entertainment for CityTV and distributed by About Premium Content.

“Music colours the world of the show and hopefully makes it a little different and stand out,” Vignale says. “But in terms of crime drama, people want a compelling story. They’re going to come back week after week for your characters but they have to be playing in this world.”

Vignale starts with the plot and then looks to see how its themes can be related to the characters. “Those things are at the forefront for me. Then, of course, you want really great twists and misdirects, you want to surprise people,” he continues. “I try to push a show as much as I can.”

There is no doubt crime drama remains the number one attraction for television viewers, but the fragmentation of the industry and the number of networks and streaming platforms commissioning original drama mean there are increasing opportunities to tell stories with a diverse range of topics, settings, characters and styles – none more so than in the crime genre.

“But what’s important is that the result is authentic and captures the audience it is aimed at,” Perfume’s Berben concludes. “Taking risks is not just an opportunity but, to a certain degree, a necessity.”