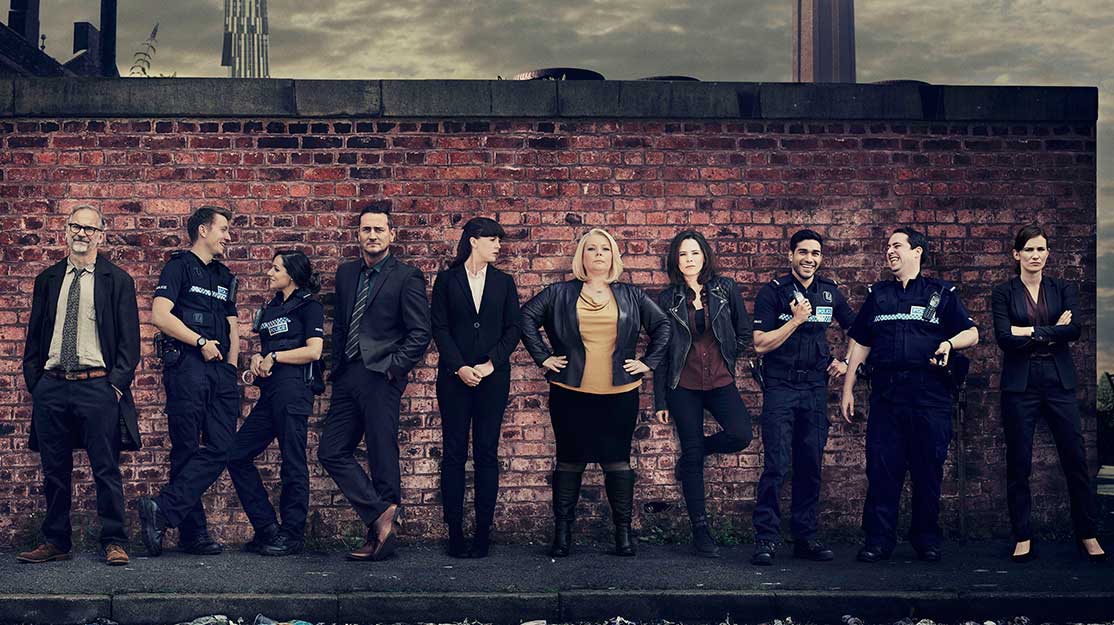 As Channel 4’s genre-defying cop show No Offence returns for its second season, DQ hears from the cast and creator about the strength of its female characters and striking the show’s unique tone.

It’s hard to imagine there are many laughs to be found in a show centring on the hunt for a deranged killer who targets young girls with Down’s syndrome.

Yet somehow the team behind No Offence managed to pepper the first season of the Channel 4 series with comedy moments. That they did so without detracting from or trivialising the hard-hitting subject matter, or creating an awkwardly mishmash tone, was all the more impressive.

The police procedural comedy drama, whose debut outing was a major ratings hit for C4 in 2015, returns to UK screens tonight, with DI Deering (Joanna Scanlan) and her team of detectives back to tackle criminals on the streets of Manchester.

This time around, a pair of warring crime families take centre stage, with the first episode beginning with a bang – quite literally, thanks to a huge explosion in the opening minutes.

Creator and writer Paul Abbott, perhaps best known as the man behind the original UK version of Shameless, which also ran on C4 and has since spawned a hit US version, admits getting No Offence’s unique tone right is a continuous challenge.

“It’s a very tight bandwidth to try to pin down, but when we did, we fired. It was great,” says Abbott, who assembled a writers’ room for the show. “You’ve no idea until you hit it – and it’s very hard to describe what that moment is.”

With No Offence’s first run tackling topics including honour killings, racism and drugs, one could forgive executives at C4 for feeling a bit shaky about some of its storylines – especially when comedy is being added to such a hefty mix. But Abbott praises the channel’s flexibility.

“We’ve had to calibrate certain storylines where Channel 4 didn’t like the way we’d approached the story, and that wasn’t rude to say – it was a very sensitive story,” he explains.

This season, controversial subjects include female genital mutilation, and Abbott says no topic was off-limits. “You have to negotiate your way through. We went round it all and we basically found a very grown-up, intelligent way through it. We didn’t have to back down on anything.”

Will Mellor, who plays DC Spike Tanner, picks up: “That’s the show, though. We don’t pull punches. There are certain shops that put this box set in the comedy section!

“I was thinking, could you imagine going to the wife and saying, ‘Let’s watch something really funny tonight – season one of No Offence.’ Then one minute you’re [seeing someone] dragging a Down’s syndrome girl out of a river and the next there’s someone getting sucked off in a bush.

“Where can you put this show? There’s no genre for it. I don’t think it’s a comedy, but what is it? That’s why I think it’s genius.”

Scanlan admits to having trouble finding the right balance in her performance. “Tone is the hardest thing to nail on the show. When we were shooting, I didn’t really know what the character was until I saw what was done in the edit. I was never certain who she was, because that tone is so very particular, and it was nerve wracking,” says the actor, adding she felt much more comfortable the second time around.

“It’s got a flavour unlike anything else,” she continues. “You’re taking the story seriously and the characters’ set of coordinates really seriously, but there is also some levity in it and some lightness. It’s an odd confection.”

Scanlan’s no-nonsense, authoritative Deering is just one of several terrifically written leading female characters in No Offence – another thing that makes the show stand out.

The most notable addition to this season’s cast is Rakie Ayola as the fearsome Nora Attah, matriarch of the Attah crime family, while Elaine Cassidy (DC Dinah Kowalski) and Alexandra Roach (DS Joy Freers) both reprise their leading roles from season one.

Asked how he manages to write such compelling female parts, Abbott’s response is typically wry. “People ask me why I write women so well, but they don’t ask other writers why they’re such lazy fuckers,” he says.

“As women get older in this industry, I realised really early on as a writer that, if you write really good parts for women, you get the best available, because they all think there’s nothing left for them.

“All the females in the show, whatever axis they come from, they’re all defined as people you’d take out for a pint. The whole point is to attract the male viewers as well, and not by changing the politics of the show, just by making unmissable females.”

Scanlan believes Abbott is “just reflecting reality” in terms of the female presence in police forces. And, reinforcing the writer’s comment about parts for older women, she says: “I feel lucky in that I’m part of the generation who, in the eighties, might have thought we’d run out of road by now.

It’s not just in front of the camera where women have a strong presence in No Offence, with no fewer than three females among those who took to the directors’ chair in season two.

Meanwhile, although the cast believe No Offence is a realistic depiction of police work, what do real-life police officers – like Abbott’s son, Tom – think?

“They love it, and I love phoning Tom because he’s a writer as well. When I phone him, I don’t get the kind of research question back – he knows exactly how I’m trying to squeeze in something that really shouldn’t fit. He gives me an intelligent perspective on how we can make it fit for us. It’s very useful.”

Furthermore, Mellor’s brother-in-law acts as police advisor to the show. “He told me about the script before I was even in it!” the actor says. “He was like, ‘Ooh, it’s good, this. There’s some good stuff in here.’ I know he loved it as well. He’s in CID [Criminal Investigation Department] and he advises on all the scripts.”

But despite the help on offer from the real thing, Abbott reveals No Offence – produced by the writer’s own AbbottVision and distributed by FremantleMedia International – is one of the hardest shows he’s ever had to write.

“Every single episode had umpteen drafts beyond what I thought we would need,” he says. “You have to accurately and, with all dignity, write a procedural cop show at the same time as you’re trying to be subversive and witty and to occupy that yawning space that isn’t always there.

“You wring yourself mad in the mornings trying to climb back into a scene. But when you do, and it’s speaking for itself in its own overcoat, we can all fly.”