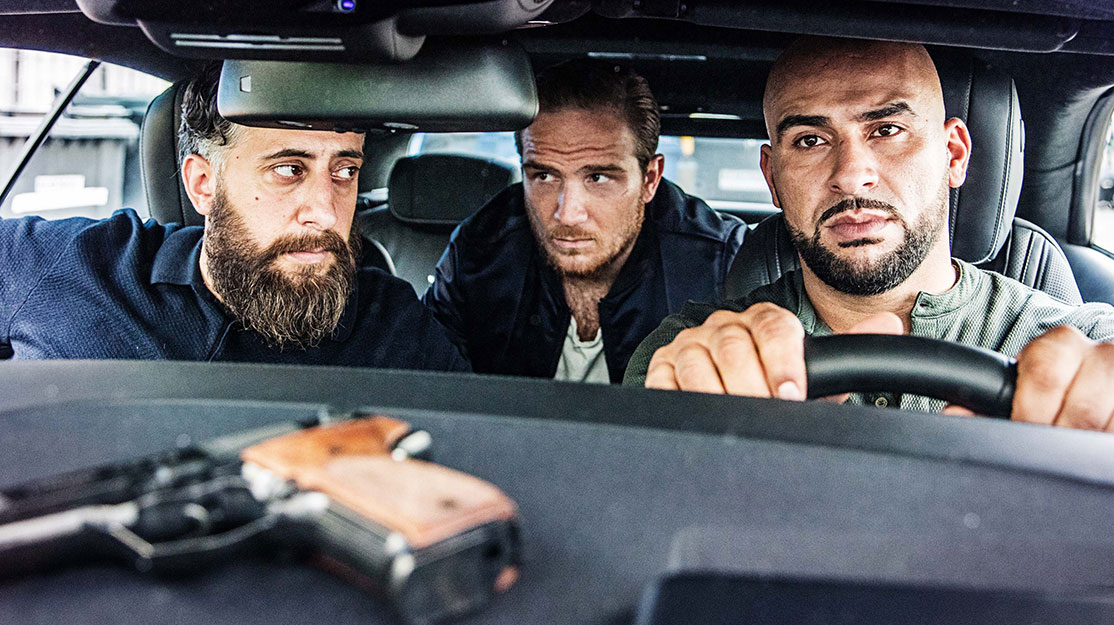 Mobsters rule a corner of Berlin in German drama 4 Blocks, which has been renewed for a second season before its debut. DQ chats to the team behind the six-part series.

When it comes to mobsters on the small screen, series such as The Sopranos and Gomorrah can claim to rule the roost. But the gangs that run New Jersey and Naples respectively could be pushed off the map by the clan at the centre of a new German drama set on the streets of Berlin.

4 Blocks, which debuts on May 8 on German pay TV network TNT Series, revolves around Ali ‘Toni’ Hamady (Kida Kodr Ramadan), who has made a promise to his wife Kalila to leave behind his life of crime.

But when his brother-in-law gets arrested in a police sting, Toni feels obliged to step up as leader of the clan once again and prevent his hot-headed brother Abbas (German rapper Veysel) from becoming head of the family.

Set across six episodes, 4 Blocks tells a story about friendship and family, betrayal and trust, all within an Arab mob living in the central Berlin district of Neukölln.

4 Blocks was originally conceived as a series told from the point of view of the police, but executives from TNT Serie owner Turner felt that premise was too straightforward and formulaic. Instead, they wanted to tell the story from the perspective of the Arab family.

The inspiration for the series came from an article Berg had read that said there were areas in Neukölln into which police officers would not venture alone.

“I really liked the set-up and the clans. I’ve lived in Berlin for a few years so I knew what was going on,” recalls Greifeneder, Turner’s director of original productions. “Then I said I’d like it to be a bit more radical and change the perspective by going into the clan and telling it from their perspective.

“It’s a parallel universe within society, and that’s what’s interesting. Quirin was really happy about it; they don’t very often hear suggestions to make it more radical – and that’s how the whole project started.”

Berg picks up: “There is some kind of news from Neukölln every week, every month, so it’s really something that is vibrant and has a certain momentum. The fact the police wouldn’t really go there was remarkable because it was far away from my perception of Germany as a safe place and a safe country.

“We always wanted to tell the story from both sides, not just the police side, but there was more of that in the original concept. We really embraced Anke’s input, saying ‘Let’s be more radical.’ That’s what it’s all about.”

Because of the realities of life in Neukölln, the production team sought a story that had a balance between reality and fiction – a process that involved speaking to lots of people who actually live and work in the district.

“We spoke to officials, policemen, attorneys, lawyers and people living there,” Berg says. “It was all about treating people with respect and not judging them. We tried to really get a survey on what’s beneath the surface. For us it was not about the typical clichés of gangster life. It was more about the question of who are the people behind it, their family and their relationships.”

That’s why 4 Blocks is not just about action and organised crime, and uses the legacy of shows such as The Sopranos and Gomorrah by exploring the dynamics and relationships within the gang and what leads them to make the decisions that they make during the course of the series.

“It has some very emotional elements to it as well,” adds Hannes Heyelmann, Turner’s senior VP and managing director, central and eastern Europe and international original programming strategy. “That’s one of the big advantages when you tell the story from the inside versus the police angle. We’ve managed to show different perspectives and we’re not just fulfilling the stereotypes. This is what people on the street realised as well. When we hired some of the cast from the area and brought in lots of extras, word spread that this was not about shaping a certain image.”

Leading the project from a creative standpoint was director Kren, whose credits include crime drama Tatort. He has also been hired to helm forthcoming crime drama Freud, about the young psychoanalyst Sigmund Freud in 1886 Vienna.

“I immediately latched on to that idea [of dramatising life inside the clan] and felt that it was really interesting,” he says. “For me as an Austrian, to try and get a foothold in this world was very difficult, and thanks to Kida, who is from a Kurd-Arab background and knows quite a few people in the area, that was a door-opener, definitely.

“We’re trying to look at family and in this case it’s a Lebanese-Kurdish family. We know they exist in Germany. It’s very authentic and we can be very confident in our approach. Then of course there is this backdrop of Neukölln. The interesting thing is if you go to France, nobody knows there is a mafia in Germany, that there are mafia-like structures and mobsters in Germany. I talked to somebody and mentioned this, and they had no idea this existed. So it’s interesting to tell a story about Germany that is not too familiar outside of Germany either.”

Berg has previously worked with Kren and describes the director as “extremely passionate” about his work, noting that he spent many days and nights in Neukölln speaking to people there. “He’s one of the best directors we have [in Germany] right now,” he says. “We developed a large part of the series with Turner and our writers. Then we brought Marvin in and he changed the game in a very good way. He spent a lot of time with people that really contributed by telling him stories and sharing their lives with him. He soaked in this authenticity and found a way to put it in our project. It’s his style, his handwriting and the whole tone of the series is what he managed to put together in a great way.”

“He also brought the writers in; they had their office there for a couple of months,” reveals Greifeneder. “You’re always better when you know what you’re writing about and that’s something you could really feel. It’s something that’s not typically German. It’s a really unique look.”

For leading actor Ramadan, 4 Blocks was something of a homecoming, as until recently he had lived in Neukölln for 37 years.

“The danger of making a contemporary series about a criminal foreigner is that you shore up stereotypes and clichés, or that you actually stoke the flames of the whole [immigration] debate,” he says of the series. “But, of course, on the other hand there are criminal clans [in real life] and we’re trying to give them a face so you can look at it in a different way and understand why the situation came about. If you touch something that’s a hot topic, it doesn’t necessarily mean you’re stoking the flames.”

The location of the series, in the south-east of Berlin, also provides a distinctive look that will be unrecognisable even to those familiar with the streets of Germany’s capital.

“Berlin is a little bit like New York – it’s shot so many times you’ve seen all these places so many times,” Greifeneder admits. “But now I’ve seen Berlin in a new way. At the beginning, you almost feel like you’re in Istanbul, but then you realise it’s Berlin. Even the typical things you know, he made it so you see it with new eyes, and that’s really difficult.”

Berg says the production used a lot of original locations, which sometimes meant going into places where the crew might not have been entirely welcome: “We made sure we were talking to the right people and that they knew we respected them,” he notes. “They loved our work as filmmakers in general so they respected us. The funny thing was, after we wrapped principal photography, a policeman came up to us and said while we were shooting the whole area was really quiet and, one day after we stopped, it all went crazy again. It’s true – it could have gone so bad and it didn’t. We didn’t have any incidents or any problems at all.”

The third original series to air on TNT Serie, after comedy Add a Friend and mystery thriller Weinberg, 4 Blocks has already been renewed for a second season. Production is due to begin later this year and the season will air in 2018.

“When we look at a concept, we try not to play it safe but take risks,” Greifeneder says of Turner’s original drama strategy in Germany. “4 Blocks is not typically German but it’s also easier for us [to commission a show like that] because we don’t have ratings pressure. We’re pay TV, so we have another business model. Saying that, we still want to reach for both. We want to have something critically acclaimed and that also has fans.”

Berg adds: “We’re not trying to please the audience, we’re trying to follow a vision we believe in. Most of the time, I find that if you have a strong creative vision you don’t try to make everybody happy and you end up having something that is stronger at the end and will attract more people. That’s one of the strengths pay TV has to offer and we’re taking full advantage of that.”