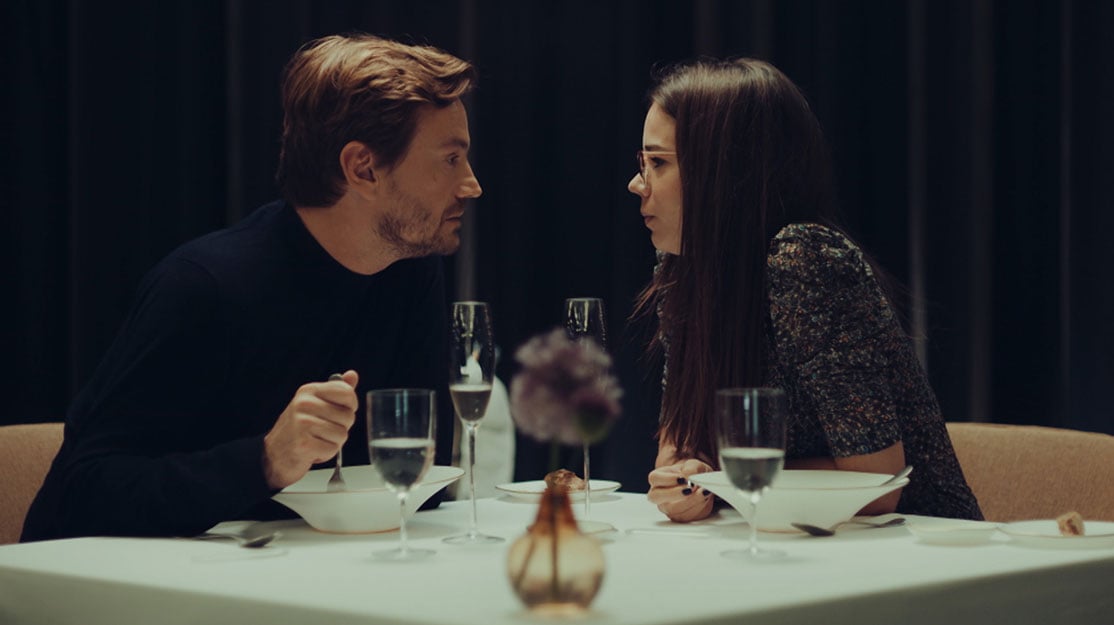 Award-winning Spanish filmmaker Isabel Coixet tells DQ about writing and directing her first television series, Foodie Love, in which two strangers who meet on a dating app embark on a gastronomic journey together.

Foodie Love, the first TV series from award-winning Spanish filmmaker Isabel Coixet, should come with a health warning: do not watch while hungry.

From the outset, the eight-part series offers a fast-paced visual style that marries the gastronomic conversations of the two main characters with cutaways of dishes they are describing, fully stocked fridges or freshly baked cakes on display in a cafe. It’s a recipe for food envy and an immediate urge to visit the nearest restaurant. “That’s the idea,” the creator jokes.

Written and directed by Coixet (My Life Without Me, The Secret Life of Words), the series fuses together two of her biggest passions – love stories and food – to tell the story of two 30-somethings who meet on a food-based dating app and begin to bond over their shared love of Japanese yuzu and distaste for foodie pretension. But will it be enough for them to get over the scars of their previous relationships and find true love together?

Through the course of the show, the two characters meet, separate and reunite on a journey through cafes, bars and restaurants, all inspired by real places Coixet has visited and the food she has tried. Episode titles include Just a Coffee, Breakfast in Kentucky, Gelato di neve and The Last Supper.

Produced in Spain for HBO Europe, Foodie Love marks Coixet’s TV debut, coming after she built a career in film that has seen her win seven Goya Awards, Spain’s equivalent of the Academy Awards in the US.

“I’d been offered [the chance to direct] lots of seasons of TV shows but I have to say, I’m not good with someone telling me, ‘This is the story, those are the characters, this is the wardrobe and those are the sets,’” she tells DQ. “It would not be fun for me, even if I like some of the shows. I would not be a good director for those. One of the joys of directing is creating the thing and choosing the actors, choosing everything.”

Foodie Love then emerged from her experiences visiting gourmet festivals in New York with friends who were using dating app Tinder. “I started absorbing these stories and ideas and tastes and flavours,” she says. “One day I sat down and I wrote it.

“The most different thing [from making a film] was the writing, because when you write a script, there is a structure. I really know how to structure a story for a feature film, but I discovered you can give more depth to these characters and more backstories [when writing for television]. By the third episode, I realised how it could work. When I had the whole story in my head, it was easy.”

Laia Costa (Cites, Bandolera) stars as a book editor who is somewhat suspicious of relationships, while Argentine actor Guillermo Pfening (Supermax, Valientes) plays her love match, a cultured, successful mathematician who is a little naive. Somewhat ambiguously, they are listed as Él (he) and Ella (she) in the credits, with Coixet slowly pulling back the curtain on their personalities as the story progresses.

“I really wanted to say men can be vulnerable and women can be tough and sometimes heartless. That’s how you see people in relationships. I wanted to say some things about couples, about the things we don’t say and all those silences where people all of a sudden run out of words and they are in themselves.”

The director’s playful visual style also helps to reveal more about the characters, with thought bubbles, cartoons, video clips and emojis appearing on screen that, together with Coixet’s characteristic use of voiceover, means viewers can see how their outward appearance and conversation often betray their inner feelings.

“I started the series in a very Zen-like state, thinking this was a real opportunity to be free, to try things and to explore things I maybe hadn’t explored before,” Coixet says. “Audiences now are so used to emojis and cutaways and gifs, so let’s use them. If you’re going to use one of those dating apps like Tinder, you’re used to these things. It’s your language and I thought, ‘Why not?’”

Coixet, whose love of food has frequently led her to travel for several hours to find little-known restaurants recommended by friends, says titles are an important part of her writing process, adding that once she had decided on the name Foodie Love, she began writing each episode about a different stage of the couple’s blossoming relationship.

“In all the titles, there is something about food,” she says. “They are not created around a special food, but for me it was a help and a guide. The first three [episodes] were very difficult but I had a revelation in the third, thinking, ‘I know how it’s going to end,’ and I cruised to that point.”

“All the places [we filmed in] are real except the Japanese restaurant,” she reveals. “There is a Japanese restaurant inside a market in Madrid, but we couldn’t go to Madrid so we reproduced that place in Barcelona. All the places we’re talking about in the series exist. They are some of my favourite places in Barcelona to go. In Rome, it’s a real restaurant, and in Tokyo, while in France it’s a real hotel.”

On set, Coixet carried the same sense of freedom that she had developing the project into production. On one occasion while filming the sixth episode, Coixet was re-reading the day’s shooting pages when she decided to spike most of the script.

“Something was missing to show how free with each other these two people are,” she says. “I cut most of the dialogue for that day and we did a scene where they just dance. I said to the actors, ‘Forget all these lines.’ The actors were like, ‘But we’ve learned all these lines!’ But it was too much. I said to them, ‘Have those lines in mind but let’s just dance.’ It was a fun day.

“Laia is a very intelligent woman and I love her dearly. She can play everything. As a director, I like to find out who this person is and how I have to talk to her. What sort of things will inspire her, what should I avoid. You find a way to talk to each of them and then you go. Sometimes I really like to talk, but I’m also at a stage in my life where I’m not afraid to say, ‘I don’t know. Let’s figure it out.’”

Mirroring the writing process, the most challenging episode to film proved to be the first, in which the couple meet for the first time and share a coffee, as Coixet worked out how to avoid the camera cutting back and forth repetitively between the characters. “I always hate the formality of it,” she admits, eventually utilising the aforementioned cutaways and some of the other figures in the café to break away from the main actors, with their voices still audible.

“I wanted something more fluid, more in the moment. That was the really difficult one, and it was the first we did. Even if we had reversed [the camera shots], you never know what’s going to happen with the actors, but both of them were open to everything. Guillermo and Laia developed an amazing friendship – it was a relief to see how close they were and how free they were with each other.”

With a plan in place for two more seasons, Coixet says she would love to create more episodes of Foodie Love. “I have stories for them both and I know how to change it a little bit to make it really unpredictable,” she says. “Let’s ask HBO and see what they think. There would be new actors and some of the same faces. It’s a very curious arc.”

Foodie Love, which is produced by Miss Wasabi Films, debuted on HBO across Europe at the end of last year and is now set to make its debut on HBO in the US next Monday. Coixet believes its dual themes of love and food mean it can be enjoyed by audiences around the world.

“Love stories will always be complicated. Real love is never simple,” she says. “I have had the opportunity to show Foodie Love in several countries, and you see people connecting with these characters – and the food, of course.”