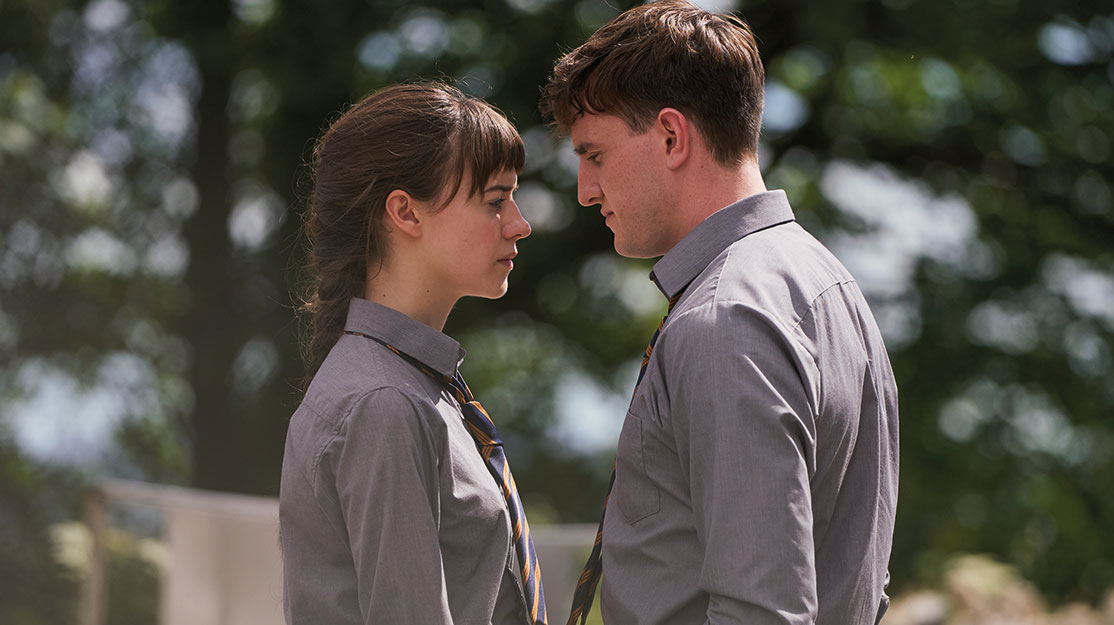 Sally Rooney and Alice Birch tell DQ about adapting the former’s critically acclaimed novel Normal People, in which a pair of teenagers embark on a tender but complicated relationship.

Sally Rooney’s fledgling literary career can be described as anything but normal. Extraordinary, meteoric, phenomenal or prodigious, perhaps. Other superlatives are available.

After writing numerous short stories, the Irish author’s first novel, Conversation with Friends, was published in 2017 following a seven-way bidding war for the rights. Her second book, Normal People, quickly followed in 2018, receiving a Man Booker Prize nomination and being named Irish Novel of the Year and Waterstones’ Book of the Year. It also won the Costa Book Awards’ novel category and the 2019 Women’s Prize for Fiction.

Element Pictures (Dublin Murders) had optioned the television rights to both Conversation with Friends and Normal People, but it’s the latter that will arrive on the small screen first. Rooney is adapting her own novel alongside Alice Birch (Lady Macbeth, Succession) and Mark O’Rowe (Temple), in a coproduction between UK online channel BBC3 and US streamer Hulu.

The story follows Marianne and Connell’s relationship from the end of their school days in a small town in the west of Ireland to their undergraduate years at Dublin’s Trinity College. At school, Connell is well-liked and popular, while Marianne is lonely, proud and intimidating. But when Connell comes to pick up his mother from her cleaning job at Marianne’s house, a strange and indelible connection grows between the two teenagers. A year later, they’re both studying in Dublin and Marianne has found her feet in a new social world but Connell finds himself on the sidelines, shy and uncertain.

Through the course of the plot, the pair weave in and out of each other’s lives as the story explores just how complicated intimacy and young love can be.

“I only finished writing this book at the end of 2017, so it’s quite surreal and even freakish that it already exists as a TV show,” Rooney tells DQ. “It’s frightening but also rewarding and fun for me. Because I was involved in the project from the very beginning and in the casting process, I really did slowly become acclimatised to the fact that other people were going to be playing these parts and other people would be involved in making all kinds of creative decisions about the television show. So I’m just very thankful the people who were involved were people I felt I could really trust and who really wanted to stay true to the spirit of what we were trying to achieve with the TV show.”

Rooney says she wasn’t concerned about other people interpreting her story for a different medium. “I had to let go of the book when I published it because, as soon as something like that goes out into the world in any form, it’s no longer yours,” she notes. But the author describes her move into TV as an experience that bears little resemblance to her life as a novelist.

“My creative process in writing both books and the one I’m working on now is completely solitary, it’s really just me on my own all day,” she explains. “It was a huge shift in what I was used to, and I found it a lot of fun. Going to meetings was always really fun and energising but definitely not what I was used to thinking of as creative work. I had to reorientate my brain in that sense. It’s not my natural way of working, but I found it fascinating and really fun while, at the same time, exhausting in a way that working on a novel isn’t necessarily.”

The team at Element had read Normal People before it was published and were quick to jump on it before it became a literary juggernaut. Director Lenny Abrahamson (Room) was also involved from an early stage, while Rooney, who also executive produces, soon decided she wanted to be involved in more than an advisory capacity.

Crafting an outline of the 12-part series, with each episode running to 30 minutes, comprised the bulk of the work, Rooney says, owing to the key decisions being made over story structure and chronology and how closely the show would follow events in the book.

“Once we’d locked down an idea that everyone was happy with in terms of how we were breaking up the book into episodes, I would write a draft, send it around and get some notes back. Then I’d have a meeting with Alice or the team and we’d discuss and do rewrites,” Rooney says. “Most of the actual writing still took place on my own, but it was a collaborative process deciding how to attack this story in terms of transforming it into a number of episodes.”

Rooney says that while the series is “enormously faithful” to the source material, it uses a different language to tell the story – namely the language of television. What has definitely been preserved in the adaptation is the world of Marianne and Connell, played by Daisy Edgar-Jones and television newcomer Paul Mescal respectively, with the action unfolding in Dublin, the Irish town of Sligo, and Italy.

“It would have been possible to adapt this book and set it anywhere in the world. It’s a love story about two people, and maybe it doesn’t matter so much where it is, it’s just about their relationship,” Rooney says. “But, from the very beginning, Lenny was really interested in trying to maintain, in all its specificity, the exact kind of social world they inhabit and how that shapes them – the small town they grow up in, the university they go to and all the details of that. That was something that made me feel really energised about doing the adaptation in this particular way.”

The author says the book has remained front of mind throughout the process, with the production team and the actors dipping back into Rooney’s novel whenever they wanted a clearer idea of a character’s situation at any point in the story.

“It was very much the core text that we kept coming back to whenever we ran into a problem or difficulty with the adaptation,” she says. “That was generally felt all round, but I also think we all felt the importance of doing something new because we had all this armoury of new techniques at our disposal. TV is so rich and offers so much possibility that we wanted to be sure we were using all that and using the book in a way that felt faithful to the form as well as to the story.”

Rooney co-wrote episodes one to six with Birch, who then wrote episodes seven to 10 and 12. O’Rowe picked up number 11. Behind the camera, executive producer and lead director Abrahamson took on one to six, with Hettie McDonald (Howards End) helming the rest.

Birch has previous experience with adaptations, having brought 19th century Russian author Nikolai Leskov’s Lady Macbeth of the Mtsensk District to the big screen in 2016 under the shorter title Lady Macbeth. “This one’s been completely different. Leskov is long dead and I don’t see everybody on the Tube reading that book,” she says. “So many people talk about reading [Normal People] and hoovering it up. When I read it, it was quite an emotional experience, so I want to recreate that and find a way to do something similar on screen.”

Rooney had already written drafts of the first six episodes when Birch joined the project. She then took a pass at the scripts, offered some notes and wrote the later episodes

“We wanted to make each episode feel quite distinctive,” Birch explains. “In the same way the book operates, each time you begin a new chapter and they’ve moved on a few months and so much has changed, it’s like opening a letter each time, hunting for new information. So we wanted to recreate that, but it’s a different thing to recreate on screen.”

Birch had read both Rooney novels and describes working on Normal People as a dream job. “I’d read Conversations with Friends and then Normal People very soon after it came out,” she says. “I did something I never do and asked my agent if they were making it and if I could do it. They were in the very early stages, so when they called and asked if I wanted to be involved, it was a really easy yes.”

Birch shared a coffee with Rooney in Dublin, where she was given a tour of the key locations in the novel. “She’s so clear in her writing, and her scripts were very clear as well,” she says of her writing partner. “When I would write an episode or do a rewrite of a draft, she would give notes back. The conversation was always through the characters. She’s so open and obviously knows those characters and that world better than anybody.”

While Normal People has enjoyed tremendous success in print, legions of fans are now eagerly awaiting the chance to follow the intoxicating romance between Marianne and Connell all over again, with Endeavor Content distributing the series internationally. Meanwhile, the BBC has ordered Conversations with Friends to series, with Element reuniting with Rooney and Abrahamson. Again set in Dublin, it follows college students Frances and Bobbi, and the strange, unexpected connection they forge with married couple Melissa and Nick.

“It’s an extraordinary relationship between these two incredibly young people,” Birch adds of Normal People. “What happens in one moment is relatively small, delicate and emotional, but this kind of relationship doesn’t happen between two people at that age of life. That’s the extraordinary thing.”