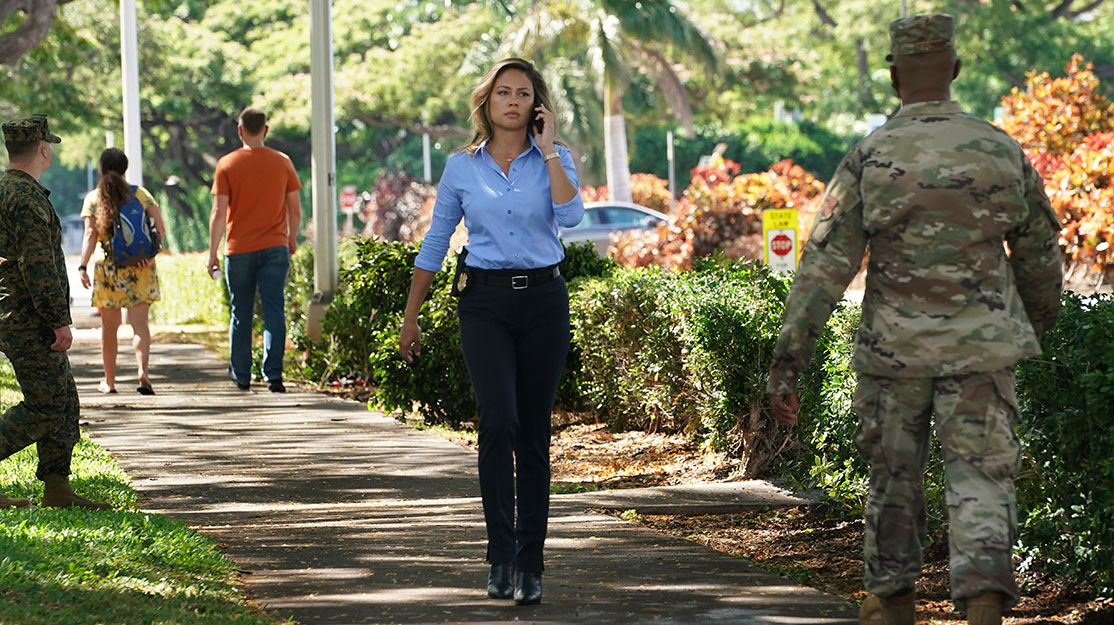 On air since 2003, US drama NCIS has regularly been named the most watched series in the world thanks to its blend of military action, detective mysteries and family relationships. Now heading into its 19th season, the show follows members of the Naval Criminal Investigative Service (NCIS)’s major case response team in Washington DC, led by Special Agent Leroy Gibbs (longtime star and executive producer Mark Harmon).

A spin-off from Naval legal drama JAG, which aired for 10 seasons until 2005, NCIS has itself given rise to numerous new series set across the US. NCIS: Los Angeles arrived in 2009 and goes into its 13th season this fall, while NCIS: New Orleans debuted in 2014 and ran for seven seasons until its finale in May this year.

Now a fourth instalment of the franchise arrives on US network CBS in the idyllic form of NCIS: Hawai’i, which makes its bow today. Set on the sun-soaked shores of the Aloha State, the series is notable for introducing the first female lead of an NCIS show.

Special Agent Jane Tennant (played by Vanessa Lachey) is in charge of NCIS Pearl Harbor, having risen through the ranks of a system that has pushed against her every step of the way. Together with her team of specialists, she must balance her duty to investigate high-stakes crimes involving military personnel and national security with the demands of raising her two children.

When DQ speaks to executive producers Matt Bosack, Jan Nash and Christopher Silber, the trio are in the midst of a traditional US network production cycle, which means balancing the spinning plates of writing scripts, filming episodes and competing post-production simultaneously. That process is complicated further once the show then starts airing.

The punishing process is nothing new for Nash and Silber, who are NCIS veterans. Nash has worked on the New Orleans show and also has credits on Black Lightning, Unforgettable and Without a Trace. Silber has served “two tours of the mothership” and also worked on New Orleans, having previously written and produced on Elementary and CSI: NY. Bosack previously worked on SEAL Team and Shooter.

“Somebody observed when we were working on breaking the final episode of our initial order that we were actively in process on all 13 episodes,” Nash says. “I was fine [before then]. But when somebody said it out loud, I immediately got very, very tired.

“We were already excited about the show and then we added writers and actors and we started shooting it. It all made us even more excited. There is inevitably a moment where something doesn’t live up to what you hope it will be. In my mind, we have not hit that moment yet because everybody has shown up and actually overdelivered on what we hoped they would do. So far, it’s been a very fun ride.”

Of course, the show’s Hawaiian setting offers picture-postcard locations wherever a camera is pointed. But specifically to the show’s NCIS premise, the islands’ substantial military presence comprising thousands of uniformed personnel representing numerous installations means there is huge scope for the case-of-the-week format.

“There are a number of interesting opportunities as we’ve been breaking stories to find unique storylines, unique characters and unique worlds to explore from the military aspect,” Bosack explains. “Then, of course, there’s the other side – the islands themselves. We felt there was an opportunity with this show to dive into the different parts of the islands. It’s a melting pot, with all kinds of diverse cultures represented there. Being able to take NCIS to this place, we’ve just had such an advantage in terms of trying to come up with interesting storylines and characters to include in this magical franchise we have.”

Making the lead character a woman was also a conscious decision. “We’re always going to have a Navy crime of some form, but to tell stories from the perspective of a woman in a leadership position already gives you a slightly different bent to the way you would tell stories that might feel familiar to some people who’ve seen all 700 episodes of NCIS,” adds Nash. “Hopefully they will feel fresh coming through the prism of a female leader of the team.”

With so many episodes under the NCIS banner, what’s the secret to its success? “There’s an X factor to it that is wonderfully elusive,” says Silber. “But what it comes down to is strong, engaging characters with strong, engaging relationships. Obviously, cases are important. You want to have a good mystery, but people keep coming back to all of the NCISs for the relationships between the characters, for some unexpected humour and for some heart.”

For Nash, there is a certain alchemy behind the series, set down in part by NCIS lead Harmon. “That team of people [on the original series] led by Mark, who is a very charismatic actor, created a foundation that allowed people to enjoy these mysteries,” she says. “When a show becomes something you love, you stay with it, even if it moves over to Los Angeles or New Orleans or Hawaii. You stay with it because you already loved it.”

The challenge for this new show, then, is to not only give existing fans more of what they love, but to entice new viewers to give it a try. “We’re hoping Jane Tennant as a female leader and our diverse cast of very talented young actors will help expand our pool of people who will come to the show. So far, there’s no proof that will happen, but that’s what we’re hoping for,” Nash says.

NCIS: Hawai’i might also be seen as the latest step in the increasing ‘franchisation’ of television and film, with books, comics and existing IP giving rise to numerous spin-offs, sequels and prequels. But Silber says that, from the start, he and his producing partners set out to make the show different from its siblings and expand the world of a franchise that has been around “since before my high schooler was born.”

“That was important to me and Jan, to Matt as well, as we went on this journey. While we would all love to create our own original shows, we have this opportunity to bring people who like the brand something they didn’t expect and expand it just a little bit. That’s an honour for us.”

Conversations about making NCIS: Hawai’i a reality began in summer 2020 before Nash, Silber and Bosack first began working on a pitch. A pilot script was ordered by CBS but, rather than following the traditional cycle of filming the pilot, the network immediately committed to a series order.

In addition, unlike previous NCIS spin-offs and the original show, NCIS: Hawai’i wasn’t introduced to viewers through a ‘backdoor pilot,’ where new characters appear in an existing show before headlining their own – a move that further solidifies the creative team’s desire to plot their own course.

Writing the series started with the diverse members of the eight-strong staff meeting over Zoom and bringing plotlines based on their own perspectives or personal experiences to the virtual whiteboard. Hawaii also afforded them numerous locations in which to set the storylines, from jungles and beaches to cities and countryside.

“We’ve also been blessed with a wonderful crew who are already working like a family,” says Bosack. “They’ve worked together for years on other shows and, from day one, it was a well-oiled machine. It’s just been such a blessed environment.”

The downside, if there is one, is the distance: Hawaii is about 2,500 miles from LA. “Anything that isn’t on that island needs to be brought to that island, whether it’s an actor, a director or, say, a car you want to have in an episode,” explains Nash. “You do have to be very organised and sometimes nimble. Covid has made some things a little more complex. But the positive aspects of shooting in Hawaii have been really amazing for the show and for the experience.”

The series certainly isn’t short of spectacle, whether that’s the Hawaiian landscapes or scenes in the opening episode in which a fighter jet crashes into a cliff face, and a helicopter lands in the middle of a football pitch during a game.

“That’s an element of the franchise – fun, exciting action,” says Silber. “We’ve got a great stunt team, a water team and a lot of different kinds of vehicles we can use. We try to be creative when we think of these action sequences and make them worth our while.”

“I’m not going to lie, when that helicopter landed on that soccer field, I was as happy being on a shoot as I’ve ever been in my entire life,” says Nash. “It’s absurd, but I was genuinely happy. TV’s a little bit magic in that regard for writers. You have an idea, you talk about it, you put it in a story, you put it on a piece of paper, and then a decent percentage of the time, if it’s not insane, it happens. I thought the helicopter was maybe insane, but there it was and it was amazing.”

Helicopter is seemingly Vanessa’s transport of choice, as it interrupts her daughter’s match to escort her to the base to investigate the case of the crashed jet. Silber describes the character as “a strong leader of an NCIS team and a single mother, who takes care of her kids, who was empathetic but also good at fighting… and also good at everything.” He adds: “To find someone to fit that role, who has that charisma, is not an easy task but Vanessa came in and she just brought it all. It was the first time we were all like, ‘Oh, OK, there’s someone who can do this.’”

Led by Lachey and with more compelling mysteries, charismatic characters, heartfelt relationships and touches of humour, NCIS: Hawai’i has all the ingredients needed to replicate the worldwide success of its sister series and introduce more viewers to the world of the Naval Criminal Investigation Service.

“The stories have so many possibilities,” says Silber. “It’s about good mysteries. Everyone loves that. It’s about the charisma and the relationships between your characters – and a little bit of humour. That’s what it takes.”