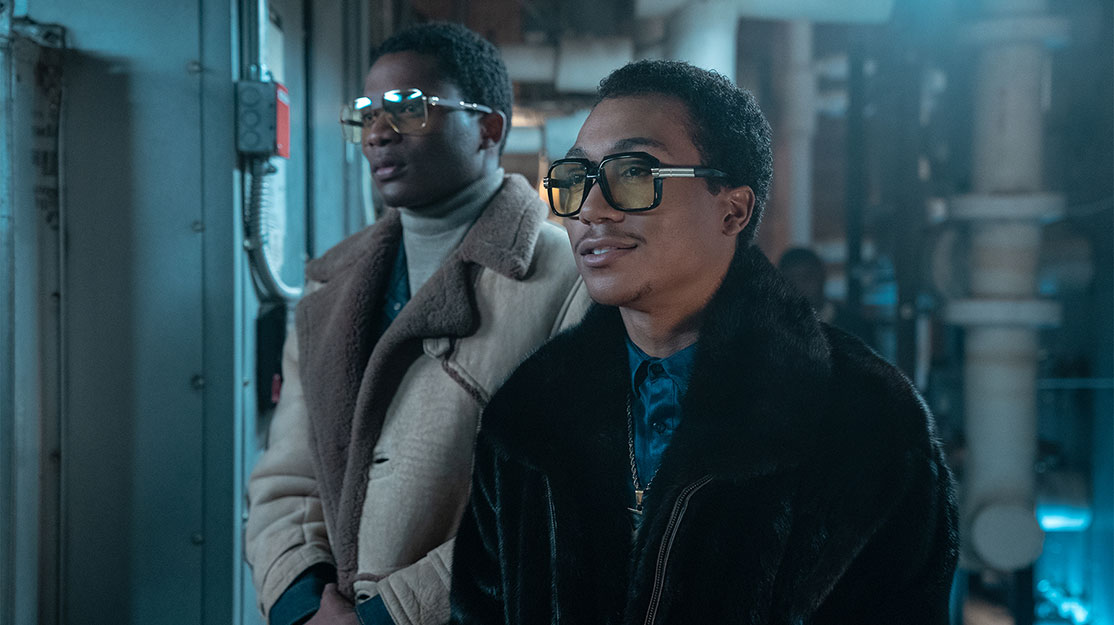 All in the Family

BMF showrunner Randy Huggins reveals how he dramatised the true story of Black Mafia Family, one of the most influential crime organisations in the US, set against the dazzling backdrop of 1980s Detroit.

Inspired by true events, Starz drama BMF tells the story of two brothers, Demetrius ‘Big Meech’ Flenory and Terry ‘Southwest T’ Flenory, who rose from the inner-city streets of southwest Detroit in the late 1980s to build the biggest drug-trafficking organisation in the US, known as Black Mafia Family.

The group later entered the music business before a string of Drug Enforcement Agency raids targeting BMF in the 2000s led to numerous arrests. In 2008, Demetrius and Terry were both sentenced to 30 years in prison.

The eight-part drama, which debuts on Starz in the US and on streamer StarzPlay on September 26, explores the brothers’ upbringing and the dynamics that led them to form the criminal family that would raise them out of poverty – from their parents and their spiritual advisor, Pastor Swift – as conflict between the siblings threatens to disrupt their search for the American dream.

First announced by executive producer and rap star Curtis ‘50 Cent’ Jackson in 2019, the show has been three years in the making for showrunner Randy Huggins, who says shooting during the Covid-19 pandemic was just one of the complications he had to overcome to bring the Flenory brothers’ story to air.

“Everybody wants the story to be authentic as possible, but these two brothers are incarcerated so I can only talk on the phone to Meech 10 minutes at a time,” he tells DQ. “When I go visit them, I can only visit for six hours and I can’t take a pen or paper, so you listen for six hours and then you run to your car and you try to scribble everything down.

“I’m doing a story on two brothers who right now are estranged, but I’m in the middle and I need to get each of their perspectives so I can balance it out and tell an accurate story. This has been an experience that has never had a dull day, let me just put it that way.”

The story of BMF has strong resonance for Huggins, who is a Detroit native and grew up in the city at the same time as the Flenory brothers – “two of the biggest urban street legends” to ever come out of the Midwestern city.

“For whatever reason – reasons of survival – they were able to transcend the streets to entertainment and get into the music industry. There are so many artists like Jeezy and TI who you have to attribute to them in some kind of capacity,” Huggins says. But it is 1980s Detroit that imposes itself on the story in resplendent detail, from the fashion and food to the techno sounds that reverberated around the city at the time.

“The music they grew up with was the music I grew up with, and a lot of that music in 1980s Detroit was techno. That’s what makes Detroit unique,” he continues. “Techno was founded in Detroit with The Belville Three – Derrick May, Kevin Saunderson and Juan Atkins. To be able to put that into this series, which grounds Detroit [in reality], is just fascinating. To have that backdrop for our show, in this urban show about these two brothers in inner-city Detroit, is really special for me.”

From the outset, it was Demetrius who pushed the show to tell the story of him and his brother starting out, when they were “poor as shit,” reveals Huggins. At that time, the showrunner continues, blue-collar Detroit was losing some of its automotive plants, had a failing school system and was battling police corruption, while a new drug called crack cocaine was finding its way onto the streets.

“What’s really interesting is understanding the choices they made as kids,” he says. “I thought it was essential to show the original basis of their relationship and a lot of the decisions they make, so that when we see their relationship and their partnership grow, you can still look back and be like, ‘That’s still the same person he was when we started watching this series at the beginning.’”

Having worked with the rapper-turned-actor-and-producer on fellow Starz series Power, Huggins immediately agreed to board BMF when Jackson contacted him about the project. Jackson then put Huggins on the phone with Demetrius, which coincidentally is Huggins’ middle name – something that, combined with a shared sense of humour, helped the pair strike up an instant connection. Huggins subsequently spoke to Demetrius’s sister and his best friend, who became consulting producers on the show.

“One of the things I really wanted to convey [to the family] was that I wasn’t trying to tell a salacious story,” he says. “Some moments may be like that, but that’s not the basis of what I’m trying to tell. I’m really trying to tell a story of brotherhood, of love, about these two brothers put into these circumstances who were really just after their slice of the American dream. Once I was able to convey that, the families started opening up to me more. Then once we got greenlit, they opened up all the way, and Lucille Flenory [their mother] opened up her home and started sharing pictures and every story you can name.”

Huggins would also speak to Demetrius at least once a week by telephone, learning to ask one question and then let him speak in order to avoid taking up too much of the prison-limited call time. But there came a point where the showrunner would have to step away from the family anecdotes to ensure the series he was writing kept some distance from real events. A title card at the start of the series explains that while BMF is only loosely based on the truth, “a lot of this shit may have actually happened.”

“I’m not making a documentary. I’m making a TV show while also maintaining a level of authenticity,” Huggins says. “Sometimes some of the challenge is trying to get the participants to understand that. But Meech and Terry are very smart. They get it.”

BMF’s biggest use of creative licence related to the timeline, where events were brought closer together to ensure they made it into the final cut. “Trying to get the timeframe for where we want to get to, I had to make certain choices. That’s just a part of it,” Huggins adds. “But there are not a lot of things in here that aren’t based on something I heard or learned from talking to the Flenorys.”

The cast features Da’Vinchi (All American) as Terry, Russell Hornsby (Lincoln Rhyme) as the brothers’ father Charles, and Michole Briana White (Goliath) as their mother Lucille, with rapper Snoop Dogg appearing as Pastor Swift. But after Jackson conducted nationwide auditions in Atlanta, Detroit and LA to find an actor to play Demetrius, the role eventually fell to his real-life son, Demetrius Flenory Jr.

Demetrius had encouraged Huggins to avoid using establish actors where possible in the hope of discovering new talent, and they found it in Demetrius Jr. Jackson put him into acting classes run by Tasha Smith (Empire, Power), who then came on board to direct the series.

“You can’t script it. This is like a movie in itself,” Huggins says. “What was really interesting is no matter what you may think about what his father and his uncle did, had they not done it, this kid would not have an opportunity off the street to be a lead in a TV show.

Smith also shared Huggins’ vision of taking a romanticised view of BMF in the same way Italian mob stories are told, in an attempt to humanise the brothers. “That enabled us to understand their choices,” he explains. “Not that you agree with them, but you understand the choices they made. She was also instrumental in saying, ‘Let’s go after Russell Hornsby. Let’s go after Michole Briana White.’ We were able to put a veteran group of actors around our young actors to support them and help them even better throughout their journey.”

As well as Power, Huggins’ recent credits include Star, Rebel and Power Book II: Ghost. He started his career on series such as The Shield, The Unit and Criminal Minds, which he says have shaped his emphasis on a team mentality away from the camera – something that also reflects his love of sports, particularly basketball, growing up.

“A lot of what I’m doing now, I learned from writing on The Shield with [showrunner] Shawn Ryan, on The Unit with David Mamet and with Glenn Mazzara [The Shield, Crash]. But a lot of what I’m utilising came from Power,” he says of the show about a nightclub owner living a double life as a ruthless drug dealer. “I have to give credit to [creator] Courtney Kemp because a lot of what I’m doing is based on what we did on Power in the first three seasons, but I’ve put my own spin on it.

“I always laugh with my writers in the room and say good artists borrow but great artists steal. I’m stealing all the lessons I learnt along my journey to bring them in here and create BMF.”

To foster that sense of family on set, particularly during a pandemic that meant cast and crew were being tested three times a week, Huggins and Jackson would host online dinners, sending takeaways to everyone’s homes. “It was about creating that camaraderie, that family environment that in many instances Meech and Terry created,” he says. “In many ways, we were becoming BMF in the process of making BMF.”

Produced by Jackson’s G-Unit Film and Television in association with Lionsgate Television, Huggins pitches BMF as The Wonder Years meets The Sopranos in 1980s Detroit, perhaps with a spoonful of Power and FX drama Snowfall mixed in too. It all adds up to an intense and dramatic family portrait of growing up at that time and the decisions Demetrius and Terry took, rightly or wrongly, in search of a better life.

“We’re only chipping the iceberg of their story, so I have much more story to tell, which is only going to get even more heightened and more dramatic,” Huggins says. “I just hope I get the opportunity to continue telling this tale because it’s really going to take people on a ride and make them jump out of their seat. At the end of the day, that’s what I’m really trying to do – make people jump out of that doggone seat.”