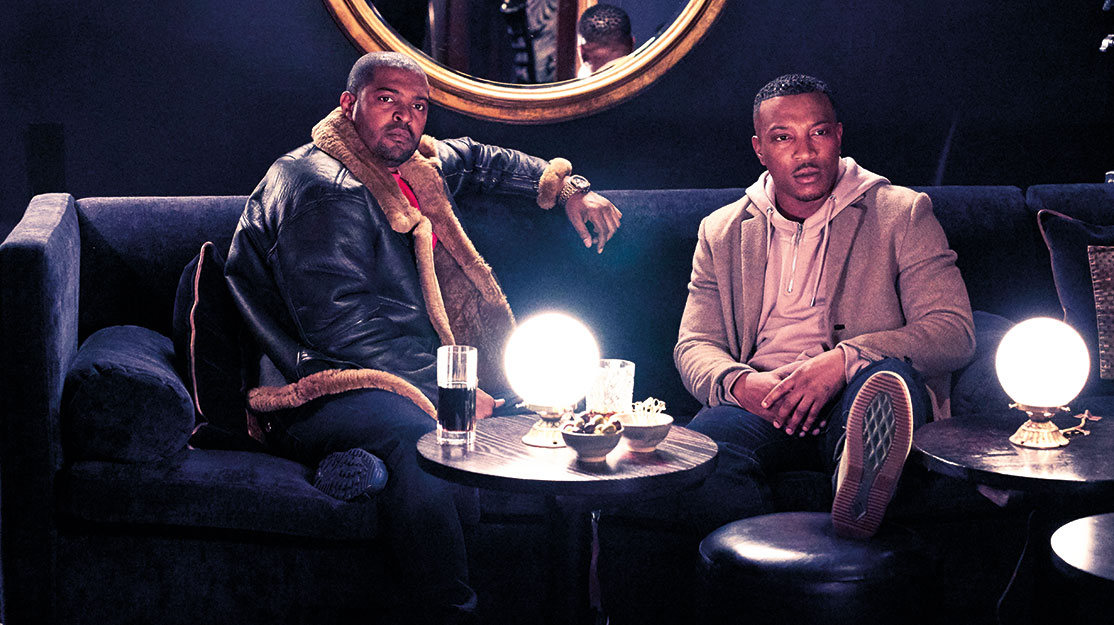 On the set of Sky1 original drama Bulletproof, stars and co-creators Noel Clarke and Ashley Walters discuss the relationship at the heart of the series and explain how its action-packed stories make it stand out in the crowded crime genre.

On a quiet weekday lunchtime in central London, the world-famous Fabric nightclub is undergoing something of a transformation. Outside, new signs have been installed to rebrand the underground venue as Prometheus, while crew members are carrying equipment and cables between the numerous levels and twisting staircases.

It’s in the basement, beneath the ambient glow of blue and pink neon lights, that scenes from the second season of UK crime drama Bulletproof are being filmed. Series co-creators and stars Noel Clarke and Ashley Walters are in character as detectives Aaron Bishop and Ronnie Pike respectively, sitting on one side of a table and drinking glasses of what appears to be champagne.

Launching in May 2018, the series became Sky1’s biggest drama of that year, with childhood friends Bishop and Pike – the former grew up in foster homes and on the streets, while the latter comes from a high-achieving middle-class family – working together inside the National Crime Agency where they deal with serious organised crime while putting their family and friendships to the test.

Produced by Vertigo Films and distributed by NBCUniversal International Distribution, Bulletproof was quickly recommissioned following the conclusion of its first run, and filming on season two began in February last year. When DQ visits the set, it’s day 69, with the shoot having already taken in scenes on location in Amsterdam and Malta, which doubles for Cyprus. Today, two cameras are in play, one focusing on Clarke and the other side on to Walters.

Season two, expanded from six to eight episodes, aims to have more of an international feel, with the drama also moving away from its episodic format to focus more on one serialised story. Stunts and locations have all been scaled up from season one, and while Bulletproof has never shied away from a bit of action, that greater ambition is particularly evident in car chases filmed through the streets of Amsterdam.

Back in London, as the sounds of a train passing overhead rumble through the foundations, the cameras are re-set on Mikey (Ben Tavassoli). Sitting opposite Bishop and Pike, the character is the nephew of a Cypriot crime family the undercover detectives are attempting to infiltrate.

Throughout its first season, Bulletproof stood out for its buddy-cop humour, high-octane action sequences and the chemistry between its two leads – factors that saw the series picked up by US network The CW.

“What makes the show different is you have a level of action a lot of shows don’t have,” Clarke explains during a break from filming. “That’s one of the things that makes it stand out, as well as the humour and the chemistry we bring to it as the two main characters. For me, whether it’s a day where both of us are having banter with each other or it’s an action-packed day, every day is enjoyable.”

“There isn’t another show like this on UK TV,” says Walters. “From the beginning, we’ve always said this cannot be your standard UK cop drama. We want it on the same scale as Lethal Weapon and Bad Boys. That’s what we’ve always been reaching for. We’re not doing Miss Marple! This is some real stuff. So it’s always been this way for us, it’s what we’ve always wanted. We’re always mindful, when we’re going through scripts or concepts and ideas, that we always keep that element in there. It’s one of the things that sets us aside from everything else.”

Also differentiating the show from its genre peers are Clarke and Walters themselves, with former Doctor Who star Clarke noting: “Once you put both of us in it, immediately there’s a show with two black male leads. You then sit down and think, ‘Should we be proud we did it, or should everyone else be ashamed it hadn’t been done before?’

“Then once we are doing it, there’s things we can say. We can be in the woods together and one of us can say, ‘You know, we always get killed in the woods first.’ It’s funny because, in a lot of films over the years, when there’s a group of friends including a black guy, it became a running joke within the ether that the black man would die first. So when there’s two of us in the woods, we can say stuff like that. If it was a pair of people of different colours, you probably couldn’t say that. You can’t always make those in-jokes, and that’s what sets us apart.”

Having created Bulletproof with Nick Love (The Football Factory), the actors are extensively involved in the development and plotting of the series. While Clarke is a regular writer and director, with films like Kidulthood to his name, Walters also stepped in to co-write an episode this season.

They joke that a lot of their lines are improvised. “We don’t really pay attention to the script, unless we’ve written the episode ourselves,” Clarke says. “We’re in the story room, we storyline and we’re there all the time, so we know the story from A to B. Our script supervisor has a nightmare. She says, ‘Are you going to say this here?’ and I say, ‘I don’t know what I’m going to say, to be honest.’”

The duo’s confidence in ad-libbing stems from the fact they helped create the characters themselves. “It’s easy for us because we know the characters inside and out,” says Walters, who also stars in Top Boy, the UK crime drama series recently revived by Netflix via a helping hand from hip-hop star Drake. “We created them. Working together as long as we have, we get the timing. We know when the other person is going to speak and when they’re not; we know each other’s facial expressions. So, for us, it’s simple. For the other actors, they’ve been learning their lines and we just throw the pages out of the window.”

Clarke, himself an avid film and TV viewer, says he was confident Bulletproof would find an audience because it’s the kind of show that was missing from the schedules, yet one no one wanted to make. “It was one of those things where [even though UK viewers] eat up Lethal Weapon, Bad Boys, Miami Vice and all those titles, we flick on [detective series] Inspector Morse. Why are we not doing that sort of stuff?

“Years ago, we almost did it in our very British way – The Professionals, The Sweeney. Those shows had a different edge because they were very ‘geezerish.’ But it was always the case I felt people, especially working-class people, needed to see a show that represented them. They come home after a hard day’s work and [want to find something they relate to]. Part of the success of the show and the reason people talk about it is they feel it is theirs, they have ownership of it and can relate to us. We’re tangible. That’s an important thing.”

Discussing his move into writing, Walters says it’s something he had always wanted to do, with the process leading him to start his own production company. “But I’ve always understood how much of your time it takes and how disciplined you have to be, and in season one I didn’t think I was ready to do it,” he adds. “This time around, I took on the responsibility of co-writing one of the episodes, which was fun. I’m enjoying that – I hope I can do it a bit more.”

It was Love’s idea to pursue the undercover storyline in season two, with around 12 people gathering together for an initial two-week writing room that broke down the story. After a fortnight’s break, they reconvened for a further week to finish the outlines. “It’s a process. Some of them are very young, diverse writers coming through who would probably never have got a look-in. But because it’s our show, we’re involved in making sure they’re in the room,” Clarke explains. “You need all the people in the room just to question things, just to interrogate things. That’s how we do it.”

Set a year after season one, Bulletproof returns with a new action-packed story that promises to push Bishop and Pike’s friendship to the extreme. “Bishop really wants to focus on bringing people down and being a real lonesome person. He relies heavily on Pike, probably more than he knows, but of course Pike’s got a family,” Clarke says.

“He has a wife and kids, so he’s being pulled from pillar to post, especially after last season. His daughter was kidnapped at one stage, so his wife is still reeling from all of that stuff. That stress is there. Bishop doesn’t really understand that. So that’s how they’re tested a little bit. Bishop pulls them further and further undercover and Pike’s a little reticent at first.”

It’s the relationship between the two leading characters that Clarke and Walters believe viewers have responded to the most, with both actors saying they are now recognised more for Bulletproof than any of their previous roles.

“You know you’ve created something when people stop mentioning Kidulthood or Doctor Who,” says Clarke. “I really believe in the way people have invested in the characters – and not just us two but the extended team. You could just have an episode where we’re just staking a place out and have that banter and people would buy into it because of the relationship with the two guys. That was the prime thing we wanted [in season two], and we wanted to make sure the action levels stayed up, which they have. Everyone will be really happy with season two.”

“We were quietly confident [about the show’s success], but there’s always a part of you that thinks, ‘Are people going to love it?’” Walters adds. “We both come from huge shows like Doctor Who and Top Boy – stuff people will never forget, it never dies. The first inkling I had that this show was good was that people stopped talking about Top Boy. For five or six years, I’ve just had Top Boy. I have been working on other stuff, but now it’s fully Bulletproof. People just love it and we’re very happy.”