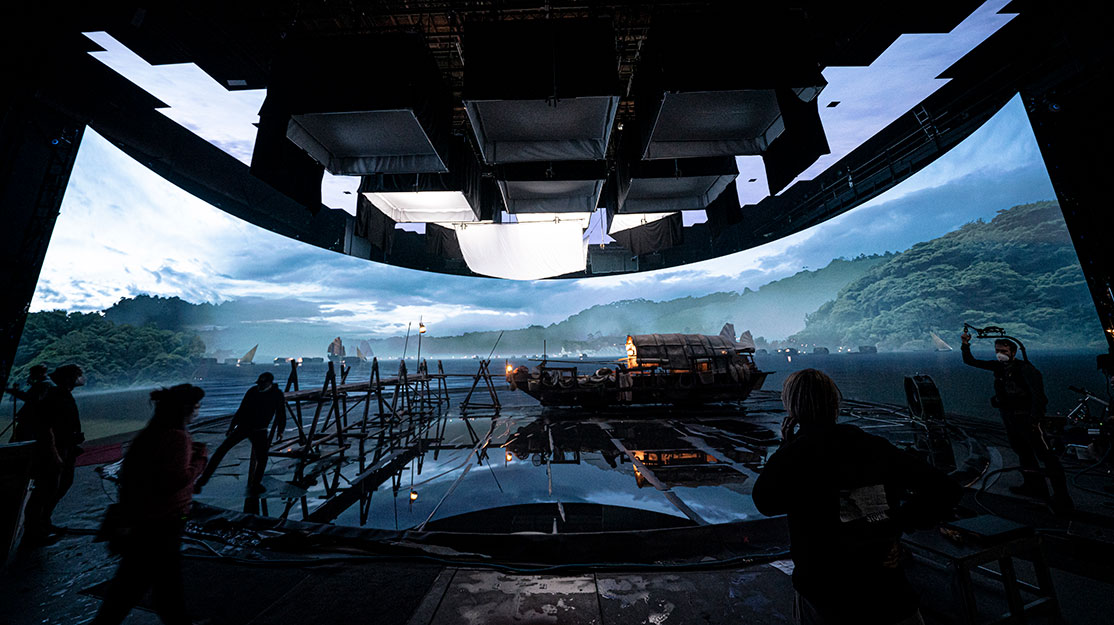 From the creators of Dark comes 1899, a mystery series set aboard a passenger ship in the middle of the Atlantic Ocean. DQ speaks to Jantje Friese and Baran bo Odar about their love of puzzles and how the show was made in a virtual production studio.

For three seasons, Dark creators Baran bo Odar and Jantje Friese led viewers through a time-travelling mystery that became a global hit for Netflix. Now the husband-and-wife creative team are set to send minds spinning once again as they embark on another wild ride with 1899.

Featuring an international cast speaking multiple languages, the cryptic period drama follows events on board an immigrant steam ship carrying passengers from Europe to New York. Despite their contrasting backgrounds, the travellers are united by their hopes for a new century and their future abroad.

However, when they discover a second ship, the Prometheus, adrift on the open sea having been missing for several months, their journey takes an unexpected turn. What they find on board promises to turn their passage into a terrifying riddle, connecting each passenger’s past through a web of secrets.

As the series opens, viewers will be drawn into the nightmarish mind of Maura (Emily Beecham), a British doctor who soon comes to the rescue of a pregnant Danish woman. She then emerges as one of several key figures involved in the mystery at the heart of the show – one that only becomes clearer the further viewers go down the rabbit hole. The cast also includes Andreas Pietschmann, Maciej Musiał, Aneurin Barnard, Miguel Bernardeau, Lucas Lynggaard Tønnesen, Clara Rosager, José Pimentão, Mathilde Ollivier, Jonas Bloquet, Yann Gael, Isabella Wei, Gabby Wong, Rosalie Craig, Maria Erwolter and Alexandre Willaume.

Following up a hit series can be a tricky path for showrunners to navigate, though Odar jokes that rather than hitting a creative brick wall, their problem is they have too many ideas to choose from.

“But it’s because we get bored easily and, if something’s not working out, we constantly jump to the next idea and play around with that idea,” he tells DQ. “After those three seasons of Dark, it really helped us as filmmakers to see there are people out there who are interested in the stories we want to tell.

“We feel very humble that Dark was so well received and that there are weird people out there like us who like complex, weird stories that are dark and where you have to be an active viewer who has to watch, listen and take notes and can’t look on your phone while you watch.”

In fact, Friese and Odar had already pitched the idea behind 1899 to Netflix after the first season of Dark, and the streamer was on board from the outset – just as soon as Dark was completed.

“We constantly kept working on it, still focusing on Dark and finishing that show,” Odar adds. “It was a really long process, but it was always in our head. There was no way we wouldn’t do 1899.”

Beyond the central mystery, which the German creators say would be too spoilery to discuss in any detail, a key theme of the series is migration, a topic that is exemplified by an international cast playing a large ensemble of characters from all over the world, who must live together in a confined space during the voyage to New York.

After the refugee crisis in Europe over the last few years, “it felt like the Europe we grew up in was slowly fading away,” Friese says of the rise of nationalistic and far-right politics in many European countries, not to mention Donald Trump’s stay in the White House and Brexit in the UK.

“All the stuff that happened  changed the world. It was something that really stuck with us. We wanted to create not only a narrative that brings people from different countries and cultures together to go on a journey, but also, on the production side, we wanted to have an international crew, with people from all over the world creating something together, proving that it’s fine; we don’t have to kill each other. We can create content together and it works.”

As with Dark, the creators have laid out a puzzle for the audience to solve. But where they think the show stands apart from their previous hit is in the pacing. As the action plays out, the constant movement of the ship, the smoke rising from its funnels and the waves crashing against its hull give the impression the story is always moving forward, no matter how the plot may stop the characters in their tracks.

“It’s a melting pot of all these different nations, with a lot of aggression among them, so it’s definitely more violent and there’s more action, more crying, screaming, running… so it’s more like an interesting rollercoaster as a mystery experience than Dark, which was way slower,” Odar explains. “It was all about time travel, so we stretched time for as long as possible. We feel 1899 is at least much faster paced but hopefully just as entertaining as Dark.”

Though they are both co-showrunners, Friese is the head writer on 1899 and Odar directs all eight episodes. Now the show has been delivered ahead of its worldwide launch on Thursday, Friese jokes she might be suffering from a condition akin to “pregnancy amnesia,” where she has forgotten quite how tough and painful it was now that it’s over.

“It’s all a bit of a blur now,” she says. But when she first set out to develop the scripts, she tasked herself with walking the fine line between mapping out the key plot points and, crucially, the ending, while also giving her and her writing team enough room to be creative and flexible with the way the story played out.

“I always say you need to know where you’re going,” she continues. “You need to have your end destination, but while on your road trip, if you want to go left and visit that small, sweet town, then you should feel free to do that. It’s a little bit like that – planning and being flexible enough to also go with the flow on the way.”

With multiple characters to serve and no fewer than eight languages in the first episode alone, a certain amount of planning was needed, especially as Friese reveals that translating scripts or even just single sentences proved to be more complicated than she had expected. Conversations between her, the episode writer, the translator and a language assistant became common sidebars on draft scripts as they discussed how lines would be translated into Spanish, French, Danish or Cantonese – to name just a few of the languages involved – without losing the nuance of the dialogue.

Including multiple languages in 1899 was always one of the creators’ core ideas – one that also heightens the sense of unease and isolation among characters who do not understand each other yet are stuck together on a ship in the middle of the ocean.

“What they have to learn is that language should not be a barrier and they have to work together,” states Odar. “The common language in reality was English. Among the team and the cast, you had to speak English, otherwise it would be really hard to explain things. But it was really beautiful to also direct the different languages because it was so easy for the actors to play scenes where they don’t understand each other, because they literally didn’t.

“I found it was not as hard [directing] as it was for Friese with the writing because you get used to certain languages’ rhythm and how they should sound. You can then tell the actors they made a mistake because a line sounded different from the take before. It’s a really weird aspect that happened.”

However, it wasn’t just the complex plot or the inclusion of multiple characters and languages that made producing 1899 so demanding. The show was also filmed using revolutionary virtual production techniques previously harnessed by Star Wars series The Mandalorian.

Following Dark, Friese and Odar formed their own production company, Dark Ways. They then partnered with Studio Babelsberg in Germany to create Dark Bay, Europe’s first LED studio for virtual production, set within the historical halls of Potsdam Babelsberg, southwest of Berlin. 1899 marks the first production from both Dark Ways and Dark Bay.

The setup – known as The Volume – sees huge LED panels wrapped around a stage, with the ability to project any type of background behind the actors and seamlessly transport them to any kind of environment, real or imagined.

The decision to film 1899 this way was made early in development – and largely thanks to the Covid-19 pandemic. “We’re very traditional filmmakers; we wanted to do it in a very traditional way – travel to the locations we needed, build ship parts in a water tank in Malta, for example,” Odar says. “Then corona happened and we weren’t able to travel.”

There was even a period of a couple of weeks when the creators weren’t sure if 1899 would be made at all, until a Netflix executive suggested they explore the idea of virtual production. A test facility was built and trialled in London to give Odar and Friese a sense of how it works, before they redrafted their scripts and shooting plans to reflect how the show would now be filmed.

“The prep was structured completely differently; it takes longer than if you shoot in a conventional way,” Friese says. “One portion was us learning about the technology, but the other was creating content [the backdrops] up front, which you would usually create after you’re done shooting [on a green screen]. You have to be quite clear early on what backgrounds you need, and then those need to be programmed, so it’s a different approach. You’re pulling a portion of post-production into prep. That also needs a lot of adjustment for the crew to understand this is a different process.”

On set, Odar found the experience similar to being on a theatre stage surrounded by giant television screens.

“Actors also started to act like they were on stage at the very beginning, so I had to tell them, ‘You’re still in a movie. Do less, it’s better,’ but that was only for a couple of days,” he says. “For the actors, it was amazing because it’s really the toughest job for them to look at a green screen and pretend you’re on the ocean or in the desert. It’s super helpful for everyone to see it and even feel it. People got seasick on stage after a couple of hours, because the technology works so well that it actually fools your brain. It is a new way of filmmaking for the actors but it also helps immensely to dive into a world you have to pretend to be in.”

While 1899 is set in the past, production of the series has certainly harnessed futuristic filmmaking methods. But neither Odar or Friese believe it will overtake traditional techniques.

“Certain stories need that technology, as always with visual effects,” Odar adds. “If you need it to tell a story better, you should use visual effects. If you don’t need it, don’t use it. It’s not mandatory, but it will help a lot of projects to think bigger and not be afraid to have bigger sets like our dining room. Building it virtually also cost money, but not as much as actually building it.”