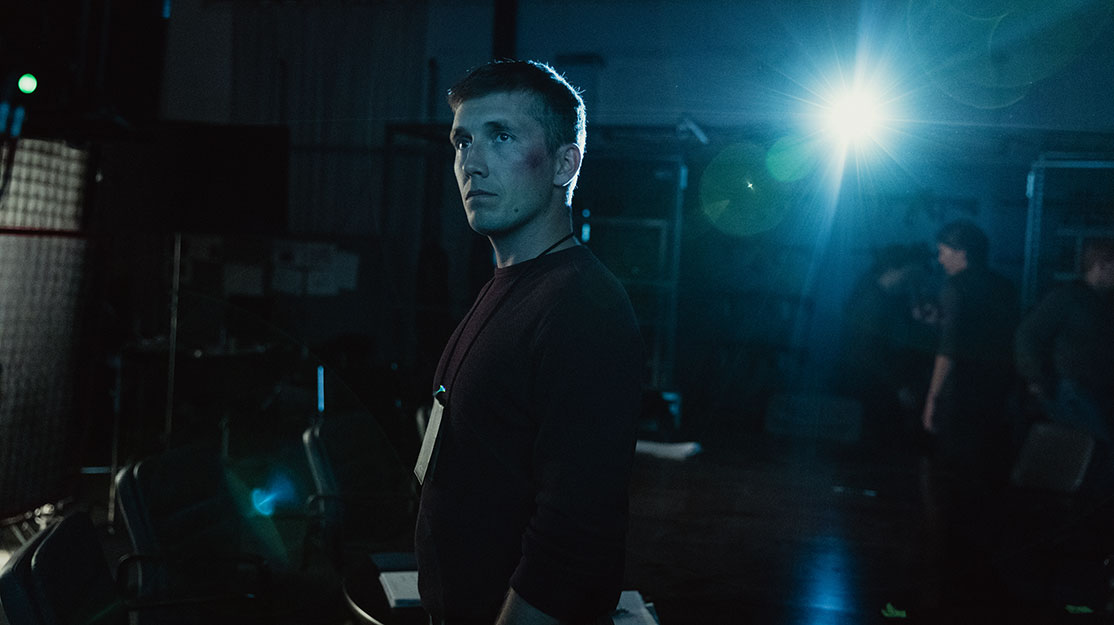 Two brothers begin a journey of self-discovery in Alfa, a multi-stranded Danish series that blends thriller and character drama. DQ speaks to writer and director Milad Avaz about his first television project.

As a writer, Denmark’s Milad Avaz has two feature film credits to his name: drama Mens vi lever (While We Live, 2017) and thriller Kollision (Collision, 2019). The launch of Alfa this Sunday marks not only his television debut but also the first time he has directed, helming all eight episodes of the TV2 series.

Produced by SF Studios Productions and Rocket Road Pictures, the eight-part story sets up the opposing worlds of estranged brothers Adam (Andreas Jessen) and Jakob (Andreas’ real-life brother Sebastian). When newly graduated stockbroker Adam discovers his father is dead, he leaves his stressful life to return to his roots and take on his father’s position as the leader of a biker community. Reunited with childhood friends Simon (Besir Zeciri) and Oliver (Ari Alexander), he follows personal ambitions and a hunger for power that see him clash with immigrant gangs, bikers and the police.

Meanwhile, Jakob has broken free from his past to join the police, being recruited to the anti-drug unit. But an inner struggle forces him to look for what he truly wants in life – and sets up a clash with his own brother.

With a four-season arc planned for the show, Avaz took on both writing and directing duties himself. Avaz’s brothers Misam and Mehdi produce the series, whose origins date back to 2009, when Avaz was a university student and he and a friend were looking to buy some marijuana in Christiania, an international commune in the heart of Copenhagen. Finding themselves surprised by the “bad service,” later on at home, over a few beers, they applied business studies strategies to drug dealing.

“The story’s facade is about Adam trying to reinvent the drug market,” Avaz explains. “But the deeper story is about the existential dread that exists because my generation is not living in wartime or coming off a huge stagnation in the economy. We grew up with our parents telling us life is going to be fucking great if you do everything right. You grow up with this thought that there’s something to the world you haven’t seen yet, or there’s a role for you that you haven’t found. Then you come out there and it’s like, ‘Not really.’

“No one really cares that you came into the world and you have your degrees and have done everything right. It’s kind of meaningless. That was the thing that happened to me, and I thought a lot of other people were feeling this way as well. I tried to fit that whole problem into the world of the drug market. What is it like moving from within to outside the structured world and vice versa? What are the limits to our society?”

Adam is the focus of season one. He has done everything right on paper, distancing himself from his family and his past, but he suffers from anxiety attacks and fears for his life, even though there is no actual threat against him.

“Then he starts re-engaging with his childhood friends and his dad’s old world that has been a recipe for disaster,” Avaz continues. “On the other side, Jakob is the first born. He’s like the classic Greek tragedy – he’s promised the kingdom but rejects it. He comes from an unstructured background and moves into the structured world, trying to find a new family that will provide him safety and the opposite of the life he has had. So we have these two brothers moving in opposite directions and seeing what that does to their mentality.”

Adam and Jakob’s stories won’t be fully told in season one, however, with Avaz intent on playing the long game with his characters. The opening season doesn’t focus specifically on their relationship but merely establishes them and their worlds.

“On the surface, season one is about Adam breaking with his mundane job and chasing adrenaline and fast money by trying to sell some weed he finds in his dad’s old belongings,” says Avaz, who concedes he is a bit like Adam, having struggled with anxiety and depression while working at an investment firm before moving to LA to start writing. “His drug world is my movie-making world,” Avaz adds.

TV2 had called Avaz in for a meeting after seeing While We Live, and he pitched them the four-season arc while openly admitting that answers to the questions raised by the series would not be immediately forthcoming. “They were OK with that, so the experiment was always about what it would be like if we made a four-season movie,” he says. “I’ve tried, with season one, to play on your expectations of the genre. It all seems very familiar because you are in a world you understand. From there, we can create something that completely shatters those expectations.”

Avaz says working in TV, rather than film, has given him the running time he needs to subvert expectations. He also trusts viewers to stick with a show that isn’t afraid to insert a third storyline set in Colombia that seemingly doesn’t have anything to do with Adam or Jakob. “I found that quite enticing,” he says. “It’s like making a short film within the series and letting people hang in there. It doesn’t fall into place until the last minute at the end of the season. There’s also a whole episode dedicated to the main antagonist.”

The writer-director says he never starts writing the scripts until he has completed the full outline for the series. Then, once he sits in front of his computer, he knows exactly what he’s going to write. “The main thing when you’re writing is you have to have enticing dialogue, with whole dynamics between characters and stuff. You can’t be thinking about where the scene needs to go,” he says. “You can’t be discovering all this other stuff because you need to have your attention on how this person acts in the moment. I spend most of my time finding out what the big scenes are and working from there.”

When the series moved into pre-production, he turned from writer to director, but one who felt at liberty to play with the material he had written. “If an actor asks something, I feel like a director owes it to the writer to stay true to their intentions, whereas I have the freedom to say, ‘Let’s go with something else.’ If I want to rewrite a whole page at lunch, I can do it because it’s my script. It offers a lot of freedom. I would really suggest all directors start writing their scripts.

“Maj-Britt Landin, the executive producer at TV2, has become one of my very close friends and she was the one I would feed off. We’d go for walks and we’d discuss my scenes. She wouldn’t force things upon me but she would bounce off me in a way that just made it right, and she was the only one who read the scripts.”

Filming took place across Copenhagen, with rural scenes shot close to Avaz’s hometown of Helsinge. He also travelled to the US to shoot scenes set in Colombia in New Mexico. Throughout, he employed a “David Fincher-esque” camera style that used minimal movement but also sought to break the conventions of traditional filming techniques. The style also shifts with the characters. “We spent a lot of time on the visual side. It’s not just point and shoot,” he says. “There were so many moments we were behind schedule, but we couldn’t just skip the ambition. We had to stay two hours extra just to commit to our visual style, which is sometimes really hard to say to people on a small budget.”

Alongside his writing and directing roles, Avaz was also constantly thinking about how best to use the DK28m (US$4.5m) budget. “That’s what kills you,” he says, “going to bed at night knowing you burned X amount of budget and, at the end of it, it’s my money taken out of my pocket if I make a choice that’s financially bad. That’s really hard sometimes.”

Alfa – which is distributed by ZDF Enterprises under the English title Grow – is about the power people have to change their lives if they’re unhappy. And if you can predict what’s going to happen at the end, “you may be the smartest person on Earth,” Avaz says.

“Further seasons are going to twist and turn in ways that haven’t been seen before. The idea for this season is to create a safe environment so that when the next season comes, you’re going to be like, ‘What the fuck?’ What you think is going on is not the main story.”