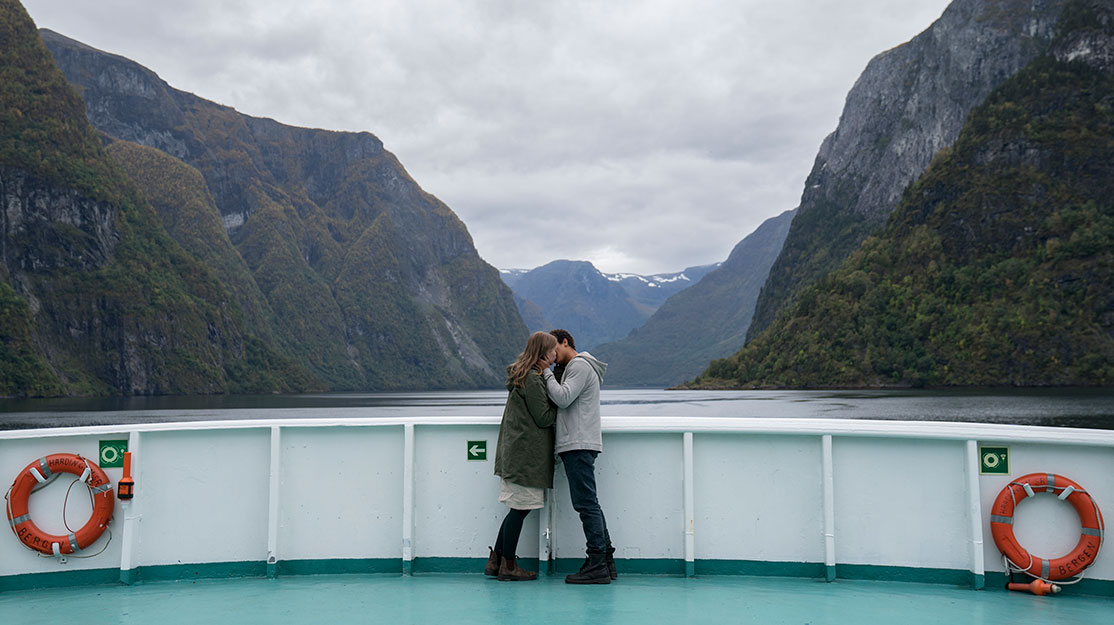 As breaks go, it doesn’t get much bigger than landing an eight-part series on Netflix. Yet that’s the route Hania Elkington and Simon Duric have taken into television, securing their first ever show with the global streaming platform.

The programme in question is The Innocents, an atmospheric, often dreamy and ethereal drama that plays out across contrasting backdrops – chaotic urban England and peaceful, secluded Norway.

Teenagers June (Sorcha Groundsell) and Harry (Percelle Ascott) run away together to escape their repressive families, only to discover June has the ability to shape-shift – the power, or curse, to adopt the image of anyone she touches. As the pair struggle to control June’s new power, a mysterious professor living in an isolated commune reveals she’s not alone.

The show was created and written by Elkington and Duric, who executive produce with Elaine Pyke, Charlie Pattinson and Willow Grylls of New Pictures and Farren Blackburn, who directed six of the eight episodes.

The writers first met when Elkington, a former agent, signed artist and filmmaker Duric to United Agents. They would often talk about projects, scripts and films they’d seen, and continued their friendship when Elkington left to become a full-time writer.

At that point, Duric was working on a story about a brother and sister pair who could turn into animals, while Elkington was developing a story about young love, featuring a female lead and a family full of secrets and lies. “So over several beers and several meetings, the ideas conjoined into one hybrid and we ended up co-creating the series,” Elkington says.

Rather than The Innocents being a purely supernatural show, however, the duo were always adamant that Harry and June’s budding romance should be at the heart of the story. Her ability to shape-shift would then be used to magnify the emotional stakes.

“We also felt shape-shifting really spoke to a young female lead, particularly in terms of transformation and questions like ‘who am I?’ and ‘where do I belong?’” Elkington says. “It also spoke to a bit of a fear about society at the minute, because we’re trying to tell a story about empathy and seeing the world literally through someone else’s eyes, breaking down boundaries, overcoming fear. All of those things felt like they could marry very well between the supernatural element and the family and emotional elements.”

The shape-shifting component was introduced after the writers uncovered information about the Bezerkers, a group of ‘bear warriors’ from Norse mythology who were said to transform themselves in the fury of battle. “We thought, ‘What if we allow that dormant DNA to resurge only in women and tell a modern, emotional, empathetic story with it and really turn that on its head?’” Elkington says. “A few elements really came together in an interesting way.”

Duric and Elkington spent six months developing the show themselves before they took it to market, working on the premise of a series with teen leads and a multi-generational cast around them. “We wanted to really nail down the world of the series and have a first script that felt in good shape before we went out, just so it didn’t get messed around too much,” Elkington says.

New Pictures wasted little time in snapping up the project, something Duric admits was incredibly bold of the company, which is best known for fellow UK dramas The Missing, Rellik, Indian Summers and Requiem.

“To make a show like this in this country, we don’t do it very often,” he notes. “I can’t think of anything past [Jack Thorne’s 2011 series] The Fades, really.”

Netflix – which has built its own roster of original genre series with shows including The OA, Dark, Stranger Things and The Rain – then picked up the series, which debuts tomorrow. “They facilitated us in terms of story to make the best version of the show we wanted to make,” Elkington says of working with the streamer, recalling a five-hour phone conversation with Netflix executives before they greenlit the show. “They were not at all interfering but they were very attentive and they really invested. They were encyclopaedic about it. They knew every character inside out, every plot twist we’d put into it, and they really collaborated with us on it.”

Duric calls Elkington a “kindred spirit,” though the pair don’t consider themselves co-writers in the traditional sense. Once the story and episode details were set in a writers room that also included Kim Varvell, head of development at New Pictures, and script editor Imogen O’Sullivan, they would write scripts individually. “We wouldn’t necessarily consider ourselves a writing team in general but it’s been an amazing collaboration working on this and we hope there’s a chance to do further series,” Elkington says. “Our two brains are so different and our tastes and inspirations are so different that we’ve created quite an unusual mix, an unusual tone.”

In the show, June and Harry’s journey takes them from their Yorkshire home to London. The story is also interspersed with scenes from a picturesque Norwegian location that is home to Sanctum, the collective run by Halvorson (Guy Pearce), a mysterious doctor studying other shape-shifters like June. The locations and camera work from lead director Blackburn and DOP David Procter are enhanced by Carly Paradis’s enchanting soundtrack, which helps to create the fragile, otherworldly tone of the series.

Duric describes the Norway-set scenes as being like a “Scandi western,” with a slightly vintage design and wide open spaces. There are also echoes of Nordic noir, although there’s nothing nearly as dark as the sinister skylines on show in Forbrydelsen (The Killing) or Bron/Broen (The Bridge).

“The greatest inspiration we took from Nordic noir was the gallows humour of Steiner [Jóhannes Haukur Jóhannesson] and Alf [Trond Fausa], our bounty hunters and mindless thugs who actually have this quite ‘odd couple’ relationship, with moments of humour and moments of real humanity,” Elkington says. “That’s something that owes a debt to Scandi drama. Otherwise, we were very lucky to be in those locations but we did want to do something different and not just give the audience something they had previously enjoyed.”

Duric and Elkington enjoyed the collaboration with Blackburn, Procter, fellow director Jamie Donnaughue and producer Chris Croucher, and were particularly involved in the casting, location scouting and editing.

Casting involved watching tapes of up to 500 Junes and 500 Harrys, whittled down from the thousands of auditions by casting director Daniel Edwards. “It was exhausting at times, but always thrilling and exciting,” Duric admits. “There are so many good young actors out there that it’s insane, but you just watch them and hope to get that feeling in your stomach – the feeling Hania and I had when we started to create the characters. And with Sorcha and Percelle, it came quickly.”

Elkington adds: “Sometimes the way they played it surprised us, and that was amazing. They really got their teeth into the roles on the page and really elevated them with their performance.”

While “biblical” rain that turned Sanctum into a Norse version of the traditionally soggy Glastonbury Festival posed difficulties during filming, the biggest challenge from a writing perspective was keeping Harry and June’s story at the front of the drama from script to production – particularly with June spending large portions of several episodes in someone else’s body.

To enhance the emotional storyline, they decided that June’s reflection would still show her true identity after shape-shifting, with Harry continuing to hear her real voice. Elkington admits that took some orchestration during production, but it’s a concept that provides a haunting, ghostly element throughout.

VFX studios Lexhag and Jellyfish were also on hand to blend the performances of two actors portraying a shift – June adopting the other person’s body while the original character lays rigid on the floor, eyes wide open and rolling in their sockets, as if their soul is being sucked out.

“We talked to Chris and Farren about how we imagined it feeling and the emotional triggers, the shaking, the eyes and the sudden muscle spasms. But in terms of the mechanics of the shifting itself, it’s a hard one to explain until you get into that process,” Duric notes. “There’s a lot of to and fro but, ultimately, we got what we wanted, which was a very physical, real emotional experience as opposed to anything too body-horror or ghastly.”

The series’ transformation theme is present on multiple levels, from Harry and June’s romance and their relationship with those around them, to June’s physical being. But it’s the love story that comes first. “Those themes of love are hopefully universal, and I think we take genre and have tried to naturalise it into an epic family drama. We’re hoping the two can exist side by side without seeing the join – and if that can work for an audience, it will take them to a space they haven’t been in many times before,” Elkington concludes, promising a “gut punch” at the end for viewers who watch all eight episodes.

“That’s my hope, and it will leave them clamouring for more. I think it’s the kind of show where the more you watch, the more it rewards. I hope people stick with it.”