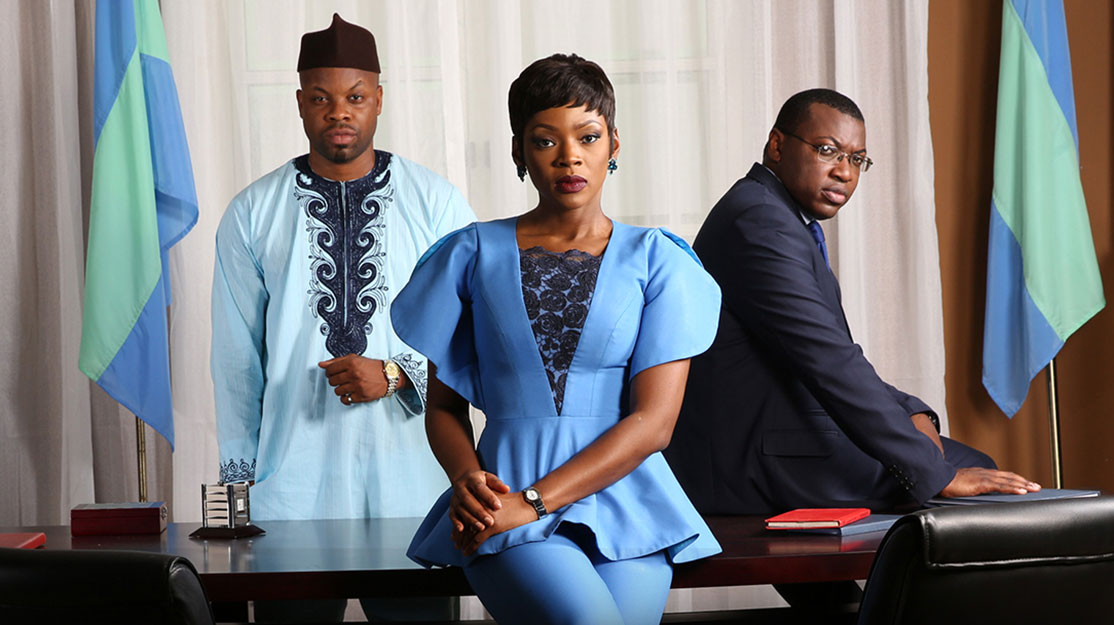 Three producers from across Africa tell DQ about their upcoming television drama plans, the stories they want to tell and the challenges they face bringing them to the screen.

The show, set in Dakar, comes from Senegal’s Keewu Production and Canal+ International and is produced for Canal+ Africa. It is due to air at the end of 2018.

“It’s about two cops investigating different cases, and the more cases they investigate, the more it becomes supernatural,” Herbulot tells DQ during Série Series in Fontainebleau, France. “You start the first episode and it’s a procedural. But as it goes on, it becomes more weird.”

At first, the project was “very local, very African,” the showrunner says. But after Herbulot came on board, he sought to turn the show into something that reflected Africa but would also play around the world.

“The challenge was first of all to shoot it and then convince people this is a local project done to speak to the Senegalese but also to speak to the entire world and bring a new standard for African series, which was my main battle,” explains Herbulot, who has directed episodes of French series Falco and Moroccan drama Ghoul. “With all the TV series around the world, you cannot say we have an African series. We are doing something new and it has to look as Western as it can in terms of standards. After that, it has to be special enough to show what an African series about cops is, because no one has done that yet at that level.”

Herbulot took inspiration from the Korean movie business, which he says has taken Western filmmaking standards and combined them with local themes. “I said to our producer that this was exactly what we should do. The form should look like any US or European series but inside it must be African,” he continues. “When you have, for example, a manager and his employee, the manager can slap the other one. That’s in the culture because there is a respect. Between two cops, especially since one is older and the other is young, you can also have this energy and interaction that you don’t have in Europe. You would never see an old cop in Europe slapping someone else and saying, ‘Do your job.’ These kinds of details, you only know when you live in Africa.”

Congo-born Herbulot says the African content industry is currently in the midst of a “creative gold rush,” where viewers are watching content from around the world and wanting to see their own lives and stories on screen.

“You can do whatever you want – the only limit is the people you work with and the people paying for it,” he explains. “But since they don’t know yet what African audiences want, we can try whatever we want. This is a police procedural, but we could do sci-fi. I’ve been working in France and the US; I know these markets and there are other great things we can do there, but there is nothing like Africa as a writer, director or showrunner.”

Nigeria
In the last five years, EbonyLife has established itself as a major player among African broadcasters, with services ranging from linear channel EbonyLife TV and movie division EbonyLife Films to its pan-Africa VoD service EbonyLife ON, which launched earlier this year.

In July, the company also unveiled what it says is Africa’s first legal drama, Castle & Castle, which stars Dakore Egbuson-Akande and Richard Mofe-Damijo as married lawyers Remi and Tega Castle, who run a successful practice in Nigerian city Lagos. The show sees their relationship put to the test as family issues clash with their working life, leading to questions over their future together.

Castle & Castle is the latest original drama from EbonyLife, following in the footsteps of political series The Governor (pictured top) and Sons of the Caliphate; Dowry, about feuding families; and Fifty, which is based on the EbonyLife original movie of the same name and continues the story of four women facing mid-life changes.

That leads to EbonyLife Studios, one of the biggest sections of the company, which in March announced a scripted television development deal with Sony Pictures Television. The agreement will see them co-develop three new dramas, with the first inspired by the real-life all-female military regiment known as the Dahomey Warriors. The action series is based on events that took place in the West African Kingdom of Dahomey and will tell the story of the women who came together to protect and honour their people.

Mo Abudu, EbonyLife’s founder, CEO and executive producer, says the Dahomey Warriors project is her company’s biggest to date, with plans to use it as a calling card for the types of stories and big-scale productions she wants to build.

“People look at our content and say, ‘Is it really made in Nigeria?’ Good content can come out of Nigeria and we are evidence and proof that it can,” Abudu asserts. “We believe we have a treasure trove of stories that have never been told. The Dahomey Warriors story is one of so many.”

Abudu says EbonyLife has taken the time to research and develop a slate of drama series, which means the network is “a little ahead of the curve.” She continues: “This market is wide open. Africa is very talented and I keep saying to anyone who cares to listen, whether a writer or producer from Nigeria or the rest of Africa, that this is our time – but we have to put the work in. We have to do the research. We have to make sure we write well so our stories can travel and can be easily shared and understood by a global audience.”

The box office success of Marvel blockbuster Black Panther has certainly increased the focus on drama coming out of Africa. Indeed, many comparisons were made between that film and the Dahomey Warriors project when the latter was first announced. Abudu says this is just a coincidence, however, with the series having been in development for more than three years.

“It’s the world obviously saying it is time for these authentic African stories,” she says. “Sometimes you find the black stories that come out of America, outside of Black Panther, tend to focus a lot on the slave trade. But there’s more to Africa than the fact Africans were taken as slaves. I’m not saying it’s not a big part of our history, but we experience the same everyday realities as the rest of the world. When we create a piece of content like [movie] The Wedding Party, it’s just about someone getting married. We want to make authentic, historical, high-concept stories. But that’s not to say we can’t also do [shows about] the mundane things in our lives.”

Abudu adds that she wants to develop series in a range of genres, including one she calls ‘Afro-futurism.’ One project on EbonyLife’s slate is a sci-fi series called Nigeria 2099. “We’re open for business,” she adds. “We’ve done the research, done the writing, done the development, and this is really a call to the big studios to say if you want an African partner, we’re right here. We’re ready to be your partner.”

South Africa
Johannesburg-based prodco The Bomb Shelter currently has two daily dramas on MNet’s Mzansi Magic channel. Isibaya follows the violent clashes between different factions of the taxi industry in rural KwaZulu-Natal, while Isithembiso is a coming-of-age drama about new university students leaving home for the first time, finding love and confronting the obstacles of growing up.

The company also recently finished a further pair of 13-part dramas for MNet. Nkululeko is a story about three boys and their dreams of escaping poverty in Cape Town and Ayeye! is described as ‘Entourage in Johannesburg,’ following three men working in the advertising industry.

The Bomb Shelter was formed 21 years ago, when filmmakers Desiree Markgraaff, Angus Gibson and Teboho Mahlatsi came together to tell authentic South African stories that had not appeared on mainstream TV before.

“Television in South Africa had been apartheid-dominated, so the kind of TV that was made for black people was incredibly censored and sanitised,” Markgraaff explains. “We were keen to tell stories that felt authentic and started to tell the real stories of South Africans. The first show we did was Yizo Yizo for SABC, which was set in a school and tackled the challenges facing education in the post-apartheid era. It was iconic because it was the first time you saw young black South Africans in a meaningful story on television that was really reflecting their lives.”

Pan-African series Jacob’s Cross, meanwhile, ran for eight seasons, looking at the relationship between South Africa and the rest of the continent. It epitomised The Bomb Shelter’s aspirations to shift the focus of Africa away from “despots, corruption, children with flies around their nose, HIV or AIDS” and tell the story of the people fighting to rebuild the region. “Of course, there are issues of poverty, war and corruption. These are massive issues. But when you live here, there are many other things too, and they don’t get the same amount of screen time,” Markgraaff says. “For people living away from home, their memories are not what they see in Western media, so we were trying to find those things you long for.”

The Bomb Shelter focuses on family dramas over genres such as horror or comedy. Oscar-winner Lupita Nyong’o’s first lead role was in a series produced by the company for MTV Networks Africa called Sugah, a youth drama set in Nairobi.

The prodco is now developing what Mastgraaff says is its most ambitious project to date. Shaka will retell the story of the eponymous Zulu warrior who built what became known as the Zulu nation and amassed an army of more than 70,000 fighters. A multi-season series is in development, with The Bomb Shelter likening it to Vikings or Game of Thrones, though with fewer fantasy elements. MNet is onboard as a partner broadcaster.

“There hasn’t been anything like this made ever, so this really is the beginning of a slate we want to do called ‘When We Were Kings.’ We’re looking to tell stories of kings, queens and communities that existed before colonisation. So much of our history is framed in the context of colonisation – we’re interested in telling stories that predate that,” Markgraaff says. Pre-production is expected to start in early 2019, with shooting later next year and the series on air in 2020.

“There are great stories in Africa and while in the past there was a resistance to African content, things are changing. One can’t ignore the Wakanda effect,” Markgraaff adds, referring to the futuristic city depicted in Marvel’s Black Panther. “We’re excited to see whether that will translate into the television landscape and make the same epic series people want to watch that are being made elsewhere.”