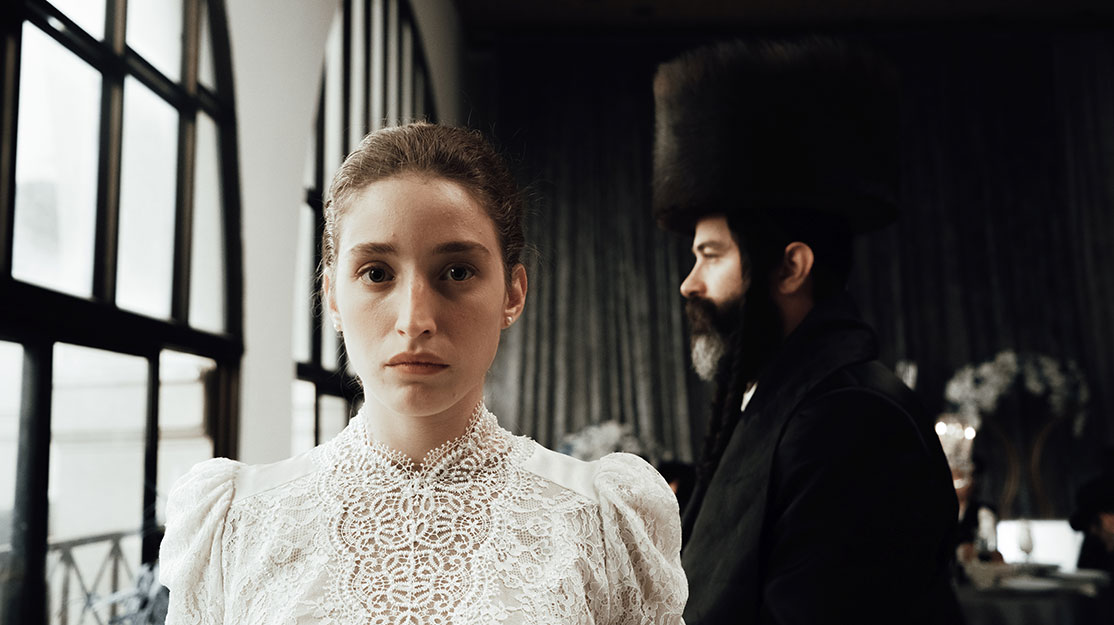 Adding fuel to the Fire

Filmmaker Rama Burshtein-Shai makes the move to TV with her debut series Fire Dance. She tells DQ how the series explores the theme of forbidden love between a troubled young woman and a married man.

Writer and director Rama Burshtein-Shai made her film debut in 2012 with Fill the Void, the story of an 18-year-old woman from an ultra-Orthodox Jewish community who is pressured to marry her older sister’s widower. The New York-born filmmaker is herself ultra-Orthodox and the film was praised for its intimate and sensitive handling of its subject matter.

A decade later, Burshtein-Shai is now making her television debut with an eight-part Hebrew-language series that blends coming-of-age drama with a tale of forbidden love.

Fire Dance follows 18-year-old Faigie, who grew up in a broken home and without a father figure. After a failed suicide attempt, the troubled young woman finds a connection with Nathan, the 35-year-old married son of the leader of the ultra-Orthodox community in which they both live.

“TV is the thing now,” Burshtein-Shai tells DQ about her move to the small screen. “It’s a different way of thinking and, for me, cinema would be [like writing] poetry now after you make a show and you go deep into character and side stories. I love that. I need that space – I didn’t even know I needed that space but, once I had it, I knew this was what I wanted to do.”

But despite the extra running time – Fire Dance’s eight episodes run to around 50 minutes each – she says her approach to the project didn’t change dramatically from the way she has made her feature films.

“I still feel cinema people are more respected in a way, in terms of art, but it’s changing,” she says. “When I did my films, I had more days to shoot. In Israel, it’s very low-budget, everything’s very low-budget, so I had more days to shoot when I did films. But it [a series] is a long movie, it’s a long film. You’ve got to know where you cut in terms of teasing your audience to continue [to the next episode] but, for me, it’s cinema, it’s the same.”

Low budgets and packed production schedules are common obstacles facing Israeli creatives, but Burshtein-Shai says: “I’m a believer, so they’re just another ingredient in my cake.” As for Fire Dance, “It’s beautifully shot. You would never believe it was a five-day shoot for each episode,” she says. “You have very little time so you really have to feel it. You have your characters and your colours and what they’re wearing, and this is all you have, and yet you can do beautiful things. You don’t trust the money, you trust your heart and your work and your team. I love that.

“I never did anything that had money, so I don’t have the experience of having it. We’re used to it. I feel it makes you very precise, very concentrated – you know what you need. I do a lot of rehearsals because we don’t have time. My work is always about the relationships, the actors and the way they talk, so we do a lot of rehearsals. We have fewer days of shooting and more rehearsals just to get there. And we did.”

Coming 10 years after Fill the Void,  Fire Dance is different “because I’m different – I’m more daring,” Burshtein-Shai says. The story is set in the same world as her films – her world. She pitches the series as passion versus satisfaction, asking which you would opt for if you could choose only one.

In the opening episode, we meet Faigie, a woman clearly struggling with life – best exemplified by the abuse she suffers at the hands of her mother – and it is the charismatic Nathan who starts to bring her out of herself as she decides to open up to life’s possibilities. “That’s how things get very complicated and get mixed up with feelings,” Burshtein-Shai says. “Then she goes through an amazing process. She totally changes, but it’s about passion. It’s about what you do with passion. Nobody teaches us what to do. Do we grab what we’re passionate for, which usually breaks our home or complicates things, or we decide not to feel and not to get into dangerous places?

“Passion is an inspiration. And satisfaction, which is the opposite of passion, is in a way killing the thing we’re running after. We’re running after passion. Passion is the fuel. So this is the discussion told through this relationship with this young girl and this very charismatic rabbi.”

After her failed suicide attempt, it’s understandable that Faigie is at rock bottom and is dealing with the weight of her childhood growing up in difficult circumstances. But the opening scene of Fire Dance, where Faigie is a bride two years in the future, gives viewers hope she will find happiness in life. The questions the series will answer are how did she get there and who is she marrying?

“She’s going to win it, she’s going to change, the question is how,” Burshtein-Shai says. “Does she marry Nathan even though she’s already married? I don’t know! This is the show. Do they go for it? Do they go with this thing that develops between them or not? But one thing is for sure: Faigie changes. She goes through an amazing process and becomes this very powerful, beautiful woman.”

In that first scene, the filmmaker also takes inspiration from one of her favourite directors, Quentin Tarantino. “He actually sells you hope,” she says of the Pulp Fiction director. “The only thing is that to find hope, you have to go through hell. Good guys always win, but it’s through hell.”

Burshtein-Shai likens Faigie’s affection for Nathan to a patient who falls in love with their therapist. The complications in the series then arise from whether Faigie will act on that passion, even if it’s not the right thing to do.

“I’m the kind of person who, when I feel passion, it’s very hard for me not to go with it,” she admits. “It’s something I’m totally drawn to. The complication is not so much about the relationship in terms of will they or won’t they, it’s what she will do with all these things she feels for him. Will it end with marriage or will it not? Who is she going to marry? This is the outcome of the show.”

As the story is told from Faigie’s perspective, Nathan is a character who will always seem slightly out of reach to viewers, just as he may be to Faigie herself.

“He’s going to always be someone you don’t fully understand. Sometimes you feel he’s playing with her, sometimes you will feel he has nothing with her. That’s the game of passion. You don’t really know,” the director says. “He’s a teacher. Even in the first episode, he just wants to know she knows there’s a way to solve it [her problems]. It’s a beginning and he knows how to play with that. You would sometimes say he’s right and then sometimes say he’s playing a dangerous game. That’s the fire dance, that’s how you dance with fire.”

That the story is set within an ultra-Orthodox community mirrors Burshtein-Shai’s previous work, but she says the theme of forbidden love at its heart is universal no matter where it takes place.

When she comes to a new project, Burshtein-Shai wants to put viewers front and centre, but not give them what they want. Instead, she wants them to understand what she wants to say with a particular story. When she writes and directs, it’s her way of connecting with the world. That’s also why she can’t imagine directing something she didn’t write, and she doesn’t know anyone who could direct her screenplays.

Produced by Yes TV and Kuma Studios for broadcaster Yes, Fire Dance stars Mia Ivrin as Faigie and Yehuda Levi as Nathan. Both actors spent time with Burshtein-Shai during three months of rehearsals, talking about their characters and, most importantly, emotions and matters of the heart.

“It’s about finding the essence of that feeling in your heart, feeling it and just talking through it,” she says of working with her cast. “We talk mostly about the heart, about feelings. Hate is different from jealousy and jealousy is different from despair, and you need to know that. It sometimes looks like a documentary because of that. They just know what they feel, not what they have to do and not where they have to go. I find that it’s powerful. This is what we do. We have the best time talking about our hearts and feelings.”

Fire Dance was filmed at Tiberias, on the banks of the Sea of Galilee, for around three weeks, before the production moved to the city of Tel Aviv. The “beautiful” look of Tiberias, an important religious site, is backed by a jazz and synth-inspired soundtrack provided by musician Daniel Zamir.

Music is a key part of the creative process for Burshtein-Shai, who had Zamir in place before casting her main actors. Zamir, she says, “is amazing, he’s a genius. He understood the heart beating in this work. Just from reading it, he started doing the music. He didn’t wait for the shoot, he was there. The music is very strong and sometimes it’s synthesisers and sometimes it’s very different. There are a lot of songs with words during the show; almost every episode has a song. It’s amazing to work with him.”

“I’m definitely into giving hope,” she says. “I came to give something and what I give is hope and power to change and do, and to be able to change all the time. I hope they’ll feel that.”

As for her own future, Burshtein-Shai definitely sees herself continuing in television.

“Everyone is afraid to say it but I can say it: I think cinema is dying, in a way,” she says. “Either people want TikTok, a 60-second thing, or a life story. In between, the hour-and-a-half, is not strong enough anymore.”