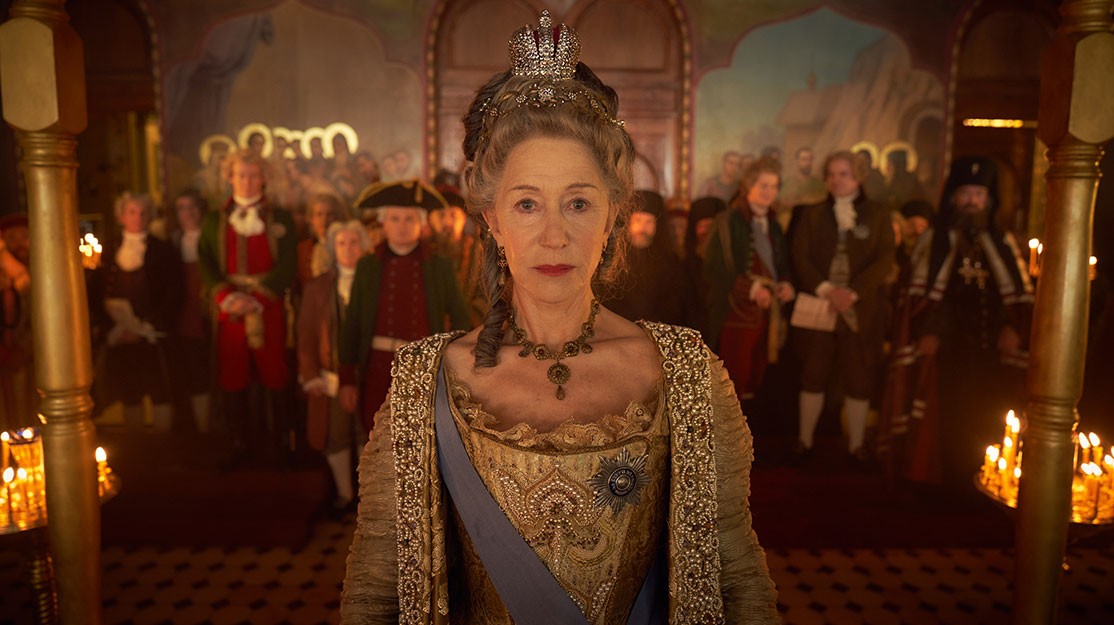 Dame Helen Mirren is no stranger to portraying royalty on screen. But as she reveals, it was after an off-the-cuff remark that she found herself playing the title role in Sky and HBO miniseries Catherine the Great.

It takes a special actor to play one of the greatest and longest-reigning monarchs in history, and a vast, experienced cast and crew to support her.

Dame Helen Mirren is at her imperious best as the titular Russian empress in four-parter Catherine the Great. A combination of heavyweight co-stars and lavish production values and locations help to tell the story to startling effect.

The miniseries – the third in HBO and Sky Atlantic’s global partnership after The Young Pope and Chernobyl – is produced by Origin Pictures and New Pictures and was filmed largely in Lithuania and Latvia, where existing buildings were taken over to recreate 18th century Russian palaces and offices as well as Catherine’s apartment.

The production also gained access to several real palaces, including the Catherine Palace in St Petersburg, which – combined with a big-budget costume department – helped Mirren get into character.

“We shot mostly in Lithuania but we also had the incredible privilege and advantage of shooting in Catherine’s palace in Russia,” she says. “And really, it did make such a difference. Of course, one can get into character in a studio, but to stand in those rooms that Catherine stood in, wearing those dresses, was an amazing experience. I do love a big dress, I must say! I’ve never got over my six-year-old self’s love of dressing up.

“Every now and again, in between takes, I would go wandering off so that I could just be alone in a room and think and feel. Oh my God, to look out of a window I knew she’d looked out of – that’s unbeatable.

“The palaces were actually destroyed in the Second World War, but the Russians did an amazing job of restoring them, and that is one of the great privileges of this job – to spend time really investing in a role.”

Catherine the Great’s story focuses on the later years of Catherine’s life, in which she ruled Russia alone after a coup in 1762 that led to the death of her bullying and drunken husband, Emperor Peter III. German by birth, Catherine became one of Russia’s longest-reigning monarchs, ruling as empress until 1796 and never remarrying.

“It would have been wonderful to have played the whole arc of her life but, of course, you can’t because you’d have to do it with two different actresses,” Mirren says. “At my end of life, we had to explore the latter end of her life.

“But that was the period in her life when she truly became ‘the Great’ when it came to extending the Russian empire, and the way she managed her power, so actually that worked out well.”

The series came about after Mirren was asked in an interview whom she would like to play next and – partly because of a lack of anything else to say, and partly because she had genuinely read up a lot on her life – found herself naming Catherine the Great.

Producer David Johnson saw the quote and immediately set about creating the project with scripts from Nigel Williams, who previously worked with Mirren on two-part miniseries Elizabeth I in 2005.

Mirren was surprised but thrilled to find herself being offered the role after such a flippant comment. She says: “I’m half Russian so I have always been curious about Catherine and, of course, any women in history who have had extraordinary lives, who have experienced enormous success, who have been powerful, obviously they are going to be interesting roles to play. So there was always a fascination for me.

“I very rarely have an answer when people ask me what role I’d like to play, because often the best roles are the ones that take you by surprise. But I did foolishly say Catherine the Great, and my dear producer rushed off to get the deal done, which completely took me by surprise. You have to be careful what you wish for. Next time I will answer, ‘I don’t know!’”

Catherine had many detractors, including her own son, Paul, who tried to denigrate her with false rumours about a voracious sexual appetite for not just men but also horses. Yet most historians believe Catherine had only a few partners, with whom she was entirely monogamous, and the series focuses particularly on her long relationship with Grigory Potemkin (played by Australian actor Jason Clarke), her right-hand military man.

As Potemkin was very often on the battlefield, their relationship was carried out through many love letters, which still exist today.

“I did do research,” says Mirren. “You can’t go into a role like this without reading up on the history. I read her books, they’re all on my mantlepiece – six very thick tomes.

“But the most valuable was just a sense of her life and her personality through reading her letters, though not all of them, as she was an incredibly prolific letter writer. They are very readable. The language is not dense.

“What was great to see was that Catherine had good wit and liked to have a laugh, which we tried to show at moments in the series. She wasn’t an uptight person and you can feel this through her letters, where there is a wonderful immediacy.

“They’re funny and full of observations about life that means in some ways you can almost read them as if they were written by a contemporary woman. Catherine was certainly a figure who was ahead of her time, so I think it was important to bring this to the role.”

Indeed, many of the scenes in the series, distributed by Sky Vision, show Catherine being flirty, cheeky or simply frivolous, especially during the dinner parties and balls she was so fond of throwing. Going by the tone of the letters, Williams managed to recreate a stye of talking that was not too fussy despite the period nature of the piece.

“I loved Nigel’s work on Elizabeth I and I think he’s a brilliant writer of period dialogue,” says Mirren. “He makes the language formal but very speakable.”

But beyond the light-hearted nature of her social life, Catherine is also seen as a fierce leader, and a liberal one: she wanted to reform the country and was a a patron of the arts, literature and education. Her art collection now forms the basis of the Hermitage Museum in St Petersburg.

Having played two British monarchs previously (as the title character in miniseries Elizabeth I and winning an Oscar for portraying Queen Elizabeth II in The Queen), how does this one compare? “They don’t compare!” the actor insists. “I felt there was a similarity between Elizabeth I and Elizabeth II in that they both felt pre-ordained for this role. The present Queen feels in her heart, I think, that God put her there and therefore she has a responsibility to God to fulfil this role. I think she and Elizabeth I had a great deal in common in that they both had that same attitude and feeling.

“I don’t think Catherine felt like that. Like Elizabeth I, she lived a very long life in an unbelievably precarious situation always. She managed always to negotiate and manoeuvre, when at any moment she could have been deposed and executed.

“But she took the throne, she wasn’t given it. And I think she took it because she knew that she, above all the people she saw around her, had the capabilities and the energy and the politics.

“In a sense, she was more like Winston Churchill, before the Second World War, knowing he was the only one who had the heart to do this thing. She was a masterful politician. I hope her legacy is that she was an extraordinary leader.”