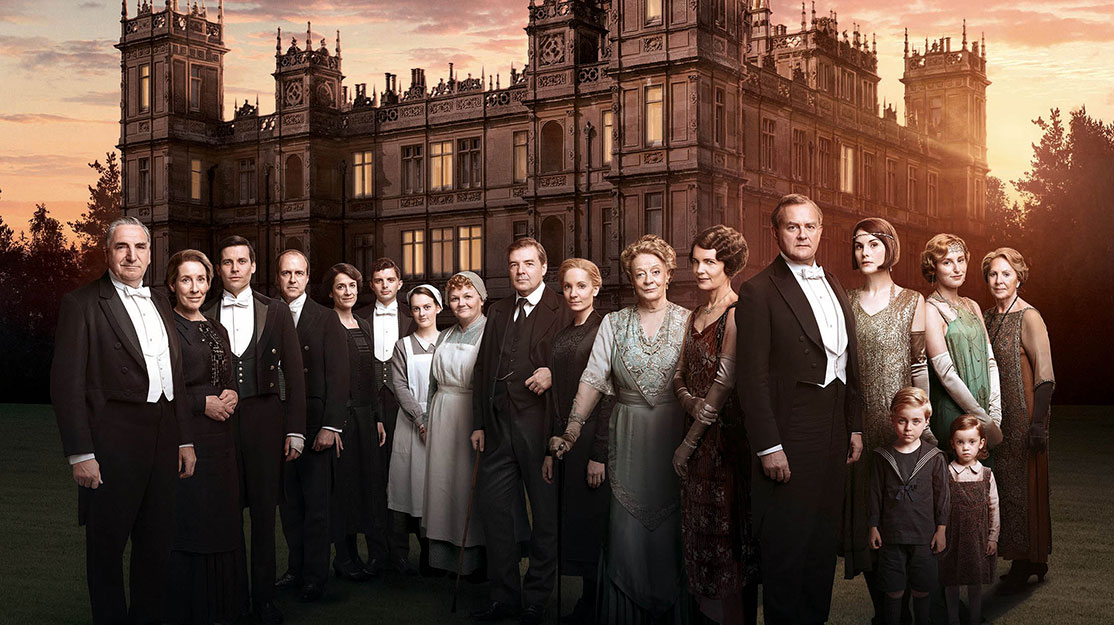 With two new shows in the works, Downton Abbey writer Julian Fellowes and executive producer Gareth Neame look back on the period drama’s success and discuss their partnership.

Remember a little show called Downton Abbey? It’s hard to shake off the memory of a series that captured the hearts of audiences across 250 countries, picked up 12 Emmys and somehow got the average viewer interested in 20th century British social hierarchy.

Over the six years and six seasons that viewers followed the Crawleys’ lives, the series was a ratings smash hit and a gold mine for the broadcasters that brought it to our screens. In the UK, Downton reached an average of 11 million viewers over the duration of the series, while on PBS’s Masterpiece in the US it became most viewed drama of the past 45 years and reached an average of 13.3 million viewers per week at its peak.

However, for the brains behind the project – creator Julian Fellowes and executive producer Gareth Neame – there was an element of luck in getting the show off the ground.

“We were very fortunate that [former ITV director of television] Peter Fincham really believed in it despite everyone telling him he was mad, that the audience for period drama was dead and there was no one there to watch it,” states Fellowes, speaking at Content London at the end of last year. “There was something in it that just spoke to him. I love that because it’s nice when people are brave and go out on a limb and get rewarded.”

Neame, the executive chairman of Downton producer Carnival Films, is grateful to ITV for taking a chance on the show despite the broadcaster being in the midst of a difficult period when it was first commissioned. “Fortunately for us, they embraced it as soon as they saw the idea,” he says. “It was the middle of the advertising recession following the global crash and they had almost no money to buy new drama, but they committed to doing this, fortunately for us, and it all happened quickly.”

The exec producer admits he and Fellowes were caught slightly off guard by the show’s immediate success as they saw it spread across the globe, amassing devoted viewers along the way. A greater surprise came when the first season won four Emmys, including the Outstanding Limited Series prize.

“We were there at the Emmys the first year and there’s no denying that, of the 3,000 to 4,000 people in that theatre, very few had actually heard of the show until it started to win all these awards,” Neame reveals.

“We were sort of warned that we wouldn’t win that year – ‘You mustn’t be disappointed, it’s marvellous to be nominated’ – and then we won practically everything!” Fellowes adds.

Critical acclaim continued and the series went from strength to strength each season. And as the show evolved, so too did Fellowes’ writing, with the Downton creator finding himself adapting the scripts according to the cast.

“The actors do change the writing  – not what they ask for or suggest, but simply you write [according] to their performances because you start to see their strengths and begin to understand what they will do best,” he explains. “Obviously, you try to make opportunities in which they will shine their brightest.”

The writing was also influenced by the fans, as Neame explains:  “We started to have very similar opinions to the fans. There were never any original plans to have Mr Carson [Jim Carter] marry Mrs Hughes [Phyllis Logan] – that was Julian responding to the chemistry those two actors had.

“So we were thinking the same thing the fans were thinking, that there was a great chemistry and it had to happen. There were many examples like that, and that’s what makes it all so fun – the inventions coming from all sorts of different places.”

As is often the case when a hit drama series comes to an end, viewers started asking about a possible feature-length adaptation of Downton, eager to see the Crawleys and co on the silver screen following the TV finale in 2015. Fellowes initially dismissed the idea, as he felt they had been able to tie all loose ends together and give the series a worthy send-off.

“I felt when I’d written the end, I’d made everyone as happy as I could,” he says. “We said goodbye and I thought it was goodbye. We all went to the Ivy Club and we cried and drank champagne and, as far as I was concerned, we’d come to the end of the road. But no, and gradually over the next year or two, the idea of a film took root and I finally came to see that it was going to happen.”

The plans finally came to fruition last year when the long-awaited Downton Abbey film hit cinemas across the globe, four years after the series’ conclusion.

“We didn’t want the show to go stale and wanted to quit while we were ahead. Having the possibility of the film sweetened the pill for the millions of fans around the world who didn’t want it to end and who really loved those characters. The idea that they weren’t lost forever was definitely positive,” says Neame.

The exec producer adds that while “it wasn’t a massive leap to take it to the big screen,” there were still obstacles to be overcome, particularly in ensuring the show’s stars were fully on board with the project.

“There were a lot of challenges in getting all of the cast back. Everyone had a sense they wanted to do it, but that’s not quite the same as saying you are going to commit,” he says. “Getting everyone to make that commitment did take an awful lot of work, but I was pretty determined to do it.”

That desire to get the film off the ground paid dividends, with the Downton movie grossing more than US$190m globally, making it Focus Features’ second highest-earning film ever. Does this now mean Downton devotees can expect a second feature-length instalment?

“We said at the time we launched the film that we would like to keep going with it if it works, and fortunately, it has worked. The actors enjoyed doing it. So hopefully we’ll find a way to come back for more,” Neame teases.

“We’ve done it once, so I suppose we can do it again,” adds Fellowes, although nothing concrete is in the works at present.

Since the show’s conclusion, Fellowes and Neame have busied themselves with a number of different projects, including working together on two new period dramas: ITV and Epix copro Belgravia and HBO’s The Gilded Age.

Premiering this month, the former is based on Fellowes’ novel of the same name and follows the lives of the nouveau riche Trenchard family and the aristocratic Brockenhurst dynasty. For Neame, the decision to adapt the work to the screen was a no-brainer.

“When I read it, I thought it was fairly obvious that we should turn it into television. If I didn’t, there was going to be a queue of people who would want it,” he says.

Fellowes says the new projects have benefited from the fact the creative duo have honed their working relationship over the years, enabling them to work more swiftly.

“I’m pleased with the way Belgravia turned out. Obviously Gareth and I have now made quite a lot of television, so in certain areas we have developed a kind of shorthand. It doesn’t mean we always agree, by any means, but we don’t waste time trying to find out what the other one thinks, because it’s pretty clear what they think. It makes it quicker and easier.”

The Gilded Age, meanwhile, is set in the boom years of 1880s New York as the city experiences an influx of wealth and the establishment of a new bourgeois class. At first glance, it looks to be in a similar vein to Downton, but Fellowes is quick to point out the differences between the projects.

“Downton was quite deliberately the dramatisation of what was bound to be the decline in power of the British upper classes,” he explains, “whereas in Gilded Age, they’re going full steam ahead, they’re right in the middle of it. In fact, they haven’t yet reached their golden years, it’s still pouring in, and that seems a different dynamic and rather fun to approach.”

The new shows represent further additions to the period drama genre with which Fellowes has become synonymous, but being chiefly associated with historical series doesn’t bother the writer. “I seem to have become someone who does period drama,” he admits. “I don’t feel particularly committed to doing period drama but, on the other hand, when doors open for you, you’ve got to go through them. Usually you have to get known for doing something to then try to build on that and do slightly different things.”

Like many other major players in the industry, both Neame and Fellowes have found themselves getting into bed with Netflix. Neame, who is working with the streamer on ongoing historical drama The Last Kingdom, says: “It’s really been an excellent experience. Every creative wants to be completely supported and feel that encouragement when you deliver the episodes, and that’s exactly what they’ve been.”

Fellowes’ project, meanwhile, is another period drama, but this time focusing on a somewhat surprising topic. Dramatising the origins of the modern version of football (soccer) in the late 1800s, The English Game will launch on Netflix later this month.

Described by Fellowes as “charming,” Netflix will surely be hoping Downton’s army of fans will be there for the show’s kick-off.