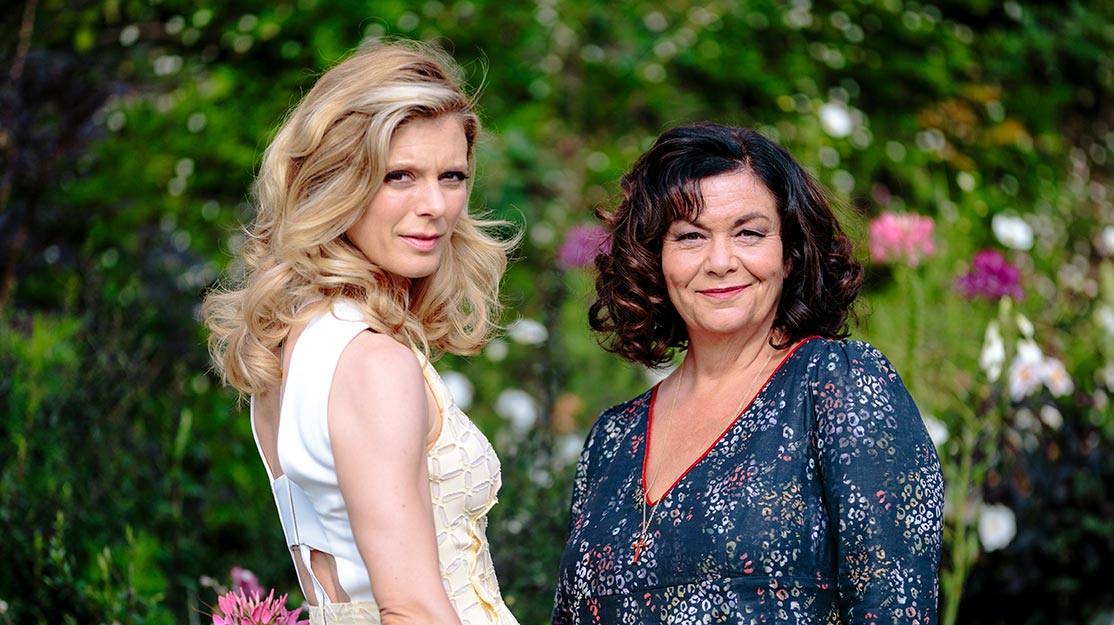 A taste of Delicious

Writing for DQ, Phillippa Giles, executive producer of Sky 1’s Delicious and MD of Endemol Shine UK prodco Bandit, discusses how the relationship series puts women front and centre – both in front and behind the camera.

“Show us as women with all our flaws. Show us in huge close-up.”

That challenge, issued by Delicious star Dawn French upon the drama’s conception and combined with the brief from Sky’s former head of drama Anne Mensah to push women to the foreground, has always informed the series.

The show, which concluded its third four-part season on Sky1 last week and is now available via the Sky Store, centres on two women, both former wives of the same man, but now, after his death, struggling to make the hotel he left behind a success in the middle of bucolic Cornwall.

French plays passionate cook Gina, who has inherited the Penrose hotel and restaurant together with the glamorous Sam (Emilia Fox), both of whom were once married to the deceased head chef Leo Vincent (Iain Glen). In season three, Gina and Sam’s business has been booming, their delicate friendship has lasted and they are on the lookout for a new protégé in the kitchen.

Delicious is that rare beast, a relationship show, but, even rarer, a relationship show revolving around four generations of women. The characters range from 85-year-old matriarch Mimi, played by veteran actor Sheila Hancock, to newcomer Tanya Reynolds as 22-year-old Theresa, with Gina and Sam bang in the middle. Putting Gina and Sam at the front of the series and subsequently all four generations was important to Sky right from commissioning the series. They didn’t want this to be ‘just another hotel show,’ and nor did I.

Sky has given us unrivalled support in allowing us to showcase women in front of and behind the camera in the last three seasons. We specifically look to discover new and up-and-coming women directors and writers for future seasons and hope, through the role-modelling on the crew, to bring on women in key trainee roles on camera and in sound, within the industry. Sometimes it takes a bit longer to fill these roles in a less traditional way, because the pool of talent is smaller due to the access to such positions, but the atmosphere fostered as a result is always worth the effort. There is a wealth of talented women out there waiting for their opportunity to show what they can do, and all it needs is the right project to attract them.

This season, original creator Dan Sefton, busy on other projects, was happy to pass on the baton to new lead writer Ursula Rani Sarma. Ursula and the all-female script team of Bandit head of development Muirinn Lane Kelly and script editor Ella Tayler Baron have ensured a number of things: that the sex (and it’s raunchy stuff) is not initiated by the men, that we talk about mastectomy as much as pregnancy and that we make sure there is a lot of wine-drinking, weed-smoking and skinny-dipping along the way.

Fun, both on and off set, is important to how Delicious works. With our female-heavy top tier of commissioning editor, commissioning exec, programme exec and producer, there is a family feel on set and both team and cast members are encouraged to bring their children along. In fact, one scene opens with a tracking shot past three young girls — the director’s daughter, the writer’s daughter and the composer’s daughter! The female bias percolates down through the crew with a woman boom swinger, camera assistant, art director as well as second and third ADs.

Director Robin Sheppard was our lead director this season and she quickly bought into the collaborative atmosphere Delicious fosters. Schedules, scripts, design and photography all benefit from the cross-disciplinary dialogue encouraged by the woman-centric subject matter and predominance of women on cast and crew. Even the traditional bastions of chauvinism on any film set – sparks and riggers – have bought into the family atmosphere of hard work without the hierarchy.

A key sequence for us this year was the string of scenes playing out Mimi’s fake wake, or ‘death party’ as it is referred to in the script. This sequence occupies a substantial chunk of the third episode as it is the culmination of a big story strand for Mimi, which builds to an emotional climax through the season as, originally, Mimi hides her cancerous breast lump, then reveals it to her step-granddaughter who is sworn to secrecy but who eventually forces her grandmother into the open about the fact she needs help.

Second director Amit Gupta, new to the show, was tasked with giving this set piece the hallmark Delicious feel of natural beauty and cornucopia. We were anxious to shoot it in an outdoor location, as al fresco eating and partying is very much part of the Cornwall scene, but was it practical to take on the elements over two days of shooting? In the end, a compromise was reached with the design team whereby we would shoot in Port Eliot’s beautiful walled gardens with a large Victorian greenhouse to dash into for rain cover. But luckily this was never necessary.

The next challenge was to work with costume designer Rebecca Hale and food designer Lisa Heathcote to talk about colour palette and the look and feel of the party. Although this was a wake, of sorts, it was predominantly a family occasion with our four women leads– Sheila, Dawn, Emilia and Tanya – all needing to look wonderful but not overdressed or clashing. They also needed to carry in the food, so what they were wearing needed to be practical – no stilettos or trailing sleeves. And the food needed to survive two whole days outside in rain or shine.

These sorts of heightened family moments are the fulcrums of Delicious with its four female generations. The settings can be devastatingly beautiful and the frocks out of this world, but all this aspiration and glamour needs to be underpinned by strong writing and performances to deliver something that doesn’t tip into schmaltz or soap. The ambition of the camerawork and design helps to elevate the show, but towering performances like that given by Delicious matriarch Hancock at her own wake ensure the series maintains its own unique tonal brand of bittersweet.

The two-day stand culminated in a wonderful ‘on the blink’ moment when all four lead actresses were round the table, ad-libbing, and enjoying the family reunion as dusk set in and the camera pulled back on a long track to end the episode.

We seem to have turned a corner, with more and more series getting commissioned that have women leads and great roles for women throughout. Let’s keep up the momentum and build on this opportunity to make the best drama with women writing, producing and working behind camera. We’ve waited long enough. Now is our time.