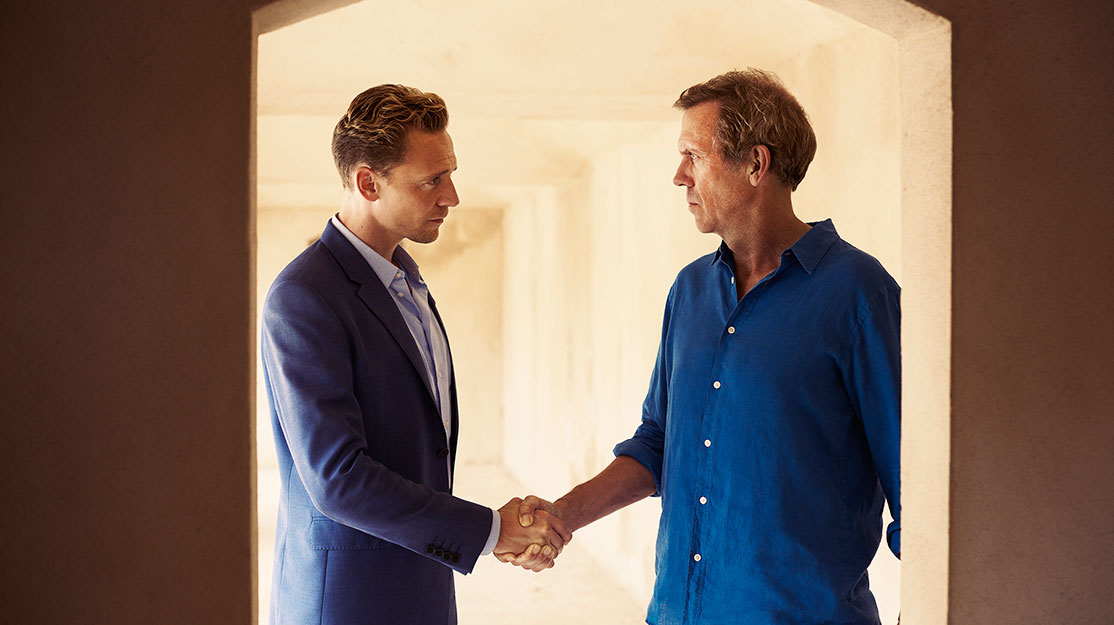 The Night Manager: Hiddleston takes on Laurie on BBC1

Drawing comparisons to James Bond, The Night Manager features a star-studded cast embarking on a globetrotting journey through the world of international espionage. DQ checks in with the BBC’s hottest new show.

Hugh Laurie, Tom Hiddleston, Olivia Colman, Tom Hollander, Elizabeth Debicki. As casting goes, this line-up could be very close to a broadcaster’s dream team. Add in award-winning director Susanne Bier and a story based on a novel by celebrated spy novelist John le Carré and The Night Manager appears to have all the ingredients for a mega hit series. Just add viewers.

The miniseries, which debuted on BBC1 in the UK on Sunday and lands on US cable channel AMC on April 19, marks the first television adaptation of a le Carré novel in more than 20 years in a story that brings together love, loss and revenge in a complex tale of modern criminality.

The show centres on former British soldier Jonathan Pine (Hiddleston), a hotel night manager who is recruited by government agent Angela Burr (Colman) to infiltrate the inner circle of ruthless arms dealer Richard Roper (Laurie). To get to the heart of Roper’s empire, Pine must allay the suspicions of his chief of staff Major Corkoran (Hollander) and resist the allure of his beautiful girlfriend Jed (Debicki).

Le Carré himself describes the adaptation of The Night Manager as “one of the unexpected miracles of my writing life: a novel I had written more than 20 years ago, buried deep in the archive of a major movie company that had bought the rights but never got around to making the movie, suddenly spirited back to life and retold for our times. And how!”

The adaptation, penned by David Farr and produced by The Ink Factory, isn’t an entirely faithful retelling of the 20-year-old story, however. In particular, the “chief British spook” had originally been a man named Burr but became pregnant Ms Burr – as portrayed by Colman.

Then there was the location. Much of the novel takes place aboard Roper’s yacht but – recognising the high cost and claustrophobic nature of such a small setting – the TV version was transplanted to what the author describes as a “palatial Gatsby-style villa” found on the Spanish island of Majorca.

The backdrop to Roper’s arms dealing was also shifted, from the war on drugs in Central America to the Middle East and pro-democracy Arab Spring.

“I never wanted the film of the book,” le Carré admits. “Actually I never do. I wanted the film of the film. And we all did. All I asked was that the central interplay between our protagonists remain intact, and the narrative arc of the original story – never mind where it’s set – be broadly the narrative arc of the novel, exploring the same human tensions and appetites, and resolving the dramatic conflict in the same broad terms.”

The author also praises the central performances and, in fact, the entire production of The Night Manager, going as far as to compare it to “those glory days in the 1970s when I was watching the BBC’s Tinker Tailor Soldier Spy being magicked to life by Alec Guinness and the inspired cast that surrounded him.”

Hiddleston, best known for roles in big-screen blockbusters Thor and the Avengers series, admits he was hooked by the script from the first episode and quickly sought out the novel.

“The character appealed to me because I knew, as an actor, I was going to have to operate at the highest level of my intellectual and physical ability because he is a field agent, but also has to be smart enough to go undercover,” he explains, comparing Pine to a certain James Bond. “I found his nobility, courage and morality very appealing – he is actually a very moral character and is filled with le Carré’s own moral authority about the world. There is a certain line that you can feel underneath all of le Carré’s work which is a very robust moral foundation: a belief in right and wrong; in decency and its opposite.”

In contrast to Hiddleston’s recent discovery of le Carré’s story, House star Laurie says he fell in love with the book when he read it in 1993 and admits he once tried to option the rights himself.

“I tried to get the rights before I’d finished the third chapter,” he reveals. “I was unsuccessful, of course – the great Sydney Pollack had jumped on it and wouldn’t let go – but the character of Pine – and yes, back in 1993 I impudently imagined myself playing Pine – is a fascinating one: the errant knight roaming the landscape, looking for a cause, a flag to fight for. Better still, to die for. I thought it was such a beautiful story.”

From the start, Pine is painted out as the hero, stepping out of his comfort zone in a bid to snare the bad guy. But it doesn’t take long for viewers to question whether he will become the very thing he set out to destroy. In contrast, Laurie’s Roper appears to travel in the opposite direction.

“Pine’s original goal is to bring down this monster, but at the same time resist the monster’s charm,” Laurie explains. “There are moments when Pine teeters on the brink of the dark side, when you wonder which way he will go. At the same time you might wonder whether Roper is teetering too – that somewhere inside himself he wants to be caught, to be betrayed. The audience has to judge for themselves where Pine and Roper come close to crossing the line in opposite directions – where Roper might plunge the dagger into his own chest and where Pine might become the very thing he set out to destroy.

“It’s an absolutely fascinating exploration, and I think this about so much of le Carré’s writing. Some describe him as a spy writer, but his stories so far transcend the notion of genre; he uses the world of the spy and the intelligence business to examine some profound questions. My God, I hope we can do it justice.”

Broadchuch star Colman – who is reunited on-screen with her Rev co-star Hollander – had just found out she was pregnant when she met director Bier, meaning her character not only changed gender during the adaptation process but also incorporated an additional element to her character. She describes Burr as a “zebra among the lions,” a woman in the male-dominated world of espionage who strives to do what she thinks is right.

“Burr knows that Roper is an arms dealer of the filthiest kind and that he’s making a fortune out of people’s death, misery and poverty,” Colman explains. “She is determined to take this monster down so she sets out to seduce Pine, knowing with his level of charm, sophistication and intelligence that he’d be able to infiltrate Roper’s inner circle and gain his trust to bring him down from within.”

Helming the six-hour miniseries is Oscar winner Bier, who triumphed at the 2011 Academy Awards with foreign-language film In a Better World (Hævnen).

Both Hiddleston and Laurie reserve praise for the Danish director, who is described by Hiddleston as a “crusader for the truth.” Laurie adds: “She is The Night Manager. Her vision, her taste, her approach has defined every part of what we are doing, and it’s been an absolute thrill to be a part of.”

A self-confessed le Carré fan, Bier says she jumped at the chance to join the “irresistible” project. “The drama series explores a world where the line between good and evil is completely black and white, yet we are drawn into the blackness,” she explains. “Audiences will be eerily attracted to the evil and I think that’s sort of what drew me to it. You’re never completely sure if Pine is on the right side.”

The biggest challenge, she recalls, was translating the complexity of le Carré’s novel to maintain the thrilling elements, as well as making the 20-year-old story more contemporary – hence the change of setting from South America to the Middle East.

But like many big-screen talents moving to television, Bier adds that she was also drawn to the challenge of telling a hugely complex story over six hours – three times the average movie running time.

“Like a number of other feature directors, I’ve come to realise that there’s great writing in television right now and something incredibly challenging in dealing with a longer chunk of storytelling,” the director says of her move to the small screen.

“I don’t think you could fit this into a two-hour slot because it’s such a rich story – the characters have so much nuance – and part of the thing that makes a TV series is the fact all of the minor characters are interesting, exciting and complex.

“It was so exciting having a whole gallery of fascinating, fun characters and you couldn’t predict where they were going.”