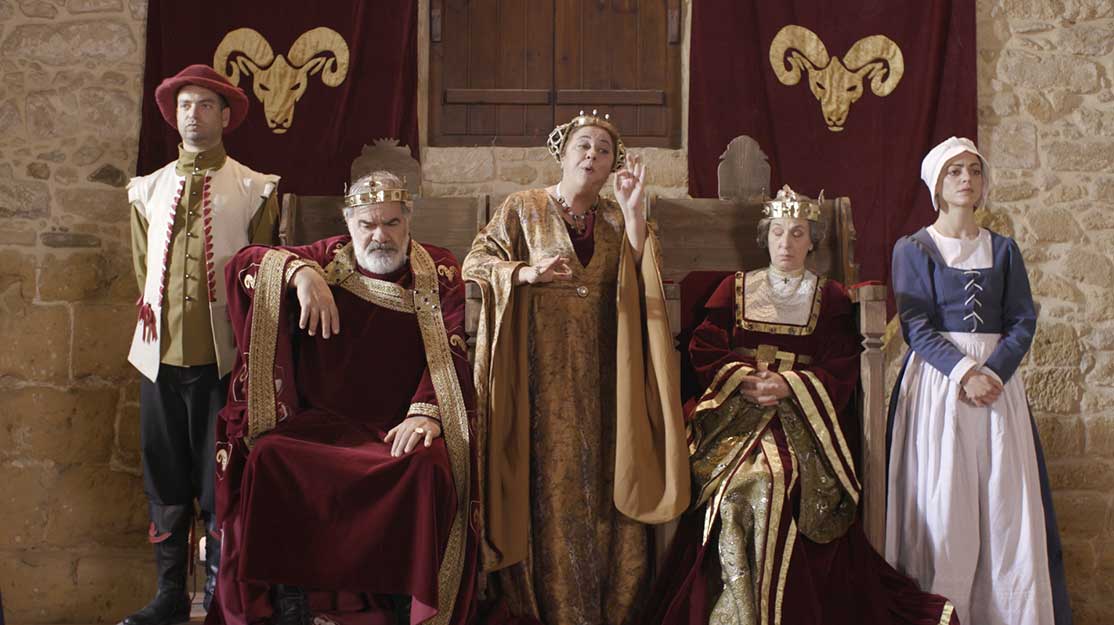 Greek writer Loris Loizidis has ambitions to move into television drama off the back of his latest comedy series, Paramythi… Allios (Fairy Tale… Otherwise). He tells Paula Tsoni about producing a show for both Greek and Cypriot viewers.

Set in Cyprus and showcasing aspects of the Mediterranean island that will be unfamiliar to most of the world, Paramythi… Allios (Fairy Tale… Otherwise) is the latest weekly series produced by Greek private net Alpha TV for Cyprus and Greece.

The original medieval comedy follows the adventures of the son of a murdered king as he returns to his homeland to claim his father’s kingdom from a tyrannical self-proclaimed Queen. There, he meets his father’s knights’ brave sons, who become his companions, and the Queen’s kind-hearted daughter, with whom he falls in love.

Creator Loris Loizidis, one of Cyprus’s most successful scriptwriters and a popular comic actor, came up with the concept of a medieval tale during a trip to Scotland a few years ago.

“It was then when I realised that such scenic treasures also exist hidden in Cyprus and Greece – medieval castles and temples, forests and waterfalls, which no one has ever used for a TV series,” says Loizidis, who also plays one of the knights’ sons in the show. “And that’s how this idea was born and bloomed, and we ended up with Paramythi… Allios.”

The comedy is shot entirely on location across Cyprus. “I found a deserted village in the region of Larnaca, which even the Cypriots do not know about, and we rebuilt and restored it,” Loizidis continues. “And [we also used] castles, medieval courtyards and real natural landscapes, such as forests, rivers and seashores, that fit.

“We don’t shoot in a studio. Even our indoor scenes, showing the palace interior, are shot in a real location that we restored. It is an authentic stone building, renovated for this purpose. We put on a new roof so we were able to shoot there, and this became the king’s rooms and the palace galleys.”

Having initially risen to fame with pubcaster CyBC’s long-running satirical show Patates Antinahtes (2005-2016), which he co-wrote and also starred in, Loizidis met phenomenal success in his native Cyprus with another period comedy a few years ago – Aigia Fuxia (Fuchsia Goat, 2008-2010), a rural comedy that he co-wrote with Christiana Artemiou for Antenna Group’s local TV station Ant1 Cyprus.

Although the series never aired on Ant1 in Greece, it gained a significant fan base in the country via VoD viewing, proving the staggering potential of countryside-set comedies and a strong local flavour, both of which made a noticeable comeback in Greek original scripts in the years that followed.

Seven years later, Paramythi… Allios is new territory for Loizidis, who must once again captivate audiences in both countries – only this time equally and simultaneously, as the series was commissioned by Alpha for both its established network in Greece and its one-year-old sister channel in Cyprus.

“There is a big difference from Aigia Fuxia: the cooperation of two countries. There are two different mindsets that need to be adapted and combined to become one. Aigia Fuxia was purely Cypriot, written with old, authentic Cypriot idioms, with its own humour and a writing style that was much easier for me. Now, every quote you write, you have to think about it in two ways, with two different mindsets and philosophies to see whether it will get through to viewers in either country or if you need to change it. So most of my effort goes into adapting the humour and the situations.”

The limited shooting time available for each episode is another strain for Paramythi… Allios, Loizidis admits. “It is hard to shoot a period series within a few days, compared to the time offered to foreign productions for shooting similar dramas. Limited time makes you compromise your ambitions a bit and remove difficult things that cannot be shot on time. There are limitations for the battle scenes, the horse riding scenes and the like.”

Time restrictions also mean director Alexandros Pantazoudis has to do most of his shooting without Loizidis on set, as the latter spends the week both preparing scripts and readying himself for his acting scenes as Lorenzo, one of the knights’ sons who hides the fact he is gay and in love with the show’s protagonist.

“Because of the era in which the comedy takes place, this is a role that needs to be enacted very delicately and frugally,” Loizidis asys. “It can’t be a liberated gay character, he needs to be in line with that era. This certainly has a difficulty, not only in the script but also in the acting. Along with the Siamese twin sisters who run the tavern, Lorenzo is one of our most difficult roles to act out.”

But Loizidis is certainly up for a challenge – an attitude that helped bring him to Alpha in the first place, following many years working with Ant1 Cyprus. The news of his signing with a rival network made headlines in the local press, says Loizidis, adding: “I never intended to move channel, because we had done many projects together and I was very happy with the collaboration. The only chance I would leave was if I received a proposal for something much bigger and more challenging. When Alpha’s people came to talk, they asked if there was something I couldn’t do with my current channel. So I had this idea on paper [for Paramythi… Allios], which they liked, and that’s how it happened.”

The writer and actor believes local channels are “thirsty for good original scripts.” He continues: “We see that good scripts rarely happen, and when they do, it’s a wish come true for TV stations. That means there are opportunities for new scriptwriters as well as for the established ones, as long as they can work correctly and create a good script.”

Although Cypriot fiction productions with cast and crews from both Greece and Cyprus have been increasing due to the Greek recession – which limited production budgets of the major Greek networks and brought them to Cyprus for lower costs – Paramythi… Allios stands out for being the first comedy on which the two countries have ever worked together.

“The usual daily romantic dramas are easier to get through to the two audiences, I believe,” Loizidis says. “There are not many ways to say a dramatic line, but there are many ways to say a comic line to make the audience laugh, and this is yet another bet for us. Adapting the script to make it suitable for both countries loses us some authenticity among both audiences and we will see how it will be received.”

The summer months mean more hard work for everyone involved in Paramythi… Allios, from ironing out imperfections and doing script readings and rehearsals to getting a head start on episodes for the second season. “We’ve sort of acted instinctively until now, doing the best we can within the given timeframes,” says Loizidis.

With an eye for international trends in fiction, Loizidis also aspires to test his skills outside of comedy sometime in the future. “I would like to do a dramatic series, but by saying dramatic, I mean really dramatic, not a daily soap opera. A series with few episodes and a very powerful plot, which I would write it as I would want it. Like in foreign series, it would be just 12 episodes, a dramatic story that has a start and an end. But this is very hard to produce in Greece or Cyprus anymore because of the budgets and the lack of demand [for these series.] If you want to do a dramatic series, it needs to be a daily.”

Reflecting on opportunities for local talent, Loizidis says: “Luckily, the Turkish series trend in Greece has ended. Therefore, there are local productions happening. Now the reality trend is on the rise [with local versions of shows like Survivor]. But this will end too. What the viewer longs for is fiction in their own language, with their own people, with their own identity. And this is what is going to start over again eventually.”