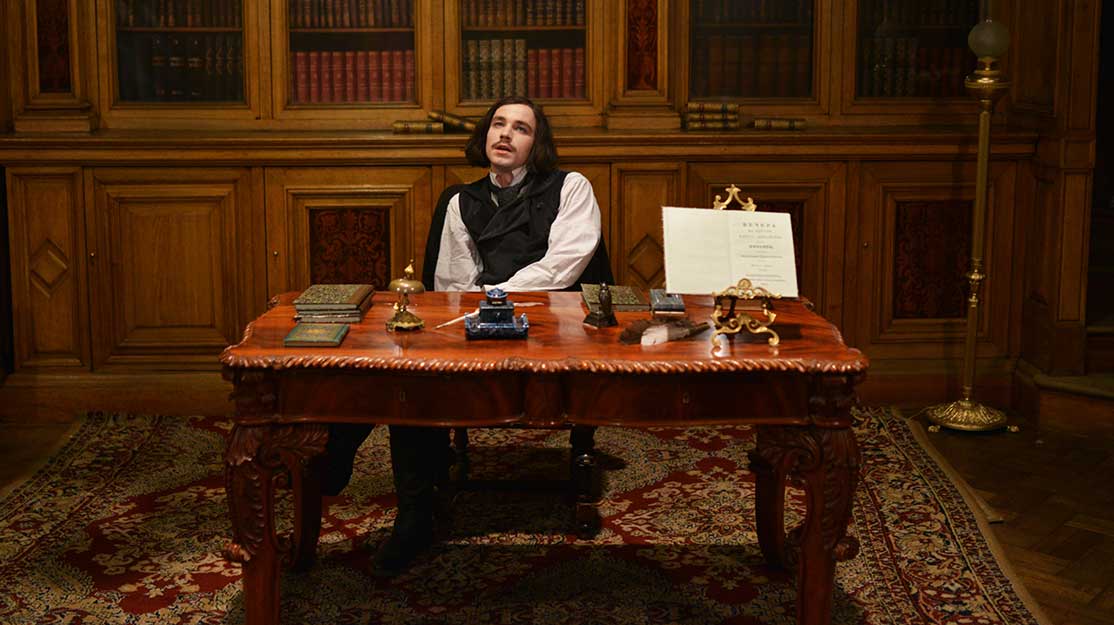 Celebrated Russian writer Nikolay Gogol is the star of his own novels in gothic fantasy drama Gogol, which has been launched on the big screen before its debut on TV3. DQ finds out more.

While the film business is coming to terms with streaming platforms such as Netflix bypassing the big screen altogether and putting movies straight into subscribers’ homes, a new Russian drama is reversing that trend by making its debut in cinemas.

Gogol: Origins was first released in theatres last August, with two further instalments due to get big-screen releases in April and August respectively before the whole eight-episode series airs on Russia’s TV3.

An unusual move, perhaps, but a financially rewarding one. Within the first two days of its cinema release, it returned its production costs and closed its opening weekend by breaking national box-office records.

One of the most expensive projects ever produced for Russian TV, Gogol’s “revolutionary” roll-out echoes that of Marvel’s Inhumans, which was released on IMAX screens in the US before making its debut on ABC.

After its theatrical release and subsequent digital release on platforms such as iTunes, the full series of Gogol is expected to air on TV3 three months after last theatrical release. Importantly, the TV series will feature two extra episodes that will not have been seen in cinemas in order to attract new viewers and those who have already seen it on the big screen.

TV3 marketing director Lily Sheroziya says: “Gogol is both a TV series and a movie. It’s a revolutionary approach. Most channels strive to produce high-quality content. We want to do the best content for our viewers but, to do that, you need a lot of money. We decided that our product deserves the large screen and Gogol became the first series ever to get a full theatrical release before it ran on television.

“In the first weekend, Gogol earned all its production costs back. It really inspires us to believe it’s not just a standalone event but something that will revolutionise the way we work with high-quality series.”

Sheroziya adds: “The budget was a little bit more than the normal series budget in Russia but not a film budget. That’s why it’s a real success, because we managed to have a great box office with the budget of a series.”

A gothic mystery thriller, Gogol centres on real-life figure Nikolay Gogol (1819-1898), one of Russia’s most acclaimed and popular writers, who is planted in a ghastly world of fairy tales and his own stories.

For TV3, it was key that the series not be a biography of Gogol but should instead take the character and his stories further in a bid to attract a younger audience. The visual result is something akin to US drama Sleepy Hollow and the film of the same name.

“Gogol was developed for three years, during which we were dedicated to making and shooting the pilot,” says Fedorovich Valeriy, director of TV3. “Then when we saw the pilot, we understood it had a certain cinematographic quality and value – it would look as good on the big screen as it would do on TV sets.”

Nikishov says it was clear early on in the development process that Gogol should become the hero of his own novels. “Gogol is a very famous writer, like Edgar Allan Poe, and his novels are very gothic and mystical,” he explains. “That’s why we thought it was a great idea that everything he wrote, he saw through his own eyes and that was the start of this project.

Valeriy continues: “His life was full of mysteries. Gogol was a weird person himself. He had many phobias. One of his key phobias was being buried alive and apparently it really happened to him. He was very popular among other writers, and Mikhail Bulgakov in particular was a big fan. At some moment they decided to open his grave and, when they opened the coffin, there were scratches on the inside of the box.”

“We think it’s a legend but it’s a good story,” Nikishov adds. “And there was no head in the grave.”

Addressing how the series will differ from the theatrical releases, Nikishov says every episode that will air on TV3 will be different in some way from the films, offering added value to what has already been released. “It’s not the movie,” he says. “The movie is much shorter than the TV series. That’s why I think it’s really two different products. Also, TV3 is a national channel. Many people will watch it who did not see it at the cinema.”

Produced by Seda (Trotsky), much of Gogol was filmed in and around St Petersburg with substantial visual effects also involved. “The filming schedule was like that for a series, rather than a film, in terms of the amount of minutes shot daily,” Valeriy says. “In the series we have three different seasons, and last summer was very cold in Russia and everyone was complaining. Only the producers were happy because it gave this gothic mood on the set. We had to shoot the final scenes in May and usually it’s summertime and the leaves are bright and beautiful, but this May we had snow.”

With Gogol: Origins utilising a release schedule similar to that used by Marvel’s Inhumans, Marvel’s extended family of comic book superheroes may also inspire future dramas to air on TV3.

“At the end of the series, other Russian writers appear,” Valeriy adds. “So if we wanted to make a Marvel universe of Russian writers, there is the possibility to feature people like Chekhov and Dostoyevski.”