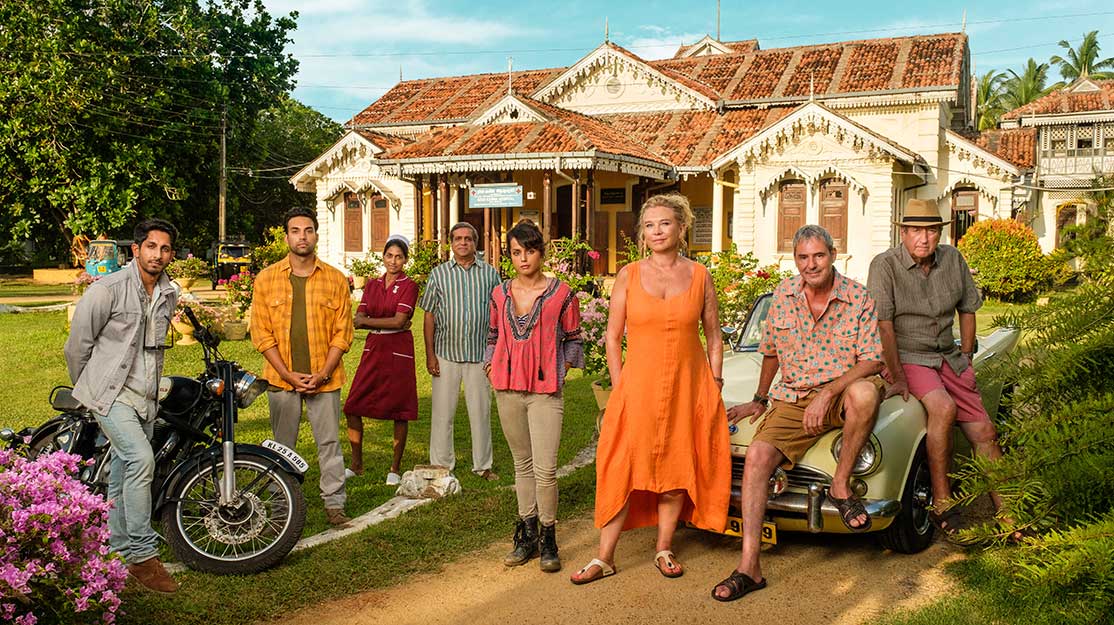 A dose of Karma

British India-set medical drama The Good Karma Hospital returns for a second season as the eclectic cast of characters face new challenges in their professional and personal lives. DQ goes behind the scenes on location in Sri Lanka.

Setting a feel-good drama in a sun-soaked paradise has proven a fruitful formula for British TV makers. It’s been deployed with success in series from Death in Paradise and The Durrells to Wild at Heart, The No 1 Ladies’ Detective Agency and even Doc Martin.

Most recently it’s been a winner for ITV’s The Good Karma Hospital, which is back this month for a second season. Good Karma’s USP is that it’s a medical drama that offsets its palm-fringed backdrop with emotional stories from a run-down rural Indian hospital. There’s added comfort for viewers in finding familiar faces stationed in this exotic destination, including Amanda Redman and Neil Morrissey.

Set in Kerala in southern India, Good Karma is actually filmed in Unawatuna on Sri Lanka’s west coast to avoid India’s monsoon season. It’s based on the experiences of writer Dan Sefton, who also pens Sky 1’s Delicious and was the man behind last year’s Trust Me with Jodie Whittaker, recently renewed for a second season by BBC1. Accident and emergency doctor Sefton – currently taking a hiatus from medicine due to his writing workload – got the idea from working in a cash-strapped cottage hospital in South Africa after qualifying as a doctor.

DQ is visiting the stiflingly hot set of the drama at the dilapidated Amarasooriya Teachers Training College, which has been taken over for filming. Though set on a busy main road, it’s surrounded by large gardens that bring a blast of colour to the screen, and on which sits a charming open-air shack that serves as the doctors’ café. Off-camera, it’s a different story: dozens of extras mill about, crew members carry cables and lights, and there’s a queue for the food service truck’s fresh coconuts. Ask for one and the man behind the counter takes a machete, whacks the top off a coconut and sticks a straw in it – not a common sight at British craft service tables.

Redman is a regular customer. “I find the best way to deal with the heat and humidity is to keep still and drink coconut water,” says the actor, who works inside the college in temperatures that regularly reach 40°C. “Between scenes I’ll just sit with my coconut water and a fan on my face.”

Redman is Good Karma’s biggest name, playing the outspoken Dr Lydia Fonseca, an ex-pat surgeon with a big heart and brusque manner. Redman is a fixture of British TV, having starred in At Home with the Braithwaites, Mike Bassett: England Manager and New Tricks, and the no-nonsense Fonseca is a character close to her heart. “I love her passion and her warmth,” says Redman. “She says it like it is, which, in an increasingly PC world, is very refreshing.”

As Greg McConnell, Fonseca’s long-term boyfriend, Morrissey has lucked out – his character owns the local beach bar, which means the bulk of his scenes are played out in an open-air set cooled by Indian Ocean breezes.

Season one dealt with Walker’s impetuous decision to leave her NHS job and emigrate to India, only to find herself at Fonseca’s cash-strapped hospital. To avoid a sophomore slump, Sefton and producers Tiger Aspect had to find new storylines for season two, which begins in the UK this Sunday. Adding to the difficulty of their task was the fact that a major character, Maggie Smart (played by Downton Abbey’s Phyllis Logan), died at the end of season one.

“One of the big decisions we made was not to bring in any new regulars,” explains executive producer Lucy Bedford. “What we felt when reflecting on season one is that we had this amazing core cast, and that the nature of show meant we didn’t get to know them as well as we should have.

“So, along with our robust stories of the week, we also wanted to give a bit of space to the serial elements of the show, with all the characters going on big journeys.” Dr Walker will explore her Indian heritage and Dr Fonseca her inability to commit, while McConnell helps Maggie’s widower, Paul (Phillip Jackson), through his grief.

To ensure the exotic setting remains eye-catching, new filming locations were found for the series, which is distributed globally by Endemol Shine International. Dr Walker has been moved away from her cottage in the rice fields into an urban flat in fictional Barco – filmed in Weligama, a half-hour drive down the coast. “We did it to keep evolving the visual palette of the show and to give Ruby a different connection to the world, because she’s not a tourist anymore,” explains Bedford.

Episodes three and four are set on a lush tea plantation (three different plantations were used) and the final episode features a full-scale Indian wedding with all the regulars in traditional dress. Another big set piece sees Dr Fonseca visit her former medical mentor (played by British stalwart Sue Johnston) on her houseboat, built on a private jetty on nearby Koggala Lake.

The benefit of shooting in Sri Lanka is the low cost of labour and materials that enabled the production to mount big set pieces. For starters, up to 300 extras per day could be hired and clothed, as opposed to 20 to 30 per day in the UK. “The production side is one of the great gifts about shooting out there,” explains Bedford. “Because construction is cheap, we were able to mount these sets we wouldn’t normally be able to. The art department built a full-sized replica Keralan houseboat for the finale, so we could tell an emotional story but in a stunning setting.”

The downsides to filming in the country, says Bedford, are that vehicle hire can be expensive and certain equipment is unavailable – a portable ultrasound machine had to be flown from in the UK. A few actors went down with stomach troubles, and a serious outbreak of dengue fever – a potentially fatal mosquito-borne disease – in Sri Lanka saw two crew members admitted to hospital.

But the benefits of filming in such an alien locale outweigh the drawbacks. Over drinks at their hotel, the actors enthuse and laugh about their encounters with Sri Lanka’s wildlife. Morrissey flashes photos he took of a snake that slithered into his hotel’s lounge and Acharia recounts how she found a scorpion nestled inside her yoga mat. Redman spotted a crocodile in Koggala Lake, though from a safe distance – the houseboat she filmed in had safety nets around it.

Bedford, Sefton and their team are busy working on storylines for Good Karma’s third season, should it be recommissioned. Along with developing the characters’ personal lives, they conduct meticulous research into relevant medical storylines reflecting Indian culture in a bid to provide an engrossing hour of television that has a satisfying emotional payoff but remains upbeat.

Morrissey describes his take on Good Karma’s selling point: “When you’ve got those vistas of Sri Lanka on your 55-inch Samsung, there’s a feelgood factor. At the same time, we show people having serious issues, and it’s good to know that people in far-flung places are having the same problems as you are having at home.”