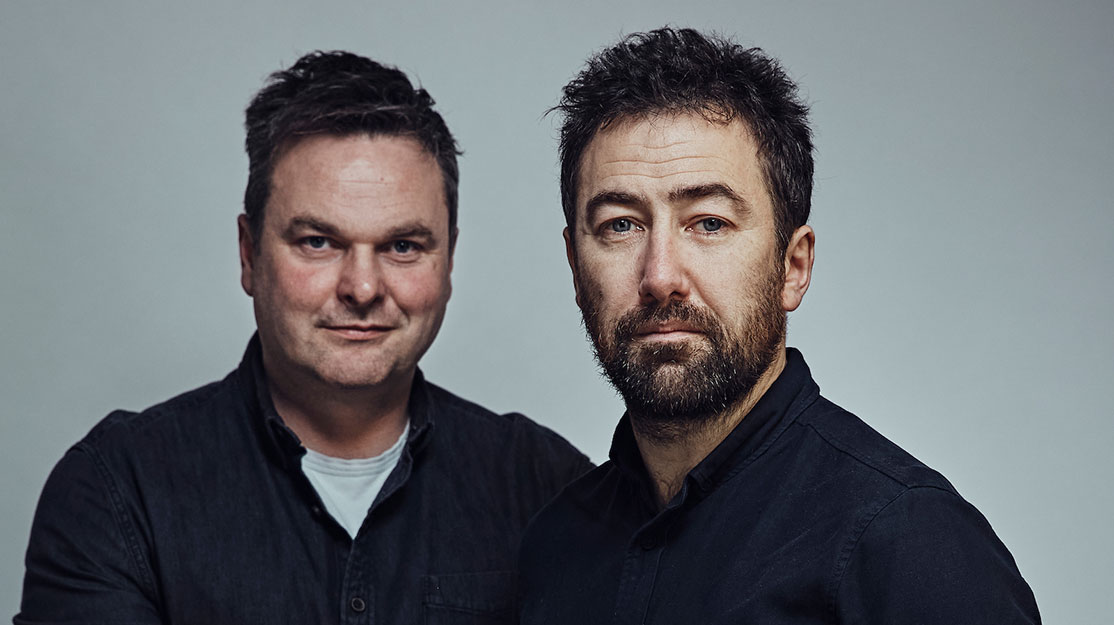 A different shade of Blue

From the writers of The Salisbury Poisonings comes a Belfast-set police drama about three rookie officers heading out on the beat for the first time. DQ speaks to Declan Lawn and Adam Patterson about Blue Lights.

Similar standards have been now applied to the writers’ latest project, Blue Lights, except this isn’t a true-life drama. Instead, it is an entirely fictional story about three rookie cops working in Belfast.

“We didn’t want to get pigeonholed as writers and directors who only ever do true crime or factual drama. We wanted to be able to spread our wings,” Lawn tells DQ. “After The Salisbury Poisonings, we were on the lookout for work that was still grounded in reality, was contemporary and authentic but that wasn’t necessarily factually true.”

Blue Lights, which is at the start of an 80-day shoot, has been two-and-a-half years in the making. Its storylines are based on things Lawn and Patterson have uncovered or been told during their research and extensive interviews of real police officers – but unlike with Salisbury, the writers have not been beholden to the truth.

Directed by Gilles Bannier (Trigger Point, Tin Star), the series introduces Grace (Siân Brooke), a mother of a teenage boy, who has made the decision in her 40s to leave her steady job as a social worker to join the Police Service of Northern Ireland (PSNI). Her fellow rookies are Annie (Katherine Devlin), who struggles with the fact that her chosen path may mean having to leave behind everything she’s ever known, and Tommy (Nathan Braniff), who is desperate to prove himself despite being disastrously inept at the practical side of frontline response policing.

“Grace has basically taken a massive gamble,” says Lawn, “and her main character trait is that she believes she can change the world, that she can do a lot of good and make a huge difference. But the biggest thing she has to learn, possibly at the cost of her job, her personal safety and security, is that in this job you can’t really help everyone over the long term. Your job is to respond to their needs on the day and then go back to base and then go home. But she’s making a lot of mistakes.”

With the series tapping into Belfast’s unique history and the residue of mistrust in the police among some communities after the Troubles, Annie joins the police because she wants to help people, but she’s unaware just how much her career will affect her home life.

“That’s what unravels over the first few episodes – how it essentially places people like her mother in danger, just because they’re related to her,” Patterson says. “She’s feisty, she’s full of energy, she has a brilliant energy in the police station. She’s really cocky. She doesn’t back down – that’s one of her greatest strengths, but it also gets her into a lot of trouble.”

Then Tommy “is basically a bit of a nerd,” Lawn explains. He comes from an academic background and put on a fast-track programme with a view to becoming a detective.

“He’s not due to be out on the ground for long, but what’s clear is that he’s really bad at the practical side of things, everything from radio protocol and how to talk to people to doing first aid and CPR,” Lawn continues. “He’s managed to struggle through his training, but he’s got a lot of big gaps in his skill set, and the biggest gap of all is that he can’t shoot. His intellectual insight becomes a huge asset to the whole team but, practically, he’s just completely helpless.”

Both hailing from Northern Ireland, Lawn and Patterson were particularly keen to highlight the “unique” city of Belfast, which they feel often goes unseen on screen.

“There’s a great heart in the city that got people through those periods of darkness, and a sense of hope and optimism that we often feel sadly isn’t represented in shows about Belfast,” Patterson says. “Over the years, it has tended to be quite a grim representation of a city where it already rains a lot. It’s grim enough. It was imperative to us to tell a story that was obviously honest and truthful to the police, but that also showed that hope and optimism and resilience in people.”

They found the right perspective to tell that story in the form of new cops completing their first days in a job that requires them to carry a gun.

“It’s a thriller with a healthy dose of psychological realism,” says Lawn. “Character is at the heart of this show. So is dark humour, which runs through Northern Irish society like the pattern through a stick of rock, but particularly in the police. That is how they deal with the incredible stress of their job, and it is uniquely stressful here in Northern Ireland. There’s a significant threat to them just because they’re police officers.”

An overarching storyline involving the security services and a big surveillance operation runs through the series, while each of the show’s six episodes will see the cops respond to a range of different cases that the creators promise will be a mixture of tragic, funny, bizarre and surreal.

“We’re both Northern Irishmen and we’re both former journalists who have made careers here and, in many ways, these scripts are a distillation of everything we’ve learned over our journalistic careers about this place, about the weirdness of it and the post-conflict oddness of the place,” Lawn says. “We’ve been given an opportunity to distil everything we know about it.”

The six-hour timeframe also gave them the chance to find greater nuance in stories about Northern Ireland than they could in a 30- or 60-minute documentary.

“In journalism we told a lot of stories about how the world was working, but not so much about people because we didn’t have the time to develop the people over that short creative framework,” Patterson adds. “With six hours of drama we can do that. That’s why it’s really exciting for us.”

But what can viewers tuning into a fictional drama from the writers of The Salisbury Poisoning expect? Authenticity is the keyword, with Blue Lights based on months of research into the PSNI and the stories of its officers, some of whom were closely involved in the writing process.

“Salisbury took off in a way that we probably didn’t expect,” says Patterson. “If we’re being really honest, we were journalists who kind of Trojan-horsed our way into the world of drama off the back of journalism. The real people [in The Salisbury Poisonings] wouldn’t talk to journalists and we had to convince them that drama was the way to tell their stories.

“But we feel more liberated now because we can take the narrative arcs anywhere we want to go. As dramatic storytellers, that is what really excites us, that limitless possibility in creative storytelling. In journalism, you’re always bound by what has actually happened in the world. Now we get to decide what the world is.”

Lawn and Patterson ran a couple of writers rooms to flesh out the characters and storylines. They then wrote the scripts with Fran Harris (North Sea Connection), who penned episode three and co-wrote episode four.

Patterson would visit Lawn at his Belfast home, where they would write out individual scenes on Post-It notes and map out entire episodes – the same way they used to make Panorama documentaries for the BBC. Lawn would then have the first go at writing dialogue, which Patterson would later revise.

“Declan will send me a thread of an idea and ignite something in me, and vice versa. He’ll send me the first draft over and there’ll be things I hadn’t even thought about, and I’ll just be kind of amazed by how he’s even thought of those. It’s like a force between us. We just have a unique understanding of each other.

“Having Fran, an Irishwoman, as part of it too was brilliant. She brought different insights because she is from a different part of Ireland. She would have a different viewpoint and added so much more to the story, to the characters, to everything.”

The writers hope rooting the series in character will give Blue Lights a universal appeal they recognise in one of their own favourite series, Friday Night Lights.

“It’s about an American high-school football team – you can’t get more hyper-local than that,” Lawn says of the US drama. “I just find it really compelling because the characters are so good. This is the same, in the sense that it’s a character drama. It’s immersed in the local but we think it will appeal to anyone who has taken a leap in life, anyone who’s started a new job, anyone who has kind of left behind one family to join another. All of these things are universal human experiences. It doesn’t matter whether they’re happening in Belfast or Berlin or Bogota, it’s the same vibe.”

“Dec and I had a tagline that Blue Lights is not about the complexity of a murder investigation, it’s about the simplicity of being punched in the face,” says Patterson of the “everyday mundane violence” that features in the show. “Everywhere in the world, you’ve got an opinion of the police, so that will resonate globally. But we’ve got a slightly different take here that we hope will be an exciting new engine for us and everyone who watches it.”

They also hope Blue Lights – produced by Two Cities Television and distributed by BBC Studios, which is launching the series among other new dramas at the BBC Studios Showcase event this week – will throw up some surprises for even the most ardent crime watchers when it airs on BBC One.

“It’s not the first show about response police officers. But in our humble opinion, it’s a very authentic take on response cops and it’s a very honest attempt by us to show what that world and the people who work in it are really like,” Lawn says. “It’s our best shot at taking a little part of the world and showing what it’s really like.”