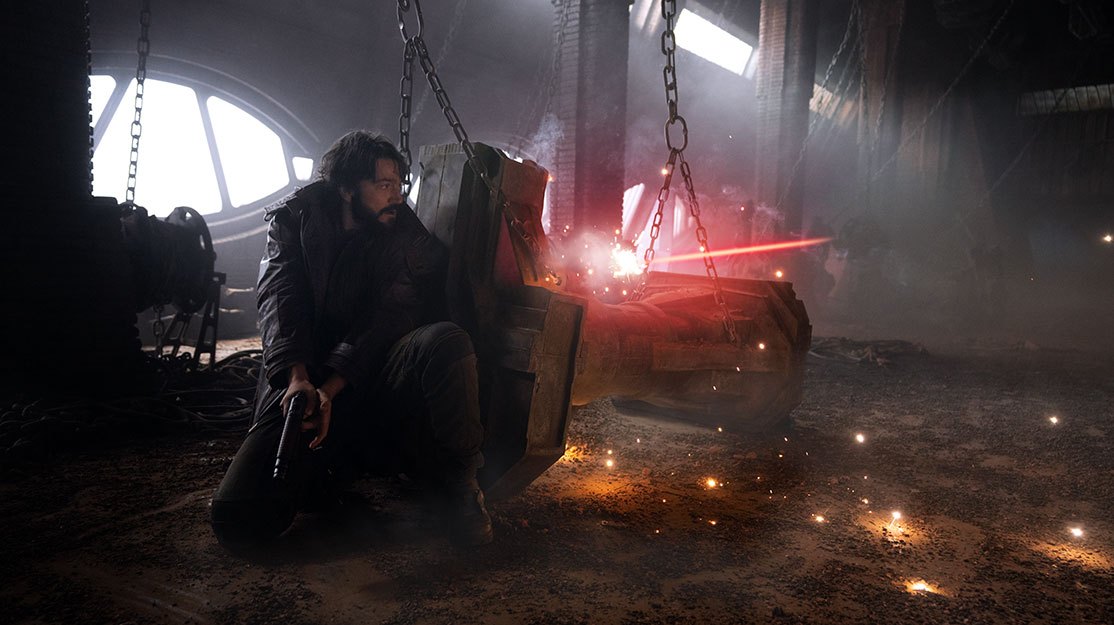 Showrunner Tony Gilroy tells DQ how he endeavoured to take the Star Wars franchise in a new direction – away from Jedi, the Force and Skywalkers – with Disney+’s Andor, the series prequel to hit feature film Rogue One: A Star Wars Story

Andor may be the most recent live-action entry in the Star Wars saga, but you won’t find mention of Jedi or the Force in Tony Gilroy’s grounded and gritty political story about a thief who would become a spy.

Gilroy was on the writing team behind Rogue One, the 2016 feature that served as both a prequel to and a spin-off from the original 1977 film Star Wars. That story introduced Cassian Andor and a group of rebels who attempt to steal plans for the Death Star, a gigantic space station capable of destroying planets.

With Disney+ series Andor, Gilroy goes back further to explore Cassian’s own origin story. The series centres on events that began five years earlier than those in Rogue One and lead Cassian to discover the role he can play in the growing rebellion against the Empire and become the hero he is destined to be.

Since its release in September last year, Andor has been widely acclaimed for shifting the focus of Star Wars away from the familiar characters such as the Solos and Skywalkers featured in the three main film trilogies and small-screen series such as The Mandalorian and Obi-Wan Kenobi.

Now with the upcoming second – and final – season in production, showrunner Gilroy jokes that returning to the series is like having a second child: “You simultaneously feel, ‘Oh well, I’ve done this before and I know how to do it, and this is what I’ve learned,’ but at the same time, you’re just terrified because you know what it’s going to take to get it done,” he tells DQ. “I’m not sure, on balance, how that works out, but I’m sure it’s a very common experience.”

With season two of Andor meeting the starting point of Rogue One, Gilroy and fans alike will already know where the plot is heading, with four years of story set to elapse in just 12 more episodes. But rather than feeling restricted or contained by the knowledge of where Andor’s story must conclude, Gilroy says it makes his job much easier.

“It’s a real gift to know where you’re going and to know what the emotional result is,” he explains. “We’re not above upending or subverting [the story]. Not that we’re trying to tip things upside down, but maybe there are reasons you don’t know for sure what happened [in Rogue One]. We’re capable of doing that, but emotionally we’re going to end up with some pretty heavy consequences.”

After Rogue One, Gilroy says producer Lucasfilm made multiple attempts to create a TV show about Cassian’s backstory – but the writer wasn’t interested in it for several reasons. In particular, he didn’t believe that a TV series that needed to replicate the production design and visual effects that fans would expect from a Star Wars film would be economically viable.

“Who was going to pay for that? That’s been one of the challenges,” he says. “You can’t go cheap on that. You can be efficient, you can do a lot of really innovative problem solving, but in the end it has to look and feel like Star Wars.” Gilroy just couldn’t see how it could be done. But the writer inadvertently made the case for a big-budget series when a friend asked him to critique proposals for a new Star Wars series – a document that became his manifesto for how he would do it himself.

His ideas were “really insane,” he says, “but a year later they came back and were like, ‘We don’t want to do the other version now. The economics have changed and we might be able to afford to do a show like this.’ That’s when the conversation started.”

Both Lucasfilm and Gilroy’s interest in exploring Cassian’s backstory comes from the character’s dark history that is alluded to during Rogue One. At one point, he says: “Everything I did, I did for the Rebellion. And every time I walked away from something I wanted to forget, I told myself it was for a cause that I believed in. A cause that was worth it. Without that, we’re lost. Everything we’ve done would have been for nothing.”

Gilroy picks up: “So the idea of taking that character and rolling the film back five years and saying, ‘How far away could that person be? How messed up could they be, to be the person then in the end who is going to do the ultimate thing. He’s going to sacrifice himself for a greater good.’ I was really interested in taking somebody who is a roach and turning them into a butterfly. How do you do that? That’s interesting to me.”

From the outset, the showrunner’s own mission was to make Andor as different as possible from what viewers might expect from a Star Wars series.

“In this massive galaxy, Star Wars has concentrated exclusively on a royal family, in a way,” he notes, comparing it to the idea that Netflix series The Crown is all people might know of British history. “I don’t think most people in the [Star Wars] galaxy know what a Jedi is or what the Force is. But there’s a revolution coming, it’s coming in this five-year period.

Coming from a film background, where Gilroy’s credits include all four Bourne films, Gilroy didn’t want to adopt a traditional television writing room system for Andor. His only exposure to that world had been as a consultant on two seasons of Netflix’s House of Cards.

Instead, he did a lot of work on his own, mapping out the beginning, some of the middle and the end of the season – around 150 pages of material – before convening a five-day writers room with his brother, fellow writer Dan Gilroy (Nightcrawler), and House of Cards creator Beau Willimon.

“It was a five-day thing we did to basically bang out the story,” Gilroy says. But what made the process particularly unique was the presence of production designer Luke Hall and producer Sanne Wohlenberg.

“They were there every day, watching the show that they’re going to be making, building, sweating and dying for. And not only watching it being built, but watching all the ideas that were being rejected as well,” the showrunner continues. “It moved very fast in that room. It was super high-tempo. I’ve never had experience like that, but the producer and the production designer were watching the show happen in front of them.” Gilroy and his writing team then went off to write their scripts, and that same process was repeated for season two, with Tom Bissell joining the fray.

Wohlenberg (Chernobyl, Vikings) had been involved in previous attempts to build a series around Cassian, and Gilroy describes their partnership as a “shotgun marriage” that proved to be an “awesome” collaboration. Meanwhile, hiring designer Hall is an example of the way Gilroy pushed Lucasfilm and parent company Disney to give him creative control over Andor.

“You don’t just jump in on this thing and sign on the dotted line. You tiptoe into these things,” he says. “One of our first challenges to Disney and to Lucasfilm was to say, ‘Hey, we want the production designer from Chernobyl,  not the Star Wars production designers.’ Well, that’s a pretty big challenge. That’s as radical as saying we want Nick Britell to do the music and not John Williams [Britell was also hired].

“If you say you want to change the vocabulary, change the feeling of it and really stretch this franchise in a new direction, these are the kind of changes you need.”

Hall and composer Brittell are both back for S2, along with costume designer Michael Wilkinson and hair and make-up designer Emma Scott. “I’m still writing and I make changes along the way,” Gilroy says. “Economics change. ‘We can’t afford this, we can’t get this, we can’t do that.’ So things have to change. The writing never stops, but almost all of our team is back and it’s a team that is used to doing this now. We only have to do it one more time.”

With S2 not due to land until 2024, Gilroy says he will be relieved once the scripts are “super tight” in the spring and he can focus on being a showrunner, rather than a writer-showrunner. He also won’t have to start thinking of a storyline for a new season, as he did during production of S1, as the second run concludes the Andor story.

What he may do next, he has no idea. But Gilroy says he can see throughlines between all the screen work he’s ever done, which includes action thrillers such as Bourne, political thrillers like Michael Clayton and State of Play, and now sci-fi with Rogue One and Andor.

“I know how to do Bourne, I know how to do those kinds of things, and that comes in handy. We’re just prepping something right now [on Andor] that really felt like that to me,” he says. “You go through different periods of your time as a writer – I’ve been doing it for a long time.”

But when it comes to Andor and living in the Star Wars universe, “this is the biggest, most abundant canvas I can imagine being offered,” he says. “I’m getting 1,500 pages of original storytelling to go after everything I know about human behaviour, revolution, war, heroism, betrayal, love, commitment, sacrifice, pressure and evil. I’m not a young writer but I still have some young energy, and it’s when I get tired that I have to remember the responsibility of this gigantic canvas I’ve been given. It really is a unique opportunity.”