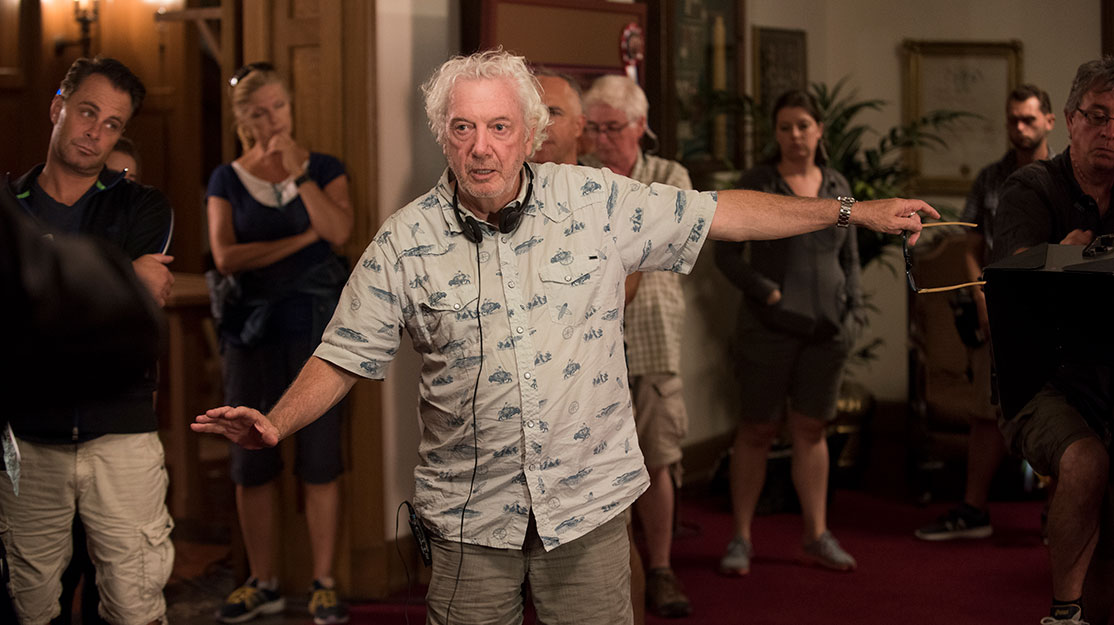 With more than 200 hours of television drama in the can, Canadian director Don McCutcheon tells DQ about working on Murdoch Mysteries, the changing role of directors and why he thinks his best work is yet to come.

When director Don McCutcheon signs up for a new project, he always does his homework. “When I was hired to do an episode of The CW drama Beauty & the Beast, it was season four and I watched every episode of the first three seasons,” the Canadian director reveals. “I wanted to see the evolution of the series and how it grew and matured. I wanted to know where it came from to understand where I was when I stepped on the floor.”

Given that approach, McCutcheon (pictured above) might be best avoiding long-running series such as NCIS, heading into season 15, or Law & Order: Special Victims Unit, which returns this fall for season 19. But in fact it’s another long-running crime show for which he is best known, having helmed more than a dozen episodes of CBC drama Murdoch Mysteries.

McCutcheon first joined the period murder mystery series for season three, back in 2010, and most recently completed episodes one and two of the forthcoming 11th season, which is due to begin airing in October.

“It’s like putting on comfortable slippers,” he says of returning to the series, which stars Yannick Bisson as William Murdoch, a detective working in Toronto around the turn of the 20th century. “Murdoch is an interesting show because although there’s a formula behind every episode, it never rests on that formula. It has always embraced the period, and the writers bring history, science and invention into the show. It was an amazing time and a period of invention – everything from the electric light bulb and the telephone to motorised vehicles and flight – so they’re able to use those things very cleverly within the formula of a murder mystery.

“It also changes its tone every week, so viewers aren’t entirely sure whether they’ll see a dark drama, a lighter drama, a comedy-drama or a comedy. I’ve done them all. Over 15 episodes, not one has been the same.”

From a career spanning more than 32 years in the director’s chair, McCutcheon has worked on shows including Good Witch, The Listener, Relic Hunter and Goosebumps, though it’s a mid-1990s series called Forever Knight that he believes was truly ahead of its time.

The show followed a centuries-old vampire living in modern-day Toronto and working as a homicide detective, naturally working a lot of nights. “This was long before the whole vampire thing, way before Twilight took off,” the director recalls. “Creatively, it was an amazing show because within the context of every episode, something in the present would cause him to look back at his life. So within a contemporary cop show, we were doing period flashbacks.”

In pre-production, McCutcheon describes himself as a sponge, soaking up the creative ideas of the showrunner, writers, producers and others before setting out his plans for a particular episode.

“I leave all of my creative decisions open,” he explains. “I don’t lock myself to anything early on because I want to engage the other creators I’m working with and I want them to feel free to bring their ideas and vision too.

“That goes for casting, too. I always ask my casting directors to surprise me, to think outside the box. Maybe a role is written for a man and we decide to cast a woman. And it’s the same with my locations and designers – I want them to show me what they’ve got. Then slowly, as it comes closer to production, I take everything and mould it to what I think works and what’s best for the show and I take it to the floor.”

Once the cameras are rolling, you’ll most likely find McCutcheon close to his actors and the action, instead of sitting behind a distant monitor. “There’s an intimacy there; that’s where my actors are, they’re right there a few feet from me so when I cut, the discussion starts right away,” he says. “I’ve seen directors yelling from the monitor and it’s an impersonal way to do it. I’m literally standing beside my camera operators and it’s just a more intimate, collaborative way to work. Producers know that of me, that I like to work intimately with my colleagues, and I hope what I try to do is show a great deal of respect for what everyone around me does.”

The emergence of a ‘directing producer,’ often taking on some of the showrunner’s production duties, is just one of the ways McCutcheon has seen the television business change during his career. He points to one example working on Beauty & The Beast where the showrunner would be based in the writers room in LA while the directing producer, who had responsibility for the visual elements of the series, could often be found on set in Toronto.

“The directing producer handled all the day-to-day production elements of the show, and we’re finding a bit more of that these days,” he says. “Even if there isn’t a directing producer, the director is quite often left alone. There’s not necessarily a producer on set looking over their shoulder. You work closely with the writers during pre-production, sit down for a tone meeting and, at that point, the showrunner gets very explicit as to their intent on a scene-to-scene basis regarding how the show will be shot. But usually, after that, they send you off with their blessing and you’re making all the decisions.

“A director brings a lot, even to the most formulaic episodic television, and that’s what producers and writers are looking for. They want someone to bring in some special nuance here and there but to keep within the style and format of the show. It sounds like the director doesn’t have a lot of freedom, but a good showrunner sets up the parameters and lets the director go off and create.”

It’s not just taking charge of a TV series that keeps McCutcheon on his toes, but, in the case of Murdoch Mysteries, the complexity of block-shooting an elaborate murder mystery means he must also juggle multiple red herrings, dead ends and shifting suspects on two different episodes simultaneously. “But it’s particularly interesting and is part of the challenge,” he notes. “The writers want to throw the audience off, so you’re constantly shifting gear. You have to keep your wits about you.”

Behind the camera, McCutcheon is keen to share his expertise with the next generation of directors, particularly women, who can struggle to find opportunities to work on a TV series and are often thrown in at the deep end without any support when they do.

“If you put someone in a position they’re not ready for, the pace and rigours of episodic television can be daunting,” he says. “If you’re not ready for it, it’s very difficult to succeed. So I want to be in a position to mentor and share my experience so they’re shadowing different shows and have the chance to watch a director at work.

“I’ve had people help me along the way and, in this industry particularly, everybody needs a helping hand. I’m at a stage at my career now where I’m always willing to give someone an opportunity because I was given them along the way. It’s really hard in this industry and you need someone to help out.”

It’s at this moment that McCutcheon also says he feels more confident and energised than ever, predicting that his best work could be yet to come. “That’s just because of where I come from, the mistakes I’ve made, what I’ve learned along the way,” he adds.

“I’m in my stride now and there’s a confidence there that permeates to the people I’m working with. I still make mistakes but I’m making fewer of them, I hope. It’s an exciting time for me right now.”