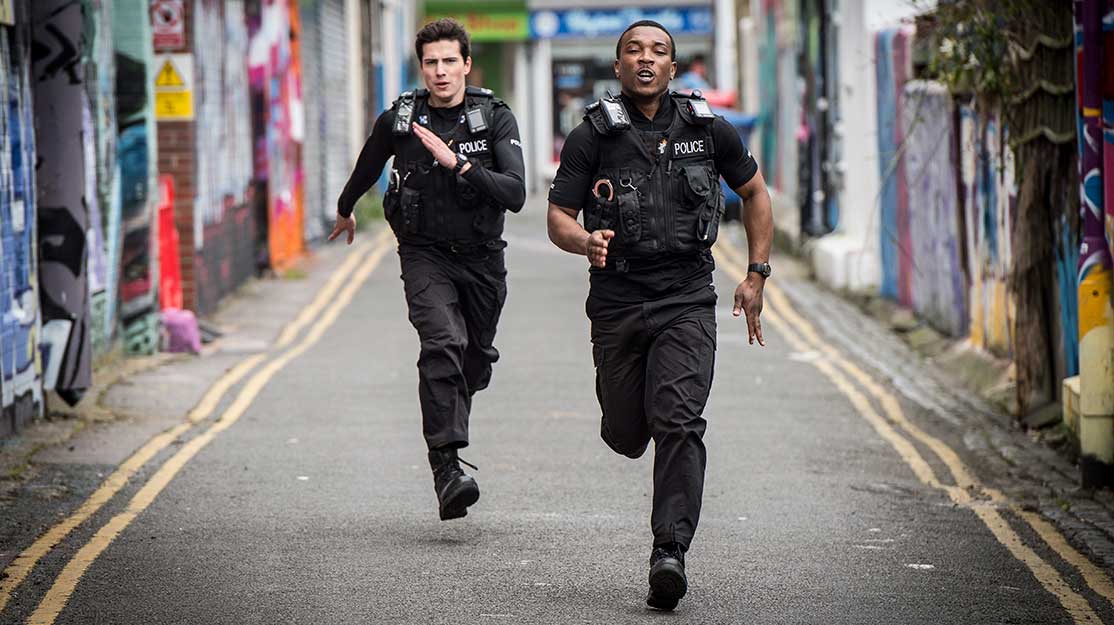 A cop show with a difference: DQ gets to grips with Cuffs

With crime and justice continuing to be staples of drama, each new series is challenged with coming up with new and innovative ways to hook audiences that may be tiring from stories about cops and robbers.

But for their latest production, executives at Tiger Aspect were not only tasked with refreshing the traditional police drama but also making the first drama commissioned by BBC1 for its 20.00 slot in eight years.

The result is Cuffs, an eight-part series that introduces viewers to a cast of colourful characters putting their lives on the line to protect members of the public.

Writer and creator Julie Gearey describes it as an ensemble cop show, which was brought to screen after several years of research that included talking to serving officers and joining them on ride-alongs.

“It’s different from other cop shows because what we’re striving to do on Cuffs is to make it a very character-led drama,” Gearey says. “So even though they’re police stories, they’re driven by our characters’ wants and needs, and that makes it quite distinctive compared with a lot of cop shows that are very plot-driven.

“Another big difference is the level of action. There’s a lot of action – there are stunts, car chases and fights.”

From a writing point of view, Gearey says one of the biggest challenges was squeezing the different procedural elements and character stories into each hour-long episode. In particular, there are eight lead characters, meaning screen time for each was at a premium.

“It’s challenging to write, juggling all those different stories and making sure the connections work and the relationships work,” she says. “It’s great to have such a big canvas. Our cast is incredibly diverse. They’re very authentic. They’re quite idiosyncratic as actors, and that gives the show the kind of truth and authenticity that we’re looking for.”

With a background working on shows such as Coronation Street, Prisoners’ Wives and Secret Diary of a Call Girl, Gearey is used to writing relationship dramas. So it’s no surprise that she relished the opportunity to pen some big action sequences, which included a raid on a farm, scenes featuring armed cops and the use of helicopters.

She adds: “Cuffs is a mainstream show. We’re going out at eight o’clock. We are looking to appeal to as broad an audience as possible. They’re challenging storylines but they are, hopefully, accessible to a mainstream audience.”

What Gearey has managed to do is “capture a kind of realism that you rarely see in cop shows,” he explains. “There’s a well-trodden path with cop shows in Britain. It was time for it to be refreshed and shaken up a bit. Cuffs has a beautiful balance of comedy and drama. It has a wonderful cast. The characters (Gearey) has brought to life inhabit this world perfectly. It feels very fresh and new and honest.”

Philipson, who has worked on other dramas including My Mad Fat Diary and Our Girl, says he was attracted to the project not only by the writing but also by Tiger Aspect.

“Working for the company behind great dramas like Peaky Blinders and Ripper Street was a no-brainer for me,” he says. “The scripts, they fly along. I haven’t seen a script that was such a page-turner for quite a while, and also one that was so jam-packed full of action, characters, events, scenes and locations. The other thing I loved about it was the setting. Setting it in Brighton was a stroke of genius. It’s such a visceral and colourful place in such a small, condensed area. You have a wide variety of people and places and backdrops. I’m amazed it’s never really been used before as a main location for a drama.”

Philipson also has a background in documentaries, and working with the police in particular, so he says it was easy for him to embrace the world in which Cuffs is set.

As for his visual style, the director says he and director of photography Rasmus Arrildt (Forbrydelsen, The Killing) were able to explore a range of techniques, from handheld to steadicam, and using a dolly and track.

“It’s very eclectic, but it really works really well, because the script is eclectic,” Philipson says. “The stories are quite eclectic and fast-paced. You jump around a lot, and there are a lot of protagonists and a lot of different stories. It helps with that. There’s no real one style. It’s everything.”

And, like Gearey, Philipson says the scale of the series and the prospect of bringing together multiple storylines in each episode provided his biggest challenge.

“There’s a lot happening, and a lot of characters. You’ve got to make sure you connect with them quickly and easily, and that every time you go to them, you know exactly who they are,” he explains. “This may be a hindrance, but I’ve loved it. It allowed me to pull together an eclectic cast. The cast have been fantastic, and they’ve brought the characters to life. Everyone is distinctive. You cut to them and you know exactly who they are immediately. They’ve been fantastic to work with.”

The chance to pull off some audacious stunts on screen – including a JCB smashing through a shop window and a car chase across a university campus – were also highlights for Philipson, who says Cuffs has something for everyone.

“We’ve got amazing storylines. It’s very dramatic. It’s surprisingly funny at times,” he adds. “It has a cast where there will be someone there that someone loves to watch, if not all of them. I think it will be a real family pleaser, both young and old.

“The atmosphere on set has been ridiculously funny. I really hope that reflects in the quality of the work, because it’s been a very relaxed set, and there have been a lot of laughs. This job is definitely the most enjoyable, most rewarding job I’ve ever done.”